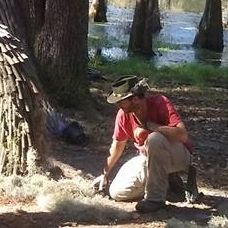 I earned my Bachelor’s degree in Philosophy/Religion while serving in the US Navy as a sub hunter. After graduation, I worked as an art director in the newspaper business and published a syndicated cartoon strip. I am a self-taught software engineer producing solutions for Autodesk, Cisco, Cure Autism Now, EMC, Stanford University, Sun Microsystems, VMWare, and The Weather Channel. Some of my code has been mentioned in Wired Magazine and I co-authored a technical manual for video streaming servers. I have launched several software products over the years while pursuing commissions in outdoor sculpture. I have had working galleries in Asheville, Black Mountain, and Boone, North Carolina. My commissioned art installations were seen at the Black Mountain Music Festival, Hulaween, Electric Forest, The Love Burn, and Envision Costa Rica. In my hometown of Beech Mountain, I served as Education Coordinator and later President of a 501(c)(3) non-profit organization dedicated to wildlife rehabilitation. I was later appointed to my town’s planning board and ran for town council. I am the chairperson for my county libertarian party but my heart is in Bioregionalism. My first book was released in October of 2018 called the Spell of Six Dragons. My second book, Blueprints of Mind Control came out February of 2019. My third book, The Technology of Belief was released in the Fall of 2019. Quantum Rapture was published in May 2020. Best Apocalypse Ever was published in May of 2020. I have been producing a livestream and host a dojo since 2019.