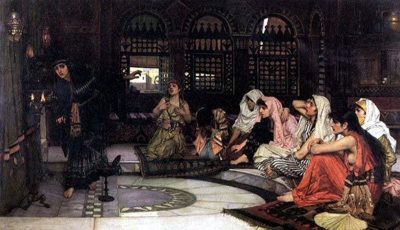 In 1400 B.C., a young man, Kamesh, led his trip of a dozen goats along a craggy ridgeline of laurel overlooking the Mediterranean. They were migrating dots on a green finger of rocks spilling into the cobalt sea. The crescent bay they traversed would soon be sacred ground. Geology had split the earth in a jagged scar making access difficult. Kamesh found a flat knoll where his bearded tribe collected fresh grass with their teeth. One of the goats had ventured beyond the knoll where Kamesh had gone to fetch her. She claimed a tall chimney of rocks too steep for Kamesh to reach. Leaking cracks of ethylene gas poured from a cavern making his thoughts blurry. Kamesh, now enthralled, threw sticks and rocks to drive the goat down but the beast was intoxicated in the sweet aroma. It bleated a song of revelation from its tripod of hooves straddling the granite towers. Kamesh watched as his goat call forth a Copper God from the Golden Dawn. The goat had summoned Apollo to claim this knoll a temple at Pythos, the site later known as Delphi.

For the next millennium, people would pilgrimage here to commune with the Oracle. The goat was replaced by a young female virgin groomed from the local village. She was the Pythia, the voice of the Pythos, and the lips of Apollo. She was the living archetype of the intuition. The Pythia answered questions from pilgrims in a monthly ceremony. Above the entrance of the Oracle’s temple, it read in Greek, “Know thyself.” Her legend grew as people would come from hundreds of miles for a chance to consult the Oracle. The Pythia was made famous by Homer and consulted by many a Roman emperor. To seek the Oracle was to surrender one’s own will and reason.

A sister drew Caspia’s hair from a copper basin of milk and honey. A brigade of giggling maids had spent the prior evening weaving flowers, seashells, and berries into ceremonial garlands. They braided and weaved Caspia’s mane around a crown of laurel. They wrapped her virgin body with gentle linen and draped garland behind her back and around her elbows like a shawl. Caspia was the sixth Pythia. She was chosen last night in the taking of auspices. Two Cretan priests saw a flock of starlings split into three, then again into two. Caspia’s destiny was won as the newest Pythia of Mount Parnassus and the bride of Apollo.

Caspia officially became Pythia before dawn in a ritual bath. She rose anew with the sun into a seat of laurel atop a tall copper tripod. While grasping the leaves between her fingers, she unturned her spine in a slow pulse of tornado and meditation. Rapid breaths pushed her deep into the trance. Creams of sweat gathered underneath Caspia’s chin as her brain’s theta waves entrained with the gamma. For the next day, Caspia was a passenger of her intuition. Her lips answered questions before the sound met the perimeter of her ear lobe. She spoke on things she did not understand from positions she could not relate. She would stop mid-sentence with the confidence of a lion and change direction with a sweeping of the tail. She clutched branches when she felt doubt and only spoke when she relaxed. Caspia was possessed by confidence as her reason stood dumbfounded in the corner. The Temple of Apollo had consecrated Caspia the goddess of intuition from a fancy flight of birds the night before and the song of a goat made thirty years ago.

Modern-day oracles are still around and qualify themselves on paper. They dress for the ceremony in white collars and silk ties. The modern business suit bears the same trappings as a priest. Our judges wear black robes while our witch doctors wear white ones. The professional Pythia have business cards and call themselves experts. Like the Cretan priests of Delphi, they understand the power of belief and branding. We pay them to spill their guts and point us in any direction. But today’s oracle surrenders himself to regurgitation instead of intuition. They are drunk from the same gas that flows from a different crack.

What’s important about the Oracle is the revelation into the power of belief. If the Oracle said someone would prosper by following a certain path, that pilgrim left with the power of belief. They were supercharged by a virgin on a tripod. There is a measurable effect seen on the man’s life who believes the gods have assured him he will succeed. He is walking in the light of divine assurance. This confidence meets him every morning when he steps out of bed. Think of the stories of professional athletes wearing the same socks to win a game or the totems and charms of stuntmen or fighter pilots. We all seek the Oracle. We all look for something with enough pizazz to fool our intellect into letting the intuition come out and play.  We are the face behind the mask we don’t want to see.

Fooling ourselves is the purpose of divination. From the flight pattern of birds, tea leaves in a cup, cards in a spread, or flips of a coin – chance is an instrument of surrender. We tell our intellect to sit down as we abandon the will to chance. We are handed a verdict empowered by the authority we invest in the Oracle. This yields a profit for those who lack belief in themselves. This is why we only consult an Oracle when we have doubt. Oracles are how we extract confidence.

Phillip II of Macedon went to see the Oracle in 350BC. He asked her if he would defeat the Persian King in the eastern Mediterranean. The Pythia waited patiently for her intuition to breach and said, “The Bull is crowned. All is done. The sacrificer is ready.” Phillip left with fate’s promise of victory as he won against the Persian Army. But the Oracle’s decree remained true through the Spring when Phillip was stabbed by his ex-lover. The assassin’s motives were silenced by three killers in league with Phillip’s son, Alexander the great.

The Oracle at Delphi was a success for a thousand years. There is something to be said for honoring one’s intuition. But instead of a perched virgin, anoint yourself a sober Pythia. Direct the energy of your confidence back into your own temple and be fully seated. Man is the trinity of compassion, reason, and intuition. Your soul was brought here to tap into your internal wisdom. The more we surrender our power away, the more we will reincarnate to try again. Tell the moon it’s your last ride on Gaia. Our lives are an alchemy of self-confidence. Next time you seek the golden consult, make a pilgrimage to the mirror and look deeply into your own laurels for the answer.

Amazing thank you, the law of attraction brought me to this writing. It made a difference. Namaste

Which 2 of your books would you recommend first?