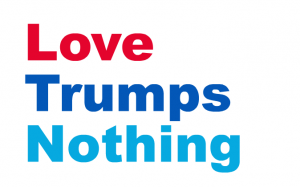 As I charted my way through the drowning crowd, I locked eyes with some of the children. They clung like castaways to sunken parent shoulders. Big needy eyes asked me if I would help their mother. I saw the future of our nation weaning on emotional dissonance. Under fascisms brilliant rainbow, on this canvas in four dimensions, curtained by oak trees underneath a purple moon, a symphony of people played “Love Trump’s Hate”. This was the most attractive village mob I had ever seen.

Emotional fascism is a doctrine disguised as a feeling dictated through a collective. This doctrine is enforced throughout the hive using virtue signaling and passive shame. Those who mimic the collective doctrine are rewarded with energy from the group. Those who do not reflect are neglected i.e. shamed. Emotional fascism is an invisible agenda of emotions everyone has been auto-subscribed to. This emotional agenda comes from outside the body. It is implanted like a song. There is no self-soothing it since the emotion is externally controlled.

You find emotional fascism in safety pin bowls passed around at food co-ops after the election. You see it when you buy a ticket to a Broadway musical only to be held hostage by a colony of actors scolding their patron. Innocent travelers meet it during a traffic protest on the freeway. Self-employed students see it when they find classes cancelled for a “cry” day. This secret handshake of assumed devastation serves as a golden ticket for poor behavior. Emotional fascism is slander for cookies. It centralizes a shame vortex and begins to feed a pseudo hive. People start to ask each other with their eyes “How do I feel now?” All of this implanted from a corporate slogan “Love Trump’s Hate”.

I can imagine seeing energy in the raw as it flows through this crowd’s atmosphere. This is not a vortex of love and compassion. They were up to their waist insisting they held the highest ground. But it wasn’t high ground. The Love Trumps Hate event presented as solidarity showed itself as a silent parade for wounded cock strutting. One parent “pulled my kids from school.” Someone raised her with “it put my mom in the hospital.” It was as if a thousand soccer players cried, “Foul!” as they wriggled on the ground for attention.

Everybody loves a melodrama. But the kids don’t know it’s pretending. How do you explain a contra-dance of virtue? A child overhears mom say she is devastated. A child learns this must be what devastation looks like. All they could see was negative energy masquerading as positive energy sucking all the other negative energy pretending to be positive energy. Their parents were tuning forks wrapped in skin. They were vibrating their children’s emotions into a cauldron of drama and darkness. Dipping their torches as they whispered, “it’ll be okay.”

Who could wonder why this country is roaming with hollow people. Twitter conscious zombies are trying their best to mark themselves on the public yardstick of conviction. This is not new. Who has the tallest ten-gallon hat? Who’s got the curviest petticoat? This posturing has gotten tricky. We’ve mingled our estrogen with testosterone. It’s so confusing being anything. You can have passion, but not too much passion. The only time women may fart is in yoga. The only time men may scream is at some primal retreat away from the civilized public. We have arrived at an epic vista overlooking a foamy ocean of citizens all scrambling to win King of Mount Virtue.

We’ve lost our core. We no longer command our personal boundaries. We ask the community to define them for us. It’s the role of government to provide us a custom booster seat at the table. We’ve convinced ourselves we are selfish. We compete for the privilege to tell each other we’re not worthy. We sip from the sugar found inside the lips of pity. This will never sustain us across life’s big ocean. It gives us just enough to keep hovering in the breeze. We are trapped in a cage of wings. We have reduced ourselves to a nation of vampires. We define everyone’s boundaries but our own.

This happened when we decided we were no longer capable of independence. We’ve decided we’re not to be trusted. We’re too racist, too sexist, too ignorant, too naïve, and too human. We’ve delegated our stewardship to the E.P.A. We’ve farmed out our compassion to F.E.M.A. We’ve bowed to the 30-foot P.C. Gorilla that kidnapped our precious lady liberty. We’re afraid of the wall. We’re afraid of not having one. We’re going nowhere as fast as we possibly can. What keeps happening? Our disgruntled toes keep squishing us deeper in shitty pudding.

Love trumps nothing. Love has no enemy. Love is not here to convince you you’re the good guy. Love does not call for the obedience of minions. Love is not here to take home a democratic trophy. Love comes when you find yourself broken. You only know love personally. Privately.

I told them all the truth with my bewildering face. You cannot co-opt love’s precious definition. Nor may you tarnish it atop a slogan that closes with the word “hate.” That word was your idea. You insisted it belonged here. You have a sign to prove it.

Maybe your just a psychopath