This is part two from The Anatomy of Satanism in Hollywood. 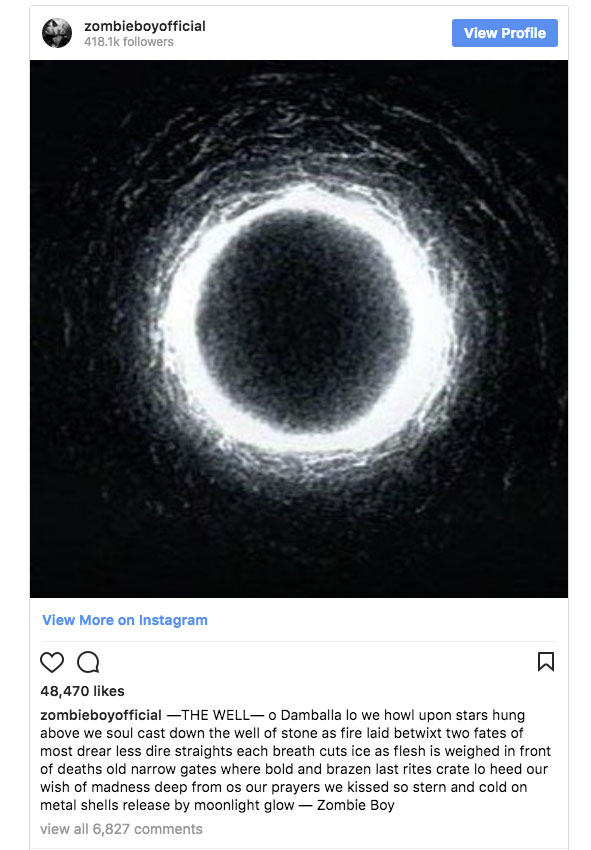 Rest in peace Zombie Boy. Gaga loved you because you were willing to peel your own skin off to be near her. A man allegedly committed suicide on Lammas Day, August 1st, 2018. The day marks the Sabbat Festival, the beginning of the Wiccan harvest. It calls for a human sacrifice of any age male or female. Zombie Boy was a model priest. He was serving his Queen Lady Gaga. Zombie Boy was the official 2018 Sabbat Sacrifice. He announced he had been chose on April 19th saying, “Since Fate, strikes down the strong man, everyone weep with me!”.

Zombie’s final words were typed into Instagram on Aug 3rd from the bottom of a black hole in a picture. He posted his last utterance to 418.1k followers. The punctuation tells you he wasn’t communicating with his reader. The capitalization shows you he was reciting this to himself. He played this phrase with his mouth like a mantra. His spell created echoes in every digital witness. There were 48,470 Likes, and 6,827 Comments.

Zombie Boy gave himself to the black deep. He slipped himself into a hole dug deep into his chest. He lived off his depression spiked with a Queen’s dopamine. Gaga’s finest poison. Imagine the size of the black-hole swirling in this man’s chest. Surrounded by watchers, each occupied with their own contracts. No one got here for free. Zombie had abandoned his own skin a long time ago. The suction from his exodus pulled him straight into the anti-verse. 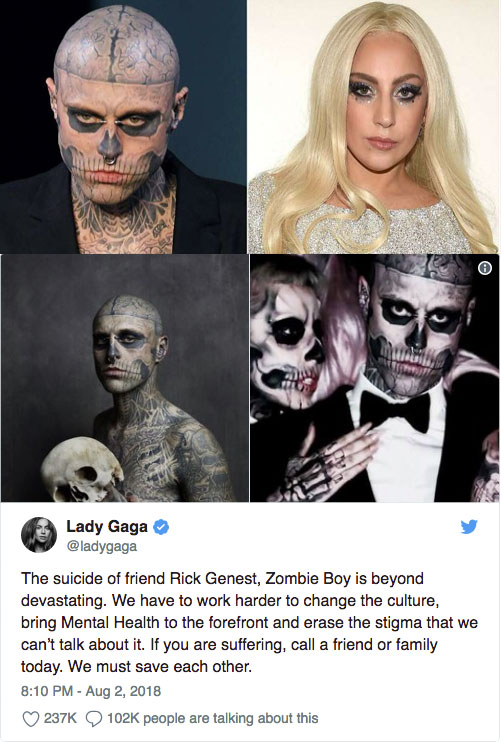 As Zombie Boy took his own life, the ring in his ritual turned into a tunnel of light. Gravity gave him up as he ascended. Zombie’s corpse wonders if he will be accepted. His ascension slows while his heart is weighed by a golden feather. A piece of him is missing. He can see it floating before him. Zombie gazed into the eyes of his own judgement as he sank out of the scene and downwards into oblivion. He knew where he would be going. He did not know what to except when he got there.

As he faded into black, he lost all concept of motion and density. He felt a wriggling as if he were underneath a slimy skin of chicken. His spine was soft cartilage. He had been curled into the shape of a question. He was fully conscious and inside a brand new fetal body. He realizes he will be returning to gaia. He weeps behind eyes that haven’t opened. For the next nine months, the former zombie boy gets to gestate on how he got here.

Months pass. A stargate opens beneath him. A doctor pulls him into the universe by his tiny knees. He feels the cold sting of atmosphere. He panics in the cold gush of oxygen. It is making him slowly forget. The lights are too bright and the nurse is slapping him. He tries to speak his story for someone to write it down but no one will listen. He has to remember how he got here or no one will hear his dying secret. He struggles behind his tiny new vocal chords. His brain is congealing as old memories are buried forever below a deluge of new information. All he can do is scream. A sweet milk comes pouring down his windpipe. The taste is too powerful a concoction. The life of Zombie Boy is forgotten in the first taste of sugar.

The next morning, Gaga showed his plucked heart to the people. Read Gaga’s last words about her Zombie Boy. When she says, “beyond devastating” is that the same as “sad?” Gaga calls the powers of mental sickness to the forefront. While holding the head of Zombie Boy, Gaga says, “We must save each other.” A tribute of 237k Likes and 102k comments are tossed at her feet. Gaga’s words are impeccable. Read her spell again, carefully. Her people are celebrating a ritual sacrifice. Gaga is proclaiming the boy’s death will bring her colony salvation. Every mind will be cleansed from her ritual. 339,000 people applauding a Queen for pulling a heart out of someone’s chest without lifting a finger. 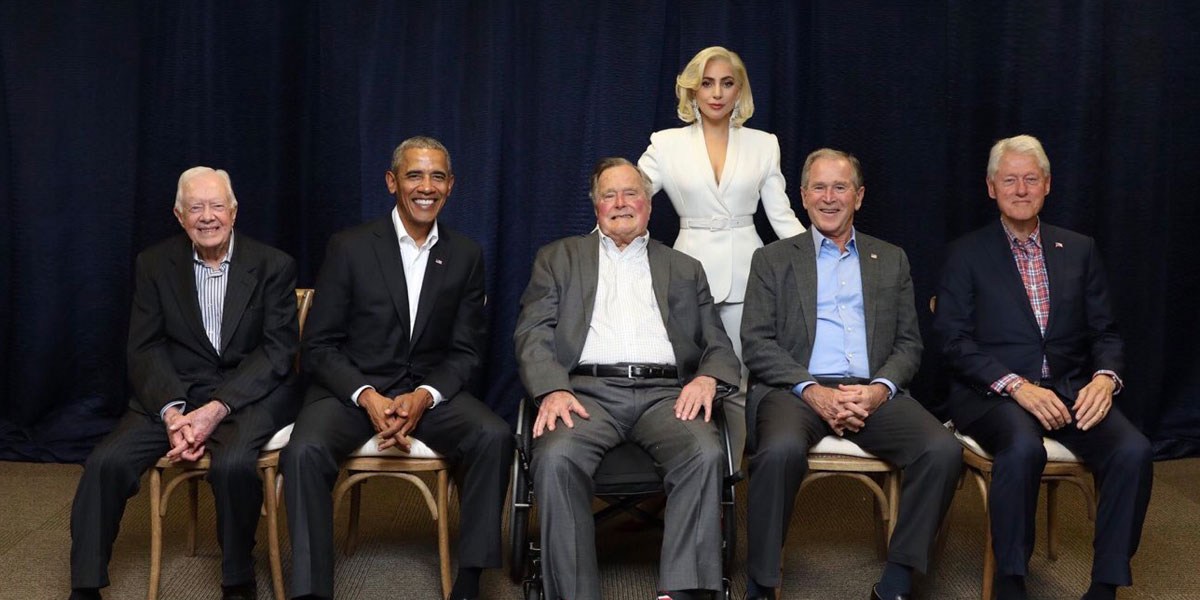 The powerful never smile because they don’t have to.

Every Hive has a Queen

A Queen stirs her colony with frequency and vibration. Her song penetrates the body of each bee turning it into a speaker. A hive will buzz to resonate a queen’s primary signal. Devotion becomes obedience. They gather her pollen with moistened fingers. They fly it home without question. They castrate themselves to give to the collective. They are desperate to return home to her temple of golden honey. A million zombies with wings, confusing flight for freedom. Each one insisting they have never been asleep.

The spell of the Queen only resonates in an empty chest. Drones were once people made hollow through self-abandonment. Hollywood encourages all of us to celebrate the actor. An actor is a personality that’s been gutted like an avocado. We celebrate them as the golden child. “The oscar goes to Zombie Boy.” We give a piece of ourselves just to be in their congregation. Once inside the show, the queen’s sound can fill a chest’s abandoned chamber. We feel whole again from the buzzing. We are quenched by the sound of a queen’s buzzing. The cavern we dig inside our solar plexus is our welcome to the machine. 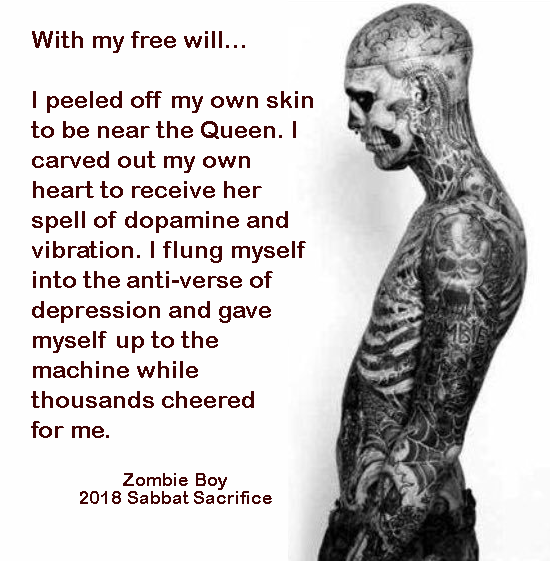 Welcome my son
Welcome to the machine
Where have you been?
It’s alright we know where you’ve been
You’ve been in the pipeline
Filling in time
Provided with toys and scouting for boys
You bought a guitar to punish your ma
And you didn’t like school
And you know you’re nobody’s fool
Welcome my son
Welcome to the machine
What did you dream?
It’s alright we told you what to dream

Part Three The Satanic Ritual of 9/11.

There’s so much about her and people just worship her writing off all her blatant symbolism in her videos, her songs, even her roles in AHS…. there’s more than one account of hotels being disgusted with cleaning her room after a tour weekend, finding “red rings” in her bathtub and knowing full well it was blood. She’s a demon for sure. I know a celebrtard is on the illumanutty side by how hard they speak against Trump and the rest of us that don’t want to accept their lies and garbage “morals”. The whole A list and B list star system is deeper than just who is worth more money and gets more jobs; A list is who gets to command or sit out a sacrifice, and B, means Beta; they always must do what the A list doesn’t want to do publicly or take the fall. Gaga’s an “A-lister” so we know she’s done a LOT of demonic things to rise up so fast so high. The slow risers and ones that cherry pick projects where you don’t see them as prominent aren’t sacrificing as much or at all. I mean. Some really sub par talent is A list, and we all know they’re there because they were willing to disassociate and do the worser things to get there. CHICKENS ARE COMING TO ROOST, don’t worry. Their time is nearing, that’s why they’re punishing America and burning us up, trying to imitate Hell in some grand ritual. They’re making *us* experience what *they will* for real one day, because we will NOT be going to Hell as they are.

Exactly! Well said and exactly what I and others I know think and know!

This creature is pure evil. It oozes from every pore of her body. She ritually murdered a woman named Lina Morgana…stole her identity and then a year later became “GaGa”. The woman’s mother knows her daughter did not kill herself. She was sacrificed.

Where is Jesus Christ everybody is talking about these sick satanist and how they run the world Illuminati etc. when do the good guys come in.

Why did Gaga wear a meat dress????

What kind of species was killed for its flesh???

Did Gaga assume more than one identity in order for her to rise in the Luciferians? Push her friend to her death, take that identity as a newbie, then take on more levels of demons as she rode that snake?

Who was she when she sang with Tony Bennett??

Have you ever looked into the cornspiracy of the original Lady Gaga identity being stolen by this Lady Gaga after she was killed . You might like it . I think I saw it in a Abramovich thread

You’ve articulated this issue in a way the world needs. Mankind is awakening from this sick, satanic spell, but it’s still very difficult to get those still plugged into the fetid satanic trance to see (really see) it. These articles, while not palatable to the laity yet, go a long way towards building a foundation of understanding that will allow us to get through to our brethren.

I will keep following your work in the future.

I am trying to wake up. Please, help me.

What’s the first thing you do when you wake up in the morning? You open your eyes and see. Awareness is all the help we need to awaken.

Matthew 11:28-29 (KJV) Come unto me, all ye that labour and are heavy laden, and I will give you rest. Take my yoke upon you, and learn of me; for I am meek and lowly in heart: and ye shall find rest unto your souls.

Barbara, join me in starving the Beast system. I will no longer support the wickedness and evil by paying to watch their movies or listen to their music. I will no longer consent to their evil manipulations and my own complacent slavery. Unplug from the Beast system glamour-infused, cursed music (it’s ALL created by witches) constantly being played. It doesn’t matter what genre: country, hip hop, rock, old, new. Fast from movies, social media and music to give your mind heart and soul a rest from the mind control and deadly manipulation. (Imagine if we all stopped buying their movies and their music, they’d have no money no fame no power. )You’ll start to hear your own heart, your own thoughts instead of the alluring, deadening messages of satanists and luciferians. Maybe you’ll be surprised to see and hear the one true God who came to us in Jesus Christ.

Yes!!!!! Yes!!!! Yes!!!!!
Finally, someone says this! I need to do this immediately!!
I hope and pray im not the only person that’s soul felt convicted by this comment!
Thank you Francoise

Awwww Sweet Barbara, there is a lot to know and it is really gross and very painful to learn. It’s everywhere and in everything, don’t use google but instead use duckduckgo.com to do research, google censors truth. Look up Population Control and go down the rabbit hole from there. Remember though, Reach out to God for some light so the darkness doesn’t hurt you more than just having to face truth. Good luck!