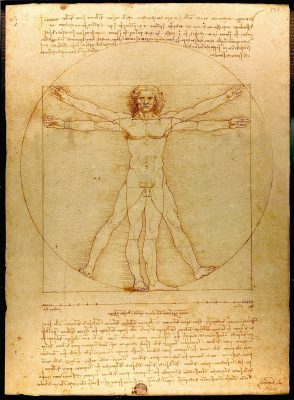 I am under the impression Leonardo da Vinci’s Vitruvian man is a drawing of Adam. The figure bearing double arms and legs exposes Adam’s chimeric nature. Notice the feet. One set stands on the base of a square while the other on the circle’s circumference. This is a brilliant way of representing two manifestations sharing a single form.

Created in 1490, the sketch was Leonardo’s reflection on the works of Vitruvius. His quoted passages read like a decree, “The ideal body is eight heads high.” ”A palm is four fingers.” “A man is twenty-four palms.” Leonardo did more than contemplate the ideal ratios. He expressed them perfectly in a single illustration. Leonardo was demonstrating the chimeric man as the epicenter of golden proportion.

A chimera is a single organism composed of cells with more than one distinct genotype — two unique DNA in one body. Plants, animals, and even humans all have this dual-occupant capacity. A normal human body can house two unique DNA, two immune systems, and two bloodstreams. This fact is not a mutation, it’s a feature. One could argue the body can host four genotypes. A hermaphrodite is a variant of a tetragametic chimera with both male and female-specific markers in their body. Like twins inside of twins. Chimeras are not genetic anomalies. They show us an ancient footprint from our genetic past and shed light on how we got here.

Before Adam and Eve there was AEdam, the chimeric human. He was a different kind of creation than today’s man. He was the protoplast, the first-formed. His fall from Eden has been a genetic library unpacking itself through time. We remember our genesis archetypally in the story of the ark and a chosen genetic family charged with spawning the earth. Only now, in the days of CRISPR and GMOs do we have the context to conceive how all of this was possible. As we track our creator’s footprints we slowly discover they resemble our own. Leading us to the conclusion that neither the chicken nor the egg was created, they were spawned.

I cover this topic more in my livestream, The uncut story of Adam and Eve