He sat upright like an emperor in a square chair made of wood. Each hand rested on each knee like a capstone. His eyes were closed. He went exploring. He rotated his focus from behind his eyelids towards the center of his head. He crawled on his belly into the gray folds of his wet brain. Just below eye level, towards the rear of the skull, he located his pituitary. He could almost stand up inside as he turned to face forward in the cockpit. He climbed up a grand gallery into the king’s chamber, the pineal gland. This room sits above the eyes and just forward of the spine. He moves himself to the very center of the chamber. The energy from the parabolic shape of his skull was focused like a magnifier. He was in the control tower of his endocrine system. From here he can throttle his entire body with adrenaline via his throat, kidneys, and testicles.

Adrenochrome is a chemical compound produced by the oxidation of adrenaline. Blood addicts extract adrenochrome through torture and blood-letting. The psychological torture produces the chemical in the victim’s bloodstream and can be ingested. It is said to produce a feeling of intense euphoria and power. It becomes highly addictive and bonds the user’s brain to a new high threshold turning the user into an instant addict. This is what the Aztec were doing. In school they told us sacrifices were performed to help crops grow. They were actually doing it to get high. Not all Aztec bloodletting ritual were sacrificial. Bloodletting was common and even included children.

This blood was collected and baked into bread. The heart was considered the most potent. The adrenochrome was strongest when the heart was still alive. Deers, chickens, snakes, and even butterflies were farmed for adrenochrome. It comes from tears, too. The entire body excretes adrenalin. Tlaloc, the god of rain, would ask for the tears of children and they were sacrificed to him. Adrenochrome extraction can come from burning someone alive. The smoke is vaporized adrenochrome. Before you tell me that’s impossible, explain why South Korean customs found thousands of pills filled with powdered human baby flesh.

Once a town burned it’s first witch, or made it’s first sacrifice, it turned into a weekly carnival. The fires reached their peaks by the mid 16th century. Historians ignoring adrenochrome will tell you it was the professional witch hunters who were behind all of this. But the town was getting something out of it, also. They were getting high off the ritual. That ritual brought commerce. Whether they knew it or not, the burning of flesh became the town’s new focus. Townspeople were being rewarded with dopamine for ritually murdering one of their own citizens. Who was next on the stake became a sociopathic chess game of scapegoat vs flying monkey. Towns were ruled by the whimsy of fourteen year-old girls. Everyone’s senses were heightened by the psychotic mushroom called demonology.

In 1555, Near the town of Derneburg, Germany, Gareth Longsack was tending the fields. He was thinking of the most pleasurable moment of his life. It had happened 10 years prior. Gareth made hay with his new wife, Lillian. He felt her naughty bits against the rickety walls of their new swine cart. The euphoria coursing through Gareth’s bloodstream set a new high in his brain receptors. This was Gareth’s apex moment. His consciousness was the most awaken it had ever been. This became Gareth’s north star and for the next 10 years, every other experience was compared to this one. Our minds are built around these north stars. Gareth’s mind had centered on a wholesome, moral moment. His highest ideal is forged in dopamine. When he thought about Lillian, his mind secreted a bit of juice as if to tell Gareth, “yeah, i remember that, too.” 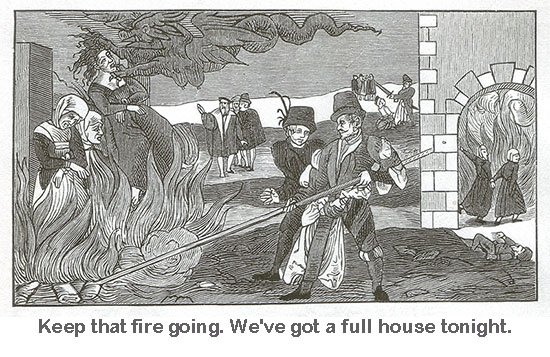 It was only three months later, when Gareth was in town and witnessed his first witch burning. The fumes were intoxicating. Three women were cooked while the town was chanting “evil.” The ceremony was white-washed in the psyop of justice. The minister explained they had no choice, the devil must be confronted. The bindings used on the victims would burn off sometimes so men would volunteer to push the victims back into the fire. This entire experience infiltrated Gareth’s dopamine system. He had a new apex moment now. It was coated in a veneer of dissonance and toxic shame. Gareth had entered the ceremony of the checkerboard. He stood by and watched his town commit murder without hesitation. His complicancy was his consent and his body was now drunk by the power of the burning blood. His new apex of the mind, was the blood sacrifice. Every new experience Gareth had would be compared to this. This one event would forever be magnified in his mind palace.

One days in the field, Gareth’s thoughts no longer went to Lillian. He kept hearing the rumble from that fire. He remembers how vivid the moon was that day. He could see every bump. The town was chanting words over the cries of agony and melting skin. He recalled every fizzle in detail. He could not process why justice could feel so tantalizing. Gareth was now under the power of the checker. His black was white now. His white was black. The poles of morality had been severed from their stand and were free to tilt and drift like a toy gyroscope. His chemicals pointed north, while his morality pointed south.

Matthew Hopkins was the fourth son of a wealthy Puritan vicar from Suffolk. He was born in 1620. Matthew Hopkins was a psychopath. In March of 1644, he accused several women of conversing with the devil. His case was so convincing he was given the title of Witchfinder General. Over the next three years, Matthew would facilitate the execution of 300 women. All of them interrogated, tortured, and murdered under the rules for witches specified in an early book by King James. Matthew wore the cloak of a jester, half white, half black. He would enter a township announcing his title and proceed to root out evil for a nominal fee. He turned towns into savage ritual carnivals. He became an adrenaline pusher. He was an alchemist.

To cleanse a town of evil, Hopkins must first insert it. He was the master of the psychological operation. The town of Mannington was his first false flag. He claimed a group of women were overheard speaking directly with the devil. When he confronted them, they naturally denied it. Hopkins proceeded to show the town how every answer they gave was precisely what the devil would say to hide itself. Hopkins was a master of the crowd, a sociopathic maestro.

Wow! Yet again learned something new.