Does anyone else find it bizarro to hear a black former US president elected by a majority of non-black voters scolding his own country for racism and xenophobia to an audience in South Africa where they are currently participating in white genocide? Here is former President Barack Obama addressing the perils of racism in America despite the fresh burning bodies all around him. Let this be a wake-up call to you. Racism in America is a media myth.

“American Racism” is an assault on prejudice. The weapon used against it is shame. You know it’s working by how much you clench up when you hear the word, “prejudice.” There is a strategic advantage to creating a cultural DMZ zone around the word. “Prejudice” is our freedom to pursue happiness. This word goes even deeper as the very definition of our identity. Our prejudice has blazed a trail through all of our life decisions. That trail is the only proof of who we are as individuals. Prejudice is the enemy of American racism because American racism is programmed mind control. It seeks to imply we should feel shame for our inherent prejudice. It twists the word prejudice into the word, “racism” without actually proving it exists. This is a hidden assault on our free will by installing doubt in our ability to trust our own decisions. American racism seeks to curtail your destiny. American racism is a psyop turning prejudice into a taboo.

Love is the greatest expression of your prejudice.

If you doubt your inner core by believing you are inherently racist, you erode the self. You create a cavity in your own integrity by believing the con that you are flawed. Note, this same psyop is used with the doctrine of “sin.” The “equality” movement is also part of the same mechanism. These are all shame cults and they work really well. Consider gender dysphoria as a small proof of where our culture has given in to their own genetic integrity. They have turned the physical gender pliable ready to be whatever the hive requires. They turn “fluid” because they have shamed their backbones back into jelly. Seeing “racism” everywhere around them, they psychologically project their core shame at what they think are heretics.

The trauma bond is a phenomenon where a codependency develops through the witnessing of trauma. Trauma could be physical or psychological, heavy or moderate. Dissonance is a form of trauma. So too is shame. American racism reveals itself as a form of shame-bonding and is strengthened by an initial tiny lie given in exchange for virtue. One invokes the bond by declaring themselves racist in public. It is a tiny lie that the group mind rewards with virtue. This is how a hive manipulates itself using a system of recognition or withholding.  The lie is so tiny it becomes very easy to initiate and be accepted. It pokes at our empathy until we give it service. This tiny ritual is repeated in our music, our videos, our education, our life programming. The subject becomes shame-bonded through multiple tiny lies. Each one repeated and rewarded.

To awaken from this cult, one would have to publicly admit they were lying. This will be met with a strong punishment from the group and/or banishment. Add to this the social benefits of being accepted and we can see how one’s racism is a very successful yoke. it is not too heavy and rigidly constant. The calories required for self-reflection along with the known punishments are simply too much to make it a good bargain. The shame of admitting the lie is less than the shame from the group for not agreeing to it. 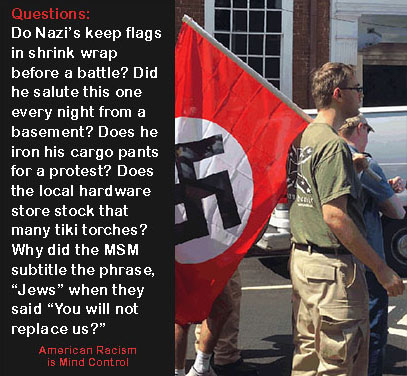 People freak when I explain racism is a myth here in America. But if you’ve traveled abroad, you start to discover the true meaning of the word. You notice racism does not whisper in the corner. We pretend people hide their racism which is why we don’t see it. Instead, it is supposed to leak out in the way we park our car, or choose a table. Like Iocaine powder from the movie The Princess Bride, american racism is odorless, colorless, but deadly to anyone who drinks it. The young Wesley developed an immunity by losing his programming at sea with the pirates.

Real racism is brash ignorance. It cannot be subtle. The ones not in charge are forced to be subtle. How could you be ignorant and knowingly subtle at the same time? The parliament in South Africa where they scream calls to hunt the white boere on the front steps is racist. It has no shame, no subtlety. It is angry, violent, and out in the open. What we in America think is racism is culturally sanctioned thought. We have been fooled into dividing each other by an intangible inner prejudice we can’t see, touch, taste, or feel. This is not racism. This is the redefining of the meaning of prejudice.

if you want to survive in America you have to remember we live in a jungle of lies and manipulations. Camouflage is a tool of survival and our country is full of survivalists. Many of them will use deception to trap you for their feeding. Some feed on your money, others want something more from your veins, your extracted compassion. This is a juice to those thirsty for virtue. if they could put it in vials and sell it on the roadside you’d see them. Your will, attention, love, and hate are all commodities to the social cannibal. You’re innocence and gullibility are a prime cut for their evening fire. Look back at history and see what racism is. Use this as a tool to see it in real life. Notice the ones who claim it is everywhere are outwardly promoting the idea one race is weaker than the other. One is a victim to another. One is stronger than the other. One is different from the other. If you truly believe in equality, Valarie Jarrett looks like Cornelius from Planet of the Apes. If you believe in racism she still looks like Cornelius but you don’t say it out loud. A racist insists Valarie Jarrett requires special treatment. She does not have the same rules as everyone else. She is protected. She is special. But how can you call someone special and give them dignity at the same time? There is no dignity on a pedestal.

How are we supposed to both come from apes and yet be offended if someone says we resemble one? This is core shame peeking out from leftist covers.

Racism is the shaming of our natural defenses 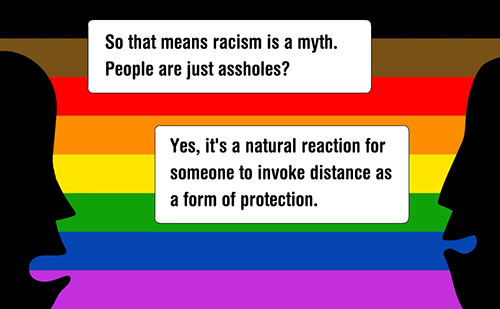 What our programming calls “racist” behavior is a natural distancing function. We should expect these traits in any autonomous life form. It would be a akin to a civilization of porcupines launching a campaign against the evilness of their quills. Or a clan of skunks who shame each other for their glands. A racial slur is an attempt to create distance between you and an outside perceived threat. In fear, the mind builds a long list of, “This is how we are different!” The ego reads over this list reminding itself there is distance. It is a form of emotional defense. Like a dog showing you it’s teeth, or a deer snorting in the dark. It is our programming that calls human acts of violence “racial violence” and only after the media prejudices everyone on the scene. At no point during an act of violence, is race a prime motivator here in America. The “racist” is either severely threatened or physiological fetishes violence. It is a decision based on the actors programming not their “systemic racism.” American Racism is a mythology. If it weren’t how could we apply it so liberally everywhere while insisting it is a subtle cancer leaking out of our nostrils when we sleep.

Who benefits from America Racism?

If you were the overlord of a massive wild skunk farm, it would be advantageous to have a way of controlling the defensive mechanism of your surfeit. The trainers would want a cheap effective tool to manipulate your behavior. Just as you make a stern noise with your throat to a dog, our programmers apply shame to us. Programmed shame is literally a dog whistle. The irony here should be noted. We detest shame, it makes us wince which is precisely why they use it.

Today’s racist is the person in the room least worried about being labeled racist. 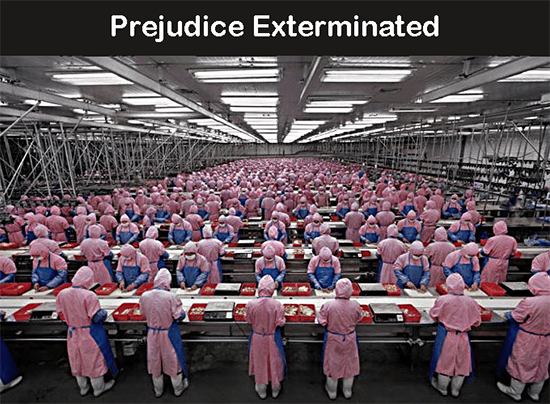 Does the white cis male truly benefit from racism? Are they truly in the role of the golden child? If you understand the role of the scapegoat, you will remember the scapegoat is never given defense. A scapegoat is worse than forgotten, their feelings were never comprehended. The scapegoat does not get an audience to express their own position. Who is the golden child in America? Would it surprise you to hear it is the broken? The homeless on the street pull sympathy from the coldest hearts among us. They are constantly given sad background music, and rescued by actors in canoes. Victims are the golden child in the land of the psychotic. This is how you manufacture dissonance.

The programmer abuses the golden child as much as the scapegoat

This programming is real and everything is upside down for a very specific reason. A master does not control a dog by pushing him. The main role of the leash is to restrict the ability to consider any other direction. The dog feels a sense of freedom. He can stop when he needs to. But there is ultimately only one direction he is given.

The instigators of true racism are behind the actions of those who pretend to scream the loudest against it. These instigators use it as a tool for mass sociopathy. This should not surprise you however because “american racism” is sinister, cunning, and veiled like an assassin. The Wizard begin the curtain. See Jim Crow laws. See the career of Al Sharpton. See historical propaganda about our own Civil War. See the blind election of a junior Senator for the pride of justifying a yoke of tiny lies. “I’m a racist and I can’t even see it.” See a party try to do it again with a woman. “I am a sexist and I can’t even see it.” See any corporation pretending to be sensitive by instituting racially discriminatory programs. These are the administrators of consumer racism. These instigator all share something in common. They hold positions of power and influence over our programming. They are our handlers.

Buying into American Racism is taking the blue pill. A spiraling descent into a cavity you must create to find it. It is programmed mind control and it has come to eat you. It is corporate gas-lighting by a cabal of sociopaths. Once you swallow that you are flawed, you doubt your own integrity. If you doubt your core it fades into the background. The duller your drum beats, the more you take direction. You become a dog, whose forgotten how to hunt, taking food from a rusty can. What choice do you have once you’ve downloaded the program.