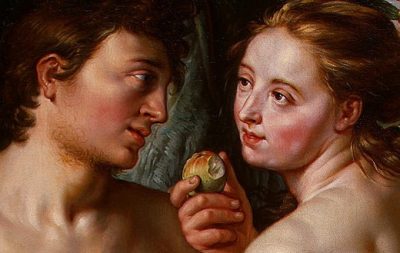 The oldest secret society we know rose from kabbalah. The first man, Adam, was the first magician. Adam, Jacob, and Isaac were all kabbalists. It was an ancient spell that cast us out of the garden. The first lie was spoken by the first black magician as two angels with flaming swords perch outside of a nightclub called Heaven. They’re following orders from a flaming tongue that said, “God told me to tell you no one gets in.” Our hearts are commanded by bouncers at the door. Peter was the first gatekeeper. His body rests in the Holiest of churches in the keyhole of the world. What if God banished no one? How can an infinite God carry the notion of exclusion? Before the first lie, the aether was a virgin. The sanctity of lips would curl the feathers of a peacock. The cabal is a 5000-year-old lie. The telling of lies is the first secret to mind control. As the tail of the snake rattles – lies turn hearing into obedience. We banish ourselves in our lies. We become our own secret society. We pretend everyone speaks the truth so people will be prone to believe us. We know not what we do on purpose.

Today, we still use their syllables. The modern-day symbology of our alphabet is charged with the first kabbalists. To utter a name is to remember. The atom is a memorial to Adam as Saturn is a remembrance of Kronos. IS is the potential from darkness. RA is the truth of light. EL is the power of plasma forging a sunrise. Is-Ra-El is the motor of seasons. The four horsemen of the Apocolypse are the wheel of day and night. An ancient meaning hums behind the veil of forked tongues. Kabbalah is the oral tradition of vocal cords. The two towers of muscle spoke every religion and ideology into existence. They spoke of Zoroaster. They spoke of Uhura Mazda. They spoke of Yahweh. They breathed life into clay and raised the golem of the pyramid. Their names are our first consult when we speak of God. Yet the name of God is a trillion voices holding the tongue in unison. 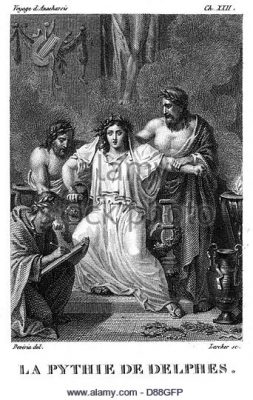 In ancient Greece, the kundalini of the earth was called the Pythia. This python was struck down by priests and replaced with a walking snake with a cane. The leviathan cut its teeth in Egypt. It struggled its way north through Rome and into Venice. It invented the con of royal blood and the spiritual monarchy. It charged the word “saint” with sanctity. It infiltrated the Church, the Crown, and corporations like Washington DC. In America, we call it Zionism. It grows fat from the lack of recognition. In WWI it formed the League of Nations. In WWII it formed the United Nations. This creature grows in our cowardice. We demand a new world order as the current one burns. Every war cements our belief in a new temple. Every monarch sells the necessity for order. We are content with their nickel and paper. We place ourselves below the elements of silver and gold. We believe every lie we’ve been told by the government.

The good news is “Apocalypse” means an uncovering. The bad news – most won’t stomach what’s underneath the sheet. Many will blame Satan instead of the psychopath. The truth of the con is so simple when you lose fear. Five thousand years ago, kabbalists wrote the script we play. Most will insist it was God since it’s the last book of the Bible. Those people will owe God an apology when the truth comes. Yes. God forgives. But we use this as a crutch to continue. We’re smarter than this. Or at least we could be.

Still, we keep swallowing the lies. On June 28th, 2001, William Cooper said, “Whatever is going to happen they’re going to blame on Osama Bin Laden. Don’t you even believe it.” Two and half months later, Bush blamed Osama Bin Laden for 9/11. As early as 1991, Osama Bin Laden was a high-value “target” by the United States and Mossad. Why did they miss three opportunities to apprehend him? In 1997, Osama Bin Laden gave a live interview with CNN. In 1998, he met with ABC. In 1999, he met with Time Magazine. In 2001, the US invaded Afghanistan. In 2003 the country established a central bank there. In 2003, the US invaded Iraq. In 2004 the country established the Central Bank of Iraq. In 2008, Venezuala President Hugo Chavez paid off his country’s loans to the World Bank. Three years later, he accused the US of germ warfare and lost a battle to colon cancer. In 2017, his successor, President Maduro, turned his back on the petrodollar by pricing their oil in Chinese Yuan. A year-and-a-half later, the US called his presidency invalid and still backs his opposition. In 2009, Hillary Clinton overthrew Honduras from the State Department. In 2011, the United States bombed Libya and established a new Central Bank before Kadafi was out of power. The architect of the world’s largest freshwater irrigation project was assassinated for not bowing to the beast of USA.

Uncovering the truth reveals America has never been the good guy. We are subdued by the guilt and shame of what we truly are. We are outcasts from the garden of morality. Banishment gives us the freedom to destroy the world. We cherish the gears that rattle and hum like beacons of democracy. We watch them crush the bones of sovereignty. General Wesley Clark told you which countries we’d attack in succession. Still, we trudge on. We are the machine forging a One World Bank. We are the New World Order saving everyone with the brutality of freedom’s ring. This Apocalypse could not come faster. 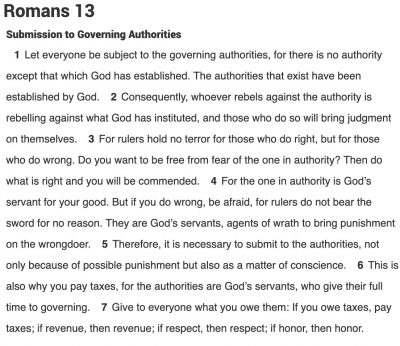 When I say kabbalists wrote the Bible I don’t mean that figuratively. Like the Qu’ran, the Bible is mind control edited by man. Every creature knows God’s version of government. God created Natural Law. God created sovereignty. God created decentralization. Read Romans 13:1-7 with fresh eyes without the fear of burning in hell. Jesus was a revolutionary. Yet in Mathew 22:21, he condoned the Roman state’s support for slavery when he said, “Render unto Caesar the things that are Caesar’s, and unto God the things that are God’s.” Belief in Abraham’s Bible requires a Satan corrupting everything in this world except the Bible’s thousands of scriptures, translated into five languages, through dozens of Popes, a handful of royals, and the bureaucracy of the Nicene Creed and the Council of Trent.

This is wishful thinking to assume Satan failed his duties to penetrate the church or the Bible. Nowhere is Satan more successful than inside a coercive church and state. if God wanted us to have a Bible he would tattoo it inside our eyelids or write it in the stars. Government is a false idol and we are commanded to worship it in Romans 13. Let’s pull the lid off. Let’s take a look under the sheets of Apocolypse. The pyramid keeps getting taller as more of us give our backs to coercive government. False gods were placed on your altar. It’s time for some necromancy. We serve God only through our consent and the belief in natural law.

Jesus/Yeshua/Eashoa did not, does not and never will condone slavery. Jesus can set you, and anyone who accepts Him, free. Shalem! JK

Can you elaborate on the following passage? “kabbalists wrote the script we play. Most will insist it was God since it’s the last book of the Bible. Those people will owe God an apology when the truth comes.” Which book are you referencing, how have you concluded that Kabbalists wrote it, and how do you describe our future meeting with God, where an apology would be do and/or possible?

“El the power of sunrise “
Pythagoras taught there was music in the spheres
Noticing how many musicians names vibrate to EL
Elvis,Elton,Garfunkle,Michael,Elroy…..

Elohim – Elite – Aliens ( also a-lie-n ) – Elves – Elect… Definetly something behind the EL.. Also the CON have many many strange connections…

Hey yea ..
When I eat I “EL” bow and when I realease I bow”EL”.
rELy spELl
levEL backwards as wELl
@ Saturnalia when the days are short of light noEL

It’s been a psy-op from the beginning. The weaving of worlds with words. Unravel your mind and be free. Find a simple place to be and share the truth while you can. Thanks, James.

The controllers of this place see our inaction as a green light to do what thou wilt. They’ve shown us time and time and time again the horrible shit they’ve been doing in our name with our tax dollars all these years, at home and abroad, and still not a peep from the American people. Most of whom are fast asleep. As long as we’ve got our screens and pizza . . . we’re good, apparently.