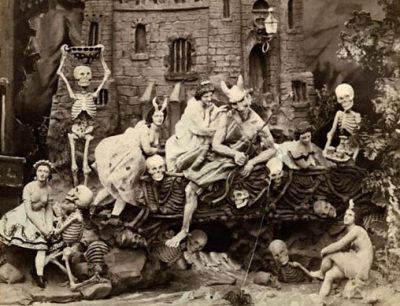 Evil is a moat flowing with bile. The bile’s not black it’s brown. Nor is it warm, it’s cold. Evil is congealed. It’s full of crusty teeth and the tangled hair of children. Evil’s drawbridge is lined with spent teddy bears left in the rain on the side of a road. Evil is not a reveling red demon. Evil is not a hot sauce. Evil is the opposite of passion. Evil is the cobweb we keep in the corner. Evil’s defensive moat is our false perception of how it looks. Evil is not a burning fire. When we say the word Satanism we picture a red man between the head and feet of a goat. But goats are God’s creatures. And man is God’s vessel. And red is the color of living blood. None of these are evil. Evil is an ignorant machine that gobbles tears. It’s an abandoned wood chipper running in the playground. It’s apathy measured by the degree. Evil is a chain of command.

It starts with mutilation.
The shame makes you itchy.
Injustice makes you agitated.
The drugs make you spin.
The music sets a rhythm.
The actors take your hand.
The self leaves the body.
The machine takes the wheel.
But it won’t.
Not when you love you.

Let’s define Satanism simply. It is the eviction of the person. It is the hollowing out of one’s spiritual core. Under this definition, Satanism includes psychopathy, sociopathy, and narcissism. It’s the soul that’s checked out on the train. Under this definition, we can see the satanic machine around us. Evil is no Brigadoon. It’s brick and mortar with roman numerals carved above the door. The Pentagon is satanic. DC is satanic. Hollywood is satanic. Courts are satanic. Corporations are satanic. Walking corpses rule our world. Satanism is sanctioned choreography. There’s nothing conscious about satanism. It’s the antithesis of consciousness. 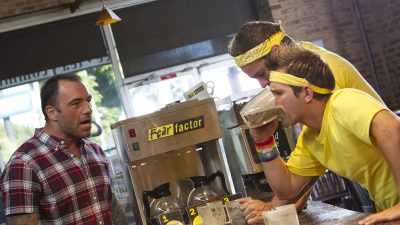 Joe Rogan’s show FearFactor was a televised welcome to the machine. He traded contestant’s dignity for financial reward. Joe injected satanism as a tool for liberation. He called the body’s repulsions a handicap. Joe kissed the taint of someone’s ass on a pleather casting couch to get there. The more recruits to join him, the less shuddering he will feel in his bones. Satanism is the lack of regret. Satanism is a pyramid scheme of self-effacement. Satanism tells everyone to, “just do it.” Satanism evacuates the spirit’s desire to live in a body. Evil pries the self out of its meaty can with the fame of television, the power of money, and the illusion of victory. The corpses watching at home laugh with Joe because they are less alone now. Satanism is the unhungry hyena gorging on a babies’ throat. Evil is the evacuation of Holy. It’s thoughtless piss watering an altar. It’s white virginity pressed in the mud by a dirty boot. Satanism is not the devil. It’s apathy running amok with diplomatic immunity. Satanism is the ease with which we turn our backs to God.

The moment we dehumanize evil you become larger than it could ever be. Hollywood needs you thinking evil is alive and breathing. It intimidates the lifeforce and puts you on your knees. Rise up. God has knighted you a living man. You are his burning hot sword forged in liquid red plasma.

James, I like listening to your videos and reading your articles. However, after being banned from YouTube for telling truth “they” considered to be hateful, I cannot listen to any YouTube videos over my Cell Phone which is what I am forced to do on many occasions. If I am in a quiet room with the volume on my cell phone turned up as high as it will go, I can hear you pretty well. However, because the volume on your end is so LOW, I can’t listen to you in my car which is where I really want to hear you. Please, if you can, turn YOUR VOLUME way up. Folks listening to you can always “lower” their volume if necessary. PLUS, if you can, please add all of your new videos to your Website too. Your YouTube channel has more videos than your web page. Thanks, and keep up the cool work.

Is this one better? https://youtu.be/iWZSCxE8iXs

James, this piece of writing is truly artistic. I kept thinking I was reading a modern day Ralph Waldo Emerson. You really are an excellent writer. EVIL IS THE EVACUATION OF HOLY…..Now, that pretty much sums it up. Definitions are SO important. When you say folks are “evacuated”, I now understand.

Satan is ordained by God… quit trying to scare people ..

Dang it James. I know this is off topic…but, seriously, you didn’t need to update Blueprint. I don’t want my digital copy updated. I’ll protect it at all cost 🙂 Eons ago I used to be a copy editor and there is no Feckin way to catch all the errors. Only idiots care abt typos or grammar. Love yr work. I’ll order a hard copy of your next book, dog hair n all.

Back on topic. I bring the subject of Evil up with a lot of people. Some see it. So not all keep their blinders on. The ones that do keep the blinders are protecting their reality with every ounce of their being. That has got to be exhausting.

Satanism is a child with a gun standing on a pile of shit screaming that he’s important over and over.

You always know what to say.

Joe R. is part of (((their))) plan to destroy humanity. Clown behavior. “Look over there! Yuk, yuk, y’all while your brain cells shrivel!”

There are female counterparts to Joe; and Joe was used to make men into “Soy Boys”.

Joe is like a 3rd cousin to Gerard Way of “My Chemical Romance”. Gerard is creator of “The Umbrella Academy” which is an odd story of women who aren’t pregnant one day, but the next day they give birth to super humans. Gerard is very talented, comes across as very genuine, but look at his lyrics. He admitted 4 years ago of having “gender issues”, but is married to a female and has a child. Thing is, I went to his concert in 2007, liked the band, but backed off when I saw Satanic lyrics. He’s a “likeable demon lover”. Humor laced with sin.

This is amazing James I so agree that the devil’s in the details Rogan is so popular and yet mainly promotes how stupid and ignorant people are. Like all the crap on TV at the moment. To me that is a big red flag when assessing a source. Às so often I go to the Aboriginal philosophy where everyone has a Spirit which is very powerful which is what “they” don’t want us to become aware of so put so much (of our) energy into keeping us from finding out. Thanks for all your work putting these concepts into words. Xxx