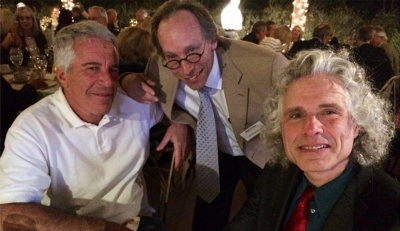 When I read anything technical from Epstein’s “science” ventures it reads like fluffy bullshit you’d feed to a capital investment group. It’s a challenge to take it seriously. I watch the big words slowly sink from a lack of concrete. Ask anyone in venture capital and they will tell you most of their job is propaganda. They won’t call it by that name though. They call it cutting-edge innovation to make it sound better.

It’s important to remember special relativity has been debunked by quantum mechanics for some time now. We even find things that travel faster than the speed of light. Still, society’s movers keep propping up meat puppets with a reverence for Albert Einstein. The superstars of science are no more talented than the superstars of Hollywood. Epstein, like Einstein, was an actor playing a part. He was not a billionaire investor pushing the limits of artificial intelligence and biology. He was a criminal committing international human trafficking, rape, blackmail, and fraud.

Scientism tells you the chance of you being born were 1:400 Trillion. This is propaganda. The chances of you being born were 1:1. Half the people who tell you about cosmology were on Epstein island. If they can’t discern morality, why are we trusting them with our galaxy? Elite academia is a fraud run by billion-dollar liars. We have much to unlearn. 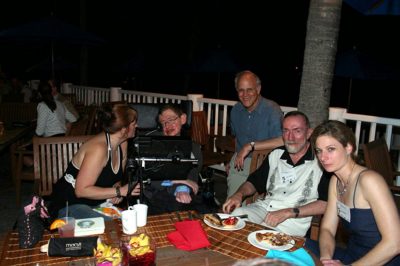 In 2002, I wanted $200k to develop a WordPress platform before WordPress had been invented. I had a working model of the program we had been developing for over a year. I knew its weaknesses and strong points. I was ready to take it to the next level. My mentor took me to Raleigh and got me an audience with a capital investment firm. We prepped for three months but never showed any code. Harry explained, “The code will only distract them.”

I listened to Harry. He was a successful developer with experience in tech. He was kind enough to open the curtain for me and show me how it worked. We didn’t ask for $200k. Harry said we needed to ask for $7 million. I thought he was joking but nope. I had to practice saying the words, “$7 million” in the mirror just so I could get it out with a straight face. We didn’t need that money for code. we needed it for the illusion.

Harry didn’t understand my code. No one in Raleigh would ever see what it could do. No one asked for the good stuff. No one wanted to come into the lab and have a look. My idea was reduced to a commodity. Whether it worked or not was moot. In this world, ideas are rated with clout based on who seems interested multiplied by their net worth. That was the only thermometer that mattered in venture capital.

Harry understood if we could get a big fish to sniff our crotch everyone would be hooked. A $200,000 idea was not as powerful as a $7 million idea. I can’t help but think this is exactly how Epstein worked. His billionaire persona was the only thing he needed to bring to any room. Any substance in his ventures would be a distraction. Study Epstein’s character and you see a list of people explain how he never read or immersed himself in work.

The novel Atlas Shrugged exposed this phenomenon of intellectual cannibalism. The copper god, Francisco d’Anconia, could move markets by snuffing someone at a party or lingering with someone else too long. Look at how our market dips get blamed on algorithmic reactions. Humans are even worse at this than machines. All Epstein studied every day were pre-pubescent girls and persuasion.

Harry and I didn’t get the money. The excuse they gave wasn’t even valid but I was denied an audience for my rebuttal. My facts would have only gotten in the way. On the drive back home, some girls in a VW van invited me to join them at a weekend contra-dance. I was driving alone in Harry’s BMW. Those girls treated me differently in his car. They trusted me without blinking. They never asked to see my lab. The attention were uncomfortably satisfying and creepy. I had fun dancing. Today, I drive a ’98 Honda Odyssey. It’s my cloak of invisibility. This world is made of smoke. People like Epstein are burning sulfur.

Epstein was not a brilliant scientist. He was a fraudster. Fraudsters spend all their time perfecting their art. Honest people forget the depravity in lying. It becomes fun for the inverted. It becomes a lifelong sport. To watch people believe your lie is to hold power over them. You know something they don’t. This is the energy of elitism and the magnetism of the secret society. 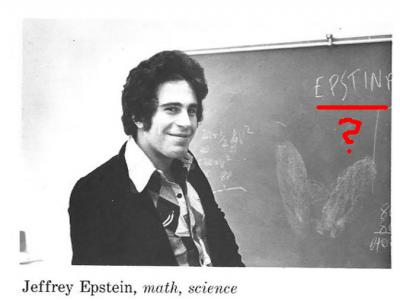 We forget how profitable it is to lie. We forget how rare it is to find integrity. John Galt was a character in Ayn Rand’s novel, Atlas Shrugged. Galt was the inventor who disappeared. He saw the system for what it was and left it behind so it could die on its own. Galt shrugged. He understood the rulers of the world were already doomed. Ayn Rand is one of the most shamed and dismissed authors in academia now. They call her elementary in an effort to reduce her. But elementary is when we learn every color. Rand knew the color of abandonment. Ayn exposed its intellectual cannibalism. She painted as it dripped its grease on the table. She believed in the power of man’s spine. She believed in the salty sweat collected under his nails.

People with spine smell Epstein instantly. The smell of money does nothing to mask the quaff of his taint. These are billion-dollar liars. Our government and corporations are full of them. Epstein was a complete fabrication tapping into the Einstein archetype and riding its coattails all over the world. Jeffrey Epstein isn’t a genius. He’s a shaped tool trained to drive a psychopathic machine.

Our world is full of amazing people and you are one of them. I don’t mind confessing to you my motives. The taller you stand the better I get to enjoy my sovereignty. Your psychic health benefits me tremendously. It benefits all of us. Let’s stop pretending the elite are smarter than we are. The elite are simply more willing to lie. That’s the difference between us and them.

“The quaff of his taint” – so epic. I love the word pictures – vivid!

Curious to hear your thoughts following today’s “suicide.” – Where there is a hope, there is a prayer that those elusive ‘white hats’ have abducted Epstein to keep him ‘safe.’ But there is the fact that with JE dead, the indictment dies too… as no one else was part of the indictment… a perfect moment for a Deep State erasure … Also, the 2000 pages were a little underwhelming in terms of their depth beyond the solo pervert pimp to power characterization of Epstein… and a band of expendable goofs… though the Bill Richardson – Epstein’s Zorro Ranch connection ‘sings’ with the fact that Zorro Ranch is an hour and a half from Los Alamos…. (George Webb follows the “atomic secrets” threads today). if Harvard, then of course Los Alamos…. Oh my…. Earth… the All Circus Channel… [BTW, I just discovered Mr. True this week and Have been trying to get friends to tune in as well… Much insight…. Thank you.]

It was those black hats that had to remove him. There are no white hats within the scams!

Willing to lie and a lot of other things too!

I disagree with you about Ayn Rand. She was an insider, just like H.G. Wells and 99.9% of other ‘writers’ who are propped up by the big publishers. Who knows who wrote their books. Most authorized “authors” are committees of people whether in ‘intelligence’ services or NGOs. Does anyone really believe that rags-to-riches baloney we were given about J.K. Rowling and her diarrhea at the keyboard? Nevertheless, your big picture conclusions tend to be accurate except for one, extremely important but missing element. Let us remember one thing if we remember only one thing; fish swim, birds fly, and yids lie. It’s what they do because their ‘god’ commands them to do so, especially when dealing with those outside of the clicque. It’s all about the blood, not really the Benjamins, baby.

I factually represented her novel. Hard to disagree with that.

We could say that all authors are insiders in a sense. That doesn’t negate the concept that Rand’s novels contain a unique perspective that is capable of getting people to stop watching the shadows on Plato’s cave for a few hours. Plus, sometimes a current author such as Mr. True uses allusions from literature to access the common human experience to make a point. That does not mean that he endorses the work cited as being the Absolute Truth.

Yeah. Which brings us back to “What is truth?”

You’re one of the amazing ones, too, James!

You show me the way all the time, Joe!

Wonderful. Inspired. Your pen, like a sword cutting through illusions, attracts likeminded folk. There are more of us than we think. Thank you James.

Impressive.
And now, look at another offshoot, “TerraMar” promoted by Ghislaine Maxwell. An global ocean project to basically pilage, pirate and rule the water. What happens on, in, water? Cables. Tunnels. Yachts. Freighters. Ports. Didn’t Q tell us “to watch the water”?

I read “Atlas Shrugged” for High School Literature Class in 1973. I loved it. I seriously doubt it’s still on any reading list anymore.

James. I need $700 million to spearheaded this campaign to bring it back in vogue to schools on a global level. PS I drive a 1987 Dodge Dart, will this hinder me?

James, thanks for the observation.