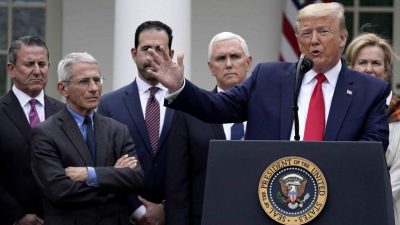 This virus we see painted before our eyes is the stimulus masquerading as a vaccine. Covid19 is just the adjuvant. In the world of vaccines, an adjuvant is any ingredient that induces shock into the immune system intentionally. Any President, any year, could say any virus is killing us and come up with the numbers to prove it. Remember when NASA fudged data to tell you sea-levels were rising in 2016? Remember when 18 intelligence agencies told you they found WMDs in Iraq? Or when the 9/11 commission found Building 7 was collapsed by fire and used Popular Mechanics to cover for it? How many more lies do people need in order to stop trusting them? Trump didn’t invent the Covid19 virus. He published it. He didn’t publish it to hurt you. He published it to give you a cure. Our children will not like this cure. You will, though. So will your neighbors. So will your boss. Trump is going to give you money to take his medicine.

What is happening to us now versus how this will be recorded are as different as night and day. If more people understood this, they could see through today’s lie. But they will only see through it if they want to. ‬And therein lies the problem: no one wants to see through it. Instead, John Hopkins is running a poll over how much information they should hide from you.

Just like on the right, the people on the left who hate Trump hate truthers even more. To them, Trump only threatens the score in the game. Truthers threaten the entire stadium. This makes everyone nervous. Fans like the game. They like to pretend there are no panthers in the jungle. They like to assume psychopaths would never penetrate the government. People inside this fantasy will come after you long before they’ll go after Trump. You’re way more dangerous to them than their orange, xenophobic Hitler-monster in the ring. They cling to this game and reject anyone who tries to show them it’s bogus.

Half of us are worried the state is coming for us. The other hold a fantasy it’ll make everything better. That’s what the New World Order likes to call “checkmate.”

All the CEOs stepping down have a big payout and remain on the board for a couple of years. This isn’t a secret underground punishment – it’s compensation for cooperation. All of the celebrities are endorsing the New World Order by claiming they have the virus. They gather free publicity and scoop up our sympathy wishes as compensation. The CEOs and the celebrities know the plan that the rest of us have been told to blindly trust. Even the IMF knows. They’ve had $1 trillion waiting for us in the wings. They’re the NWO’s bank, after all, so they can afford it. Their last kill shot was Venezuela. It’s a one-world government, now. There’s no such thing as a state bank. Gaddafi was the last of the Mohicans.

The good news is: the virus isn’t dangerous. The problem is: Trump already spent $8Billion for science to disagree. This MIT biologist will tell you the same, if you’d rather it come from someone with credentials. Credentials turn liars into fact technicians. Of course, money is its own credential, too. If they can shut down every business for a flu virus, we can have a national economic emergency to boot. The emergency lets Trump introduce his stimulus. The new stimulus will end the dollar, end version 1.0 of the Federal Reserve, and end the ability for your children to barter privately or have social outbursts – like I get to do in this article. When Trump wipes out student loan debt, don’t forget I’ve always said we would beg for the New World Order. Meanwhile, this guy won $100,000 in court for claiming measles isn’t a virus.

You’ll love the new gold-backed dollar they got cooking. It’s not backed by real gold but it is backed by the idea that it’s there. Hopefully, it will feature a man on the moon to go in the scrapbook for club 33. The new dollar: a centralized blockchain built off XRP (or Ripple). Jimmy Fallon will sing a cute song about it. Every dollar will be attached to your Social Security account. You can scan it with your phone and turn it digital. This will pave the way for universal income, disaster relief payments, and social crediting. All of the people who have written people like me off as crazy will be able to assign me as “problematic” from their cellphone. It will be anonymous, too, so they won’t have to be confronted or even feel bad. And all of this will come with a stimulus – $1000 cash. Even as I type, I’m like, “damn, that sounds cool.” This virus has been in the works since 1988. America is a regime of its former self. Ghengis Khan didn’t kill his enemies as much as he seduced them. That’s why he got so much tail.

“First, we shut down everything. Then we give them monopoly money. Then they’ll do anything we want to make it go back to normal.” – Hypothetically Steve Bannon

All of the people who ever called me a “conspiracy theorist” have been really quiet this week. Some of them have been sending me private messages asking me questions. If you’re new here, here’s a quick primer:

My warped sense of optimism comes out in weird ways, but if you’re worried about your life, take heart: no rancher wants to kill their own cattle. Especially not when they will fight any other animal that disagrees with their master. This kind of backstabbing loyalty takes thousands of years to breed. We’re worth far more alive than dead.

Some of you have been asking how to prepare.

My answer is: you’ll be fine. Find your center and make it contagious. If things get worse, I will be implementing Operation Wildlife Crossing and will form a quasi-militia to fix the right-of-way problem for critters. This means a lot of our roads will need to go so we can grow food and animals. We need fewer roads, not more. A single-horse-powered vehicle is so much cooler than a stupid Telsa.

“Everybody’s gotta get their shots. Some of you will be getting them in the head.” – Murica

Also, per an incomplete delivery (fetus and its membranes) or abortion and taking, a mind is a terrible thing to waste on implantation (plantation) or conception!!!

Just finished reading The Technology of Belief. “I” am sick that we are all guilty of consenting to this nonsense. We’ll definitely find out who the yellars are when they accept their helicopter money for another mind fucking ritual! That’s right! Let’s pay the salary for a guy to taze, kill or throw us in jail. Let’s all volunteer to go into a court room where the fishers of men can capture our minds to make us believe we’re actually in the district of Columbus per the doctrine of discovery or summary judgement based on an assumed arbitrary, religious real people name or Gregorian calendar beginning @ year one to 2020 birth date! Hey! What happened to zero (fertilization) to one?! Oh! That would be the unaccounted time for the womb man! A mind is a terrible thing, and I emphasize thing, to waste on an abortion or violent crime with consent and meeting of the minds impossible.

I also highly recommend your Blue Prints of Mind Control to those who are not intellectually lazy and have the courage to want to help stop these psycho prana bottom feeders!

Please continue your amazing writing journey on this subject matter and be safe! Never forget a baby is literally worth its weight in gold + the pound of flesh or birth day cake!!!!!

Thanks. Getting rid of my driveway to grow a food garden.

Excellent post. Ive always been mistrustful of trump. People thought i supported him just bc i was against hillary whose narratives i found obnoxious. This coronavirus loldemic is no doubt the new 911 to keep the masses on the police state plantation (a new shock is needed every 20 years or so to further the agenda and keep people in fear and obedient)

Thanks James for this at this time. Just bought your new book – looking forward to it as bit of sanity. So a major cause of illness is social isolation and that’s all my classes cancelled. Also the only way to gain immunity to disease is to be exposed to disease and people wouldn’t come back to my house for a coffee! The only species which can’t mix with each other – THAT will bring down the population. Are they hoarding all the toilet paper so they can charge us loads? Looked on that horrible insidious big company’s website as last resort and they are selling 10 rolls for 18.99GDP!!! Trying to keep ma heed but hysteria is catching. Trying to be the antidote when everyone seems to want a pandemic. Pushing aginst the tide. Love jay