Lyra was seven. It was lunchtime on a Friday and a sunny day for November 22nd. Her father was speaking to the manager in the service station’s office and Lyra had just met them in the doorway. She decided they would enjoy her interruption. She saw a gun reach out above her like a tree branch. A trigger was pulled and a bullet went straight through her father’s temple. Like a cow in a slaughterhouse, he fell instantly. The floor thumped where the leaking sack of organs had just landed. Her father was gone now. Lyra was frozen when she heard the next shot. She was still staring at the last place her father’s head had been. A clock on the wall remained in the vision showing it was exactly 12:30. She saw the black second hand snap a single notch past twelve as the second body hit the floor. This one did not creak when it landed. It slumped quietly on top of the first one. The entire thing was over in a breath. Everything turned into a sideways blur as her body bounced like luggage in the arms of her new protector.

That was seventeen years ago and Lyra is trembling in the warm sunlight. She’s an adult now but sometimes she can’t stop shaking. Her shoulder blades will vibrate like a bell that can’t be muffled. It’s happens mostly around lunchtime when it’s sunny or there’s a clock around. She realizes she can’t drive in this condition so she leaves the truck running and slides across the bench seat making herself a passenger. Lyra is waiting for Sam. He saved her life once when a stranger killed her father with a magic bullet. Sam is saving Lyra right now from the evil people in the bank. She tells people Sam is her uncle. When she explains how her father died they always look up to Sam like he’s a hero.

The glass doors of the bank kick open as Lyra’s uncle drags a man by his necktie out into the street. He takes the short-barreled shotgun off the man’s chest and points it back inside and fires a cluster of shrapnel. The glass doors burst like a pinata as tiny glass beads explode in every direction like candy. Sam’s mask is pushed up on his forehead now. He sees Lyra in the passenger seat and yells for her to open his door. She has already opened it when she hears the next burst. The stranger in the necktie is now a tendered carcass on the blacktop. Her uncle throws a large duffle into the truck bed, puts the transmission in gear, and drives over the bleeding speed bump. Lyra sees a person in her door mirror she used to remember. She has lost the power of reflection.

That was yesterday and Lyra stopped counting bodies a long time ago. This is her life now. She’s sequestered in an empty barn surrounded by a field of abandoned weeds as high as her elbows. She is waiting for it to get dark while she digs a crescent of oatmeal out of the bottom of a coffee cup. Sam is spread out snoring comfortably on the bench seat with the doors open. She is in her twenties now and addicted to trauma. She would be dead if she weren’t.

After sunset, Lyra left the seclusion of the barn and crossed the field towards the creek. She was spreading herself a path through the grass like a curtain. She washed her armpits and thought about the man in the necktie. Sam said he was going to kill both of them. For the first time ever, she wonders if that were true. She reminds herself that Sam isn’t really her uncle. Yesterday was the first time she saw him kill someone with his mask off.

What could you say to Lyra right now to awaken her? Could you say anything at all? Could you approach her as a stranger and have a rational conversation about what really happened to her dad? Would she trust you if you told her Sam was the one who did it? At what point do we call Lyra an accomplice? Is she supporting her Uncle? She has the ability to reflect, but does she? Can she? At what point is it not okay for her to go along with the trauma program? All we have is a clock on the wall that tells us what time it is. We see another anniversary come around and we tense up until it passes. We can do more now. 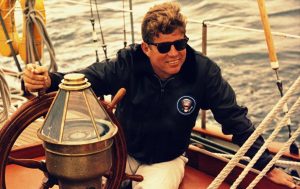 JFK and 9/11 were satanic ritual murders. Our country is a zombie in the trance of those traumas. We are a nation of trauma survivors. Our elected congress walks in public darkness about what happened. They dangle toys like racism and tennis shoes to distract us. For fifty-five years our politicians and media have pretend it was “a magic bullet.” They have pretended it was “a dozen box cutters.” They have pretended an office fire pulls a building. They pretended WMDs were the motivation for invasion. We are all addicted to the lies of trauma. It opens doors for them and makes us passive obedient and comfortable. It drives us into an abandoned barn to hide out until sundown. Who does a child of trauma serve but the person she thinks will protect her?

The moment you awaken to the truth of America, your entire world shatters. Everything around you becomes tainted in blood and murder. It gets harder, and it feels darker. We live in a psychopathic propaganda-driven playground where they lie to us for sport. Evil is sleeping on a leather bench seat while we dig for oatmeal. We are a trembling seven year old locked inside a fifty-five year long nightmare. Even our salvation is tainted when we understand our own complicity. Imagine the distance required to slide us out of the passenger seat and back behind the wheel as the driver. This can only happen with the strength of reflection. Man’s most powerful weapon is compassion. This compassion is a crucible of power; the very source of love’s gravity. Truth is a flaming sword called Excalibur. Wherever we point it, darkness sizzles. To awaken is to pull this sword from the stone. We are making truth king again. We are reclaiming this land in the spirit of truth as intended. 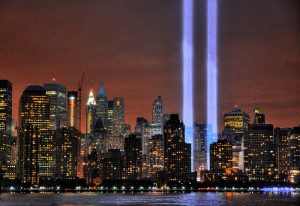 The second tower is 9/11. Raise the memory of 2,996 people in both buildings. See the lie of the impossible phone calls, a dozen box cutters disabling the world’s most powerful air-defense system. See the lie of a plastic razor holder taking out four commercial airplanes, three buildings and the pentagon. See the twenty-one trillion dollars missing. See a Bush son nodding in approval. See the group of Israelis celebrating the documentary. See four more world banks falling. See three more countries change hands. See a splintered nation walking in trauma trying to find its own reflection. This is the south tower. Tower 2, the second trauma.

America is trying to remember. Pull Excalibur from your stone and point it straight into the darkness. Awareness is a flaming sword of truth. Give it your passionate fire as a beacon. Those still under the satanic spell will find our light and stop shaking long enough to remember. Let your reflection be a sacred lake. Take up this holy sword and wield it. We have to wake up now. Every one of us. It’s time to wake up.

It is time to stand up against these evil people. Stand up America

That was a intense read, I read it twice. Can’t believe how blind I have been with the distractions of my onw life all these years!

I feel the same, Rob.