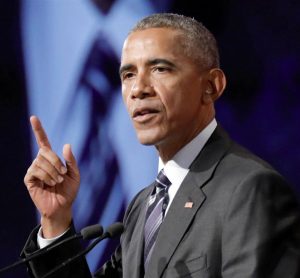 I read another article today about the blinding genius of Barack Obama. In a video of his speech, I watched him stretch oratory pauses out like they were chewing gum while he wagged a finger preaching. He sounded fantastic as a tenor. He performed to a crowd of atheists that had come to hear his voice. Barack Obama is a cardinal of Relativism. His audience is a congregation of atheists. He has a blinding genius because it requires faith to believe something so outlandish.

I am reminded of his speech in South Africa where he scolded Americans for racism while a few hundred kilometers away they were burning white farmlands shouting, “Kill the white boer.” This is a country that has seen a 7% rise in murder since this time last year. His blind genius about racism was so vivid he had no words to say about it. I remember how blind his genius was against child trafficking or pedophilia during his administration. Think of how he could have unified both parties with this issue. I remember his genius at gutting our fossil fuel industry and giving everyone cash to scrap their working automobiles in the name of the environment. I remember how stunningly blind he was to his own Secretary of State, his own party and Bernie Sanders.  How blind he was to the business owner when he said, “If you’ve got a business – you didn’t build that.” Yet still, even today, he is a liberal messiah draped in a pompous petticoat of sublime admiration. That’s why I maintain Barack Obama is not a politician; he is a religion. This is a religion of relativism and you see it in the phenomenon of scientism.

Relativism is the belief in the holiness and sanctity of pure reason. The belief that one may cleanse their mind of all things spiritual and distill truth from its own urine. But every atheist forgets that faith is an involuntary muscle. And when lungs expel, they use faith to form a vacuum to fill itself back up again. Every breath is a living faith in resurrection. Faith is not a tool as much as a gear in a transmission. Faith is the thought before the word. But relativism has excommunicated faith from the lab and the classroom. Relativism calls an entire side of the brain “problematic.” It sterilizes the intangible intuition in a stainless steel bowl of acid. Relativism has turned a nation into an American Idol contest of identitarianism because there’s nothing left to worship but our own narcissism. Barack Obama was that American Idol and the first recipient of a Nobel Prize in Identity.

The philosophy of relativism would psychologically fit under a fetish. Every fetish has a component of shame that acts as a kind of battery. For example, if you enjoy spanking yourself in public for being a racist, you aren’t really discouraging the act of racism, you are fueling it. Consider how they call anti-hate love under relativism. You have simply created a disguise so you can masturbate in public for virtue. This kind of fetish would be impossible without the self-abandonment of relativism. The self-abandoned feel shame, which is collected and given as fame to the anointed ones. Barack Obama is a snake oil, not a person. He is the bottled product of democratic dopamine in a tincture. He is a Manchurian shame vessel gathering reverence in exchange for absolution. He is the good feelings after a confession. This is liberal narcissism and is the cancer of politics. Barack Obama is their golden child on a pedestal. He could never see Rome burn because the flames are the wrong color.

Dude the way you use words is amazing. You have a real talent for grabbing ppls attention and using descriptive words that transport you into whatever you’re writing about. So many try to write, even me, but when someone like you comes along it’s very clear that THIS is what great writing is. It’s filled with passion and vulnerability and a lot of intelligence. I’m blown away by your words sometimes man. I wish I could write like that. Keep on keeping on, soldier!!