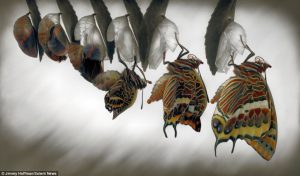 This is officially me spilling the beans. If I knew then what I know now, I might still be with her. I might have tried another tactic after the last three hundred failed so miserably. I learned last week that I was married to an alter. Her mother was a twin in Nazi Germany. She was a child through the war and programmed by a family through wartime. I don’t know the exact details of the trauma’s origin. Their family line was traced back to the Black Forest when pagans walked naked in daylight. When I met her mother she did not say, “Hello, I am an alter.” I am as thick as I am clueless when I love someone. I decided long ago my wife must have been sociopathic. Now I have returned to the dusty chalkboard to erase that diagnosis. I scribe the word, “ALTER” under the white chalk finishing line of her equation. I will have to rethink everything now about her. About both of them. My work is etched on both sides of a worked chalkboard on a swinging easel on the middle of a lit stage. The audience chamber around me is as black as my flat depression. There is no curtain or backstage. I stand where I used to, on a platform floating in flat white-noise like a scratchy wool blanket on the cheek. I remember screaming up into the darkness. I was calling her name like a whalesong through the crushing water. I can barely handle being back in this place again. I spent three years locked inside an unsolved puzzle – I wanted my wife back. But there were two of her and I was only loved by one of them. Now I know why I made her six dragons. I was courting her darkside.

Readers ask me sometimes how I know so much about alters. I dismiss this question as a nice compliment. But last week, a missing piece was discovered. My body began to unravel. I fasted for a few days as I traveled. My body grew slow as a turtle and my mind joined its creepy pace. I was vibrating to a story that was slowly unfolding. I thought maybe I was having a health issue and took my blood pressure several times and audited my diet. But truth comes to us as a swift pain. This pain was like a childbirth as my body transformed itself into an intensive involuntary labor. There is no pretending you sit behind the steering wheel once it starts. You are strapped to the front of the hood like an ornament. The identity of you is voided as you become action. My body dissolved itself like a cocooned caterpillar. The truth was sprouting from my back like giant black wings. It ripped me open from my soft paper basket. It took me down through the bamboo reeds of a river. I see truth as clear as a monarch blinking from its branch. Now that I am years away, I scratch the answer in the silt bottom of a river with my toe. I am away from that reptile. I am outside and safe and whole again. But I was married to an alter.

Right now I feel guilt for not trying hard enough. As her husband I want her to have the meat from my long hunt. I have finally gutted the answer. Its tender clean ribs are ready for the freezer. Its shiny ten-point carcass was my trophy after half a decade of hunting. I still have its puncture wounds in my belly. It tenderized me with its pushes for violence. I remember the night of bear mace followed by her telling me how cute my eyes were swollen. I was her little red raccoon. I remember her pulling me inside her vulva on a picnic table after a punch in the face. I remember two hand-claws gouging at my scrotum minutes after a sweet giggle. I remember the shame of constantly staying. The shackles of loyalty turned foolish. I remember the mind fuck of sweet honey afterwards. I was spun in the torture of reverberating horror from a medieval village. But finally on my shoulders I carry home the warm body of an answer. If I could approach her house again I would lay it on her table. I have no desire to see her face or take my credit. I simply want to be a man who brought home the bacon.

If you see her don’t say hello. Ask her if she knows about her twin. Ask her if she knows about the dragon. Tell her I know him well. Tell her she should consider this dark passenger. Tell her I remember the days I licked its fire. Tell her I know her mother did this to her. Tell her I know her mother was a victim of another. I know what they are now. I understand this wasn’t personal. A mantis always prays before it feeds. I see the fork in her heart jabbed centuries ago still bleeding. I see the hot bile spill from one side. I see the warm sweet honey erupt from the other. It was selfish of me to marry the honey without holding the acid. I remember the torture that came from a single costume. Two bodies in one sweater. I insisted she knew what she was doing to me. Like Superman and Clark Kent pretending. But none of them were pretending. Her sister gave us a refrigerator magnet that said, “Two peas in a pod.” Now I know those two peas were her and him. I tried to stay, but he would not let me. I tried to tell her, but she refused to believe. I blamed her for him. I begged him for her. I was trapped inside the training of the alter. I am still a recovering student.

I am trapped in your triangle. My kind words bounce off your elegant skin. Affections dissolve over the boiling heat from your furnace. You are dangerous and I am cobblestone. Dig in your heels if that’s all I get. I have been locked inside this craving for your touch. Your touch is something. And something is so much less now than it used to be.

I tried to draw your mad squiggly line. Now I walk it like a tightrope stretched between loyal and foolish. I made you six dragons because I missed those steep fangs. I missed the silky arson of your lips. I lay lamenting the times they tasted like candy. Back when you believed in me.

So many sunsets, just me and your voicemail. You are my charming dragon. Your grace is reptilian. Your teeth are perfect. Your eyes are deadly. Cast me a spell from your glittering tongue. You will always be so very pretty.

I remember the way she ate chocolate. She was meticulous, poised, and non-indulgent. I remember how straight her back was when I sat her at the dinner table. I remember how soft she made her footsteps. I remember how she nibbled on peppered green beans. I know now why her face was so dedicated when she pruned in a mirror. I see her now more completely than I have ever seen her before. She gave all of her attention to detail. She became enraged when I exposed my feelings. She programmed me automatically like eight legs from a sewing spider. She could not understand why I kept complaining. This had been her life since she was born. She was offended at my self protection. The pain of it all made me too selfish to see. I failed my darling bride and partner. I failed her and that dragon. It took me three years to see that she was an alter. I am a very slow person to realize things this close to me. Now I know, my brain will heal. It’s been stuck in a loop, trying to process someone kind not knowing they were doing something evil. I never considered the possibility that it could be both.

You capture all of this with such beauty even in the devastation.

I have seen this before. A child traumatized raised me and hence I was abused by 2 fathers. She showed me how to marry abuse and cover it all up in daylight. But my story is not why I comment. I know you are telling the truth. I also believe that you can break the chains of curses 10 generations back on both sides with the blood of Jesus Christ. I have experienced unexplainable things while running from my dragon and my husband’s dragon. I took an unthinkable route and God led me directly to safety. I came here to… Read more »

Can’t believe I missed this back in October. NOW I know why I recognized you! We have both been married to dragons. I was also mentored by another dragon, who spent much effort trying to destroy me when I ultimately refused to make the transition. Wow. I know exactly why you had trouble giving a dragon up. I was about two months from being dead when I did…

Stumbled upon your website and have been reading for hours. The level of emotion you are able to express thru writing is beautiful. Poetry.

You didn’t fail her. There was never anything you could have done other than love her, which it sounds like you did.

Mirror neurons = be the change, set an example. That is all we can ever do in this world while still maintaining our integrity, ie, respecting each other’s sovereignty.

Wishing you a speedy recovery.

so good … reminds me of a reversal of my ex-husband and I … and I wonder each time I become increasingly aware of how I am someone who FEELS so much that I am able to FEEL NOTHING all the while KNOWING deep inside and out that NOTHING is me – whether the low self esteem of a sensitive child feeling unworthy feeling like nothing, purposeless – yet I can w/ a choice, a focus on new perspectives, learning, understanding of the cellular memories I carry – nothing becomes all the infinate possibilities of life – nothing is the… Read more »