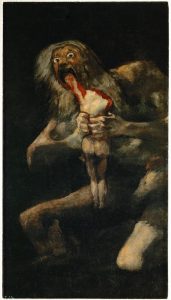 Inside the stone castle there was a large dining hall. In the center sat a large square black onyx cube. A round table of ash wood was constructed around it. On this cube, inside this ring, a man named Saturn would eat one of his children. But he would not rip his child’s head off like in the painting. Saturn merely licked his own fingers from a job well done. He would chop his son up into bite-sized pieces in front of his family with a cleaver. Saturn gave no warning as all of his children sat for dinner. Saturn called his precious son Tiamat over as his voice demanded the room. Young Tiamat obeyed as he approached his father’s throne. Saturn cupped his son’s neck like a fresh sapling tree and proclaimed, “My sweet and fresh, Tiamat, I have prepared your destiny. Tonight you will feed your brothers and sisters. You will prepare us a meal so memorable, my name will live forever.” Tiamat gulped at the honor as he cocked his head and asked innocently, “Father, what shall I prepare us that could be so memorable?” Saturn pulled his son’s face into his. He gazed into the soft pores of his sweet boy’s skin as if to see the blood rush. He quietly shoved a three-pronged fork deep into his gut. He captured every last photon bouncing off the cornea as Tiamat fell into the abyss of his father’s madness. Saturn ripped his instrument to the left and then the right. He ejected his trident as fast as it entered. Tiamat’s shock agreed with the ceremony as his intestines spilled from his belly like a scooped pumpkin. Saturn pulled his son’s carcass onto the top of the cube for everyone to witness. Tiamat was gargling spent blood and his arms and feet were still convulsing. Saturn pinned his supple neck to the table like a fresh goose and chopped his child to bits with the cleaver. The butcher gave all of his children an ultimatum, “Eat, or perish.”

Saturn was the first cannibal – the first satanist. He wanted his memory to outlive the sun. He would place himself as the dark ruler. He sacrificed every one of his sons to the trauma. There was only one survivor that first supper. Tiamat was the only one spared. All of the children ate from his pulverized body as his chunks were dumped into a stew.  Saturn watched each child drink the bloody broth from their plates like animals. Every piece of bone – every chewy string of tendon was swallowed. As they finished, Saturn demand they lick their own fingers. When satisfied he commanded each of them into an spinning orbit around the table. Each child began their march to the sound of a virgin trauma. It was the first Hajj.

Every year, 2.5 million pilgrims ascend on Mecca. Every year they circle the cube seven times – once for each child. Their psychic energy and focus spins the black sun. The cube is a prison of trauma. There are no longer seven children. There are six caught in the dimensional prison of cannibalism. One side for each child; the eternal spell of Saturn. We were trapped inside that box. We mutilate our children even today through the subconscious practice of circumcision. Half the world mutilates the girl while the other half mutilates the boy. Each side demanding the other one is the real savage. We hide our trauma cycles now behind words like health care or sanitation. Abortion is psychological trauma. It’s not reproduction – it is a form of self-mutilation. If you don’t think a life is growing inside you, at least admit it is a part of your body and that you demand the right to mutilate yourself. Calling it anything else is manipulation. We are still blinded by a first trauma. We still do this in remembrance of him. What would happen to our world if we all stopped spinning around the black table?

Saturn was the first elite. The first to decide his name was more important than his blood. A name is a psychic tombstone and he has been immortalized in the black stone. A hexagon mounts a maelstrom on a planet. It’s spins the giant like a giant dreidel in its trap. The storm is slowly shrinking. We are no longer too terrified to stop. We know now what we do. There is no guilt. There is only the vibration of trauma. We crucify ourselves for being hollow. We retreat underneath the flat crevice of our own feet. That time is over now. Someone is whistling. We all agreed to a new era. A new gear has engaged the transmission. We are bodies again – not heads in jars. May our children spin around themselves slower than we did; if that’s all we can do then we must. The meaning of fire and ice is the alchemy of proportion. Love is perfectly warm. It neither burns nor pierces. It wraps itself around what choses to be still. The spinning of trauma stops love’s absorption. We are told to keep spinning and spinning around the table. Each of us with our eyes closed as we eat each other at a black altar. This is not our fault. This was our destiny. We have come to emerge from a tub of burnt black oil. Our skin will shine like golden barley in the sun again. We are seeds who asked to be buried long ago.

And … the rings of Saturn (the Lord of the Rings) were specifically engineered to influence the seven synthetic light implants we call “chakras”.

Ugh, I dunno about this one. Yes, Saturn story nicely done, but is that also really Mecca? And, jew circumcision is the anti-thesis of killing a child — read the text, this happens instead of that. Whole point was to call out Molech, really the Canaanite idol worship calling for the kid sacrifice. If you ask me why “the genital mutilation” of the jew, I’d say that it is the most insane thing you could ask a father to do to his son — the very most insane, wild thing, you could ask, if you have a kid, you know — so the point is, for a tribe in the desert, if we are all in this together (WWG1WGA) show that you can ascend from the physical anguish and insanity of this, and just do it. If you really believe, it’s easy; if you don’t want to be in the club, you can leave now. Initiation rite. (also, typo, line 6, form/from.)

Thanks for the typo fix. Sorry you felt “Ugh.” But I am thankful you shared why. We mutilate our children now under the guise of “sanitation.” THis comes with a sinister belief we are dirty. What happens to the mind when a mother rewards a child’s mutilation with love and milk? What does that do to the mind? Thanks for reading!

God told Abraham to kill his Son Isaac. Stopped him at the last minute.

i feel like you should know there’s another meaning to the word ‘hollow’ :
in this one, almost no one is hollowed, it’s having no light (circling) in the thought process. cumulative suffering causes that through a biological mechanism.
being empty of light, in a way, is a form of emptiness. but people aren’t empty of their false pre-conceptions, and i think what you named programming thrives on that. ignorance from the chaos.

When we become hollow we welcome the machine. Like bamboo with it’s nodes cut open. We become resonators, not water carriers.

not letting anything at all in, is what i meant. one of the meanings of hollow is ‘void’

being anti false reality, or seeking reality, in concept is the same thing.
no one can say what reality absolutely is, but they can say what it absolutely isn’t.
lies require (any kind of) acceptance. at a moment of confusion, a lie could filter through. lies support other lies. truths support other truths. light is something of intensity, in other words not “dim”. intensity tends to confuse, and be seen more than the “dim”, which is of a more negative(black) nature. the inability to recognize threats is a result of this. the more they wanted an answer, an end to the consuming paradox, the more likely that they were okay with an error. if reality is taken as non-dual, answers lose their potency, so questions receive a more appropriate answer.

Great read! As above so below, as “they” say, wouldn’t you agree when you watch humans eat meat? Mimicking the over lords- they hold space for cannibalism. Graduating with a square on their heads they willingly commemorate the sacrifice to the cannibal cause. In their Golden Age with their Golden Ox, they slaughter the future’s future with Feast from the past.

My readers are brilliant. This is so powerful I will probably steal it, “In their Golden Age with their Golden Ox, they slaughter the future’s future with Feast from the past.”