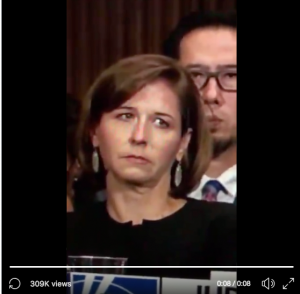 The difference between telepathy and empathy is nothing. We are hairy sweaty dolphins with kneecaps navigating the world with emotional sonar. Dolphins experience sound as a mandala. Our face is the sound of our feelings. Nothing lights the brain up more in an MRI than facial recognition. Nothing burns more calories than our thoughts. We are human empathy computers that have been hacked by a lying elite. Psychopaths have disseminated a million floating bottles with false messages. Each wash up on our shore and tear at our heartstrings. We are lost knowing which one to believe. We attack each other on the beach from the smoke of this emotional terrorism. That is until you see the face of Mrs Kavanaugh. Everybody drops their bottle and sees her face so very clearly. If you want to see how Congress honors women, watch Ashley Kavanaugh sit helplessly through her husband’s statement.

There is a credibility in silence. Mrs Kavanaugh has it and she never held a microphone. You could watch her face with the sound turned off and still hear every word as it was spoken. Dr. Ford was armed with a microphone and a cup of coffee. She was prepared by experts to be both cerebral and collegiate. But we are empaths and our words are silly decorations. Dr. Ford felt justified lying about Kavanaugh because Dr. Ford never had justice. She morphed back into a girl asking for help with her microphone. That girl is the real victim. A ten-year-old trauma victim still living in an unjust world. She owes no one any special treatment. Especially not someone who represents the very thing that failed her. There is no greater symbol of justice than the Supreme Court. But Dr. Ford does not know justice. She is still frozen in her own regression. Her entire history makes her a corrupted witness.

Why would Dr Ford give justice to Kavanaugh? She regards him as one of the guys that made it. It causes an acid to form in her wound. She feels completely justified making his world feel like hers. This is the essence of the equality movement. It’s okay as long as we suffer together. Her testimony is credible because she recalls her own trauma. A drunk man took her when she was too young to stop him. This is the meaning of “forced from behind.” She wasn’t surprised by his stealth – she was surprised by the violation. Her trust was raped at the top of the staircase as she was thrown into the bedroom. Ford said she couldn’t tell if it was Kavanaugh because it wasn’t Kavanaugh. 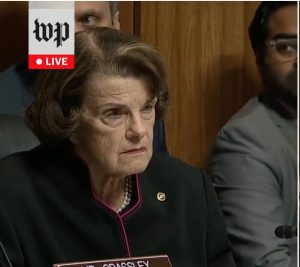 Anger is the natural reaction to injustice. Both parties are credible. Dr Ford was sexually assaulted a long ago and Kavanaugh wasn’t her perpetrator. The assailant in all of this is Dianne Feinstein, a democratic Senator from California. She took Dr. Ford as her victim and forced her up the steps of the capital. She told a ten year old Ford to say it was all “cerebral” and “collegiate.” But trauma is a somatic experience and justice was robbed yet again by a committee of politicians. I was falsely accused a few years ago and walked through this same gauntlet. I have seen firsthand how trauma justifies victims to act in ways where no one has justice. Ford thinks if she can’t have justice, why should Kavanaugh. Trauma is a dripping acid and our government failed both of them just like they always have.

Feinstein repeated Dr Ford’s trauma by raping her trust on camera. Feinstein was completely sober when she did it. She planned it for weeks. She turned Ford’s real story into a lie and reduced it to a spectacle. She forced a political story into her head and demanded it look cerebral. Ford trusted the wrong person again. We are surrounded by these sharks. Sharks will never be sorry. We are lucky if they kill us quickly. The worst thing that could happen is for them to gently bleed us from our bellies in the water. Dr Ford was raped by a predator swimming in alcohol. Her trauma is a reverberating regression. It is the opposite of time travel. Pain makes us selfish because it has to. The worst thing we can do is call Dr. Ford a liar. She is a survivor who still hasn’t been rescued. Kavanaugh’s daughter, age ten said, “let’s pray for her.” Let that girl be our representative. We are empathic creatures swimming in a shark tank of Senators. Ford will never know justice now. She has been given dopamine instead. Her truth is a lifetime away because of it.

Blind empathy is an insult. Discerned empathy is true compassion. Until we learn this, false accusations will continue.

Our government failed us again in that hearing. Our representatives are killing us one-by-one for their own sport. It is trauma to force us to watch it. They are filling the beach with more-and-more bottles and we are giving them money to keep doing it to us. I know how we can get rid of these sharks. We don’t even need a bigger boat. We have everything we need right in front of us. We must decentralize and disempower those who treat women like this. We have to stop pretending government is doing the best it can. Dianne Feinstein is not failing our country by accident. She is here to gut you like she did Dr. Ford. She will only keep throwing more bottles. We need to stop reading her. We need to turn and meet ourselves face-to-face. We need to go back to using our empathy. This can never happen with a partisan statement on camera. Everything the shark says is a lie. Every single word.

Ford IS Kavanaugh. Kavanaugh is Ford. Finkle is Einhorn…

We’re kept so busy talking about Kavanaugh and Ford that we lose focus on the true psychopaths orchestrating it all.

While I have serious doubts about Dr Ford’s story as told to the Senate Judiciary Committee this past Thursday I can honestly say she was used as a pawn by the Democrats. From Senator Diane Feinstein to her lawyers, Debra Katz and Micheal Bromwich, the had to have her behave like the proverbial horse led to water.

When it comes down to her credibility there are two things that stand out. First of all is her supposed fear of flying due to chlostrophobia brought on by the incident which turned out to be a lie. Secondly is the fact that she said she was never told that Senator Chuck Grassley offered to have investigators fly out to California to interview her.

With regards to the fear of flying she admitted to flying all over the world for different vacations. With regard to being interviewed in California her lawyers did her a big disservice if they didn’t apprise her of the offer. To me this is where she lost all credibility sorry to say.

For me it was suggesting she stored her trauma in the hippocampus.