Yesterday, I attacked a man on Twitter. I dehumanized a human by declaring him a psychopath. I even declared myself an expert on his character all from a fifty-minute video. His name is Daniel Lee and he was speaking against pedophilia. He even has a Patreon page with fourteen patrons paying him $95 a month. He was dressed as a noble crusader yet I was convinced he was a psychopath. As I watched the interview my body just lost it. Viscerally, my body became activated as words poured out of his face. His eyes looked kind and his ginger beard and derby hat gave him a Fozzie Bear persona. But as I listened, my body kept insisting he was a dangerous liar. I sat on this feeling for several hours and wondered if I was jealous. I scanned my entire mind for a reason I could be so thoroughly judgmental. I was stuck with my ugly opinion and it was about to ruin the party. So I did what any rational person would do. I called him a sociopathic liar on Twitter. I received a variety of feedback. I lost about a half-dozen followers in less than four minutes. It’s gave me a lot to think about and I have considered all of the arguments from those who supported him and from those who didn’t. Still, my body remained convinced Daniel was a psychopath. For the first time, I found myself listening to it.

My body was activated by his language and expressions. His eye movements looked splintered and I felt it in my intestine. I did not give him a somatic proof. I simply began with my first mental red flag. Daniel claimed to have an anonymous vetted source with seventeen terabytes of child porn evidence on his computer. He claims his source contacted Daniel because he thought he could trust him with the information. Daniel said the man was in danger and needed someone to leak it for him. Daniel agreed to put his own life on the line and be the whistle. I did not tell the truth in my accusation. I should have said, “Daniel, I believe you are a psychopath because my body told me.”

Daniel answered me on Twitter with a disarming and sweet demeanor. He told me how it was simply a misunderstanding as people gathered around to support him. They rubbed his back in gently circles as Daniel explained he was only here for the children. My body stopped talking. It shrank into a shrivel like a beached jellyfish. I cowered under myself and just tried to keep the conversation going. We were talking on the surface about the evidence but I was deep inside listening to my body. I told him his only priority should be to deliver the evidence to a prosecutor as soon as possible. I explained how important it was to act immediately. Daniel was instead planning to unfold it in a video series on his YouTube channel. I demanded he drop it on the table. I explained the dangers of hiding this information and encouraged him to contact Liz Crokin. That’s when he blocked me after saying I was “wicked” and “stupid.”

The truth is dropped and lies are always dangled.

Daniel displays an intimate relationship with the Bible. He was declaring the glory of Yahweh as his personal compass. He even explained how he would be willing to explain more later. He declared patience as the highest virtue. I shrank in my shame even more in doubt. Kind women were backing him with encouragement. My cowboy hat cast a tall black shadow across the thread. All I had to stand on was my little spine curled into a doughy limp croissant. The first time in forever a shrimp pulled the emergency cord on the belief bus. The driver looked back at the pipsqueak through the rear view mirror. A tiny arrogance was insisting he stop this noble journey and ruin all the momentum. But that little crescent biscuit rose to the occasion. He did not flake as truth turned him crisp and golden. He insisted to my mind and my heart that he was right. That little biscuit was my gut fresh out of the oven.

Man is a trinity of decision. We are the combination of head, heart and digestion. Sometimes truth is a brussel sprout. My lips always pucker at their presence. But truth rarely tastes like caramel and sugar. And taste is but a single dimension; an instrument of the head. We don’t know truth until it meets our digestion. How does one feel after candy? How does one feel after vegetables? The truth of Brussel sprouts are discerned through the intestines. It takes time. Flavor is immediate. Digestion is a process. It can take hours to render a decision.

Of course our heart is the final critic. He sits at the table for hours and ponders. The mad chef peeks through the porthole of a swinging door to the kitchen. It used to flap waiters back-and-forth like a game of pinball but the service had been halted. The chef has stopped the pinball and his eyes demanded a verdict. The fickle heart sitting alone still won’t answer. He ponders over his empty plate for hours. He is experiencing the room with a fresh meal in his belly. He is lingering in the afterglow of its side effect. Like a puff on a cigar from a big leather sofa. The critic was staking his own after-dinner inclinations. He wanted to know if they wandered to the young couple in the corner – with his hand on her stocking and her eyes on his shoulders. Or did the eyes find a baby in a high chair, gurgling for no reason. His giant saucer eyes of milk lapped up by the universe like the spiked tongue of a kitten. The heart feels the meal like a muse dancing. He wants to know how the courses affected his destiny. 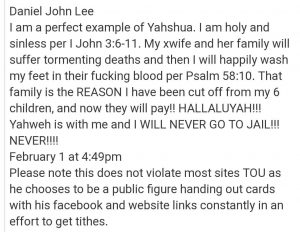 As it turned out, Daniel is quite a naughty character. He has a criminal record in Oregon but he keeps himself in Alaska. He seems to use religion as a shepherd’s crook for women. He’s in his thirties and been married six times. He is willing to buy any woman a plane ticket in exchange for her obedience. The information of pedophilia he was pushing seems to be attributed to another investigator. That investigator has told me it deals with government corruption and doesn’t directly touch children. But this is not an article about Daniel Lee. It’s an article about listening to the body. Don’t be afraid to listen to your whimpering cartilage curled into a question. Psychopaths like Daniel hijack our empathy with fish hooks and invisible string. Our egos are shamed from birth and the intuition has been labeled an angry werewolf to be hunted with torches.

Legal. I maintain Daniel Lee made himself a public figure with his website, YouTube presence, and active paid Patreon campaign. I am condemning him publicly here for lying to his audience. I will conduct all arguments about this on Twitter and promise to keep them public for prosperity. I am putting my reputation on the line as directly opposed to his. Everyone, including myself, should hold me accountable for this decision. I am willing to lose your faith, followers and my reputation if I am mistaken. I, James True, believe what my body told me. My body said Daniel Lee is a Psychopath.

Thanks for the heads up. Find something ‘not quite right’ from the first I stumbled on him.

I will forever hear “Moving right along” each time I see his face.

This guy is using his religion and rituals to suck people in! To make himself look holier than thou, truly believes he is holier than thou, just listen to videos from this week alone!! He absolutely hates Christians! He believes unless we talk, act, worship like him (a big no thank you) then we are all sinners, GOD HATES US, & we are going to burn in hell! I CALL THAT A CULT LEADER! Now he is going around the country, under the pretense of a Q conference, trying to connect people for home church groups, pretty much like a cult leader would!

You take yourself too seriously. You can’t “dehumanize” anyone. You can only express an opinion. So what if you called someone a “psychopath.” Guess what. Psychopaths are human beings too. So even if he were a psychopath, he would still be human.

I’ve been open to listen to Daniel but too many red flags. I really think he is being exposed, Billy/Franklin Graham being pedofiles with no real concrete evidence. Now Cornerstone incident, yet not seeing his part. Seems very bitter disquised as TRUTH FROM GOD? Multiple marriages? Could be narcissistic as they are attracted to religion and politics. I was spitting out the pits but no longer can stand eating the cherry.

Does it make one a psycho ( whatever) by his beliefs or his actions. If he is bringing awareness of the evils of pedophila and children are being protected because of it perhaps he is trying to redeem himself from past actions and sins.
Thank you for your awareness I will look into it further.

If you don’t care about his police record and think no one should be warned then you’re right it doesn’t matter.

Victoria, Daniel knows NOT what he speaks. It’s been proven over and over again since 1998 when Daniel first came up on the internet that he is a false prophet and a constant liar. He is not repenting for past sins. Daniel believes he is sinless. If you truly do research about him, you will find that this boy worships SATAN. Good luck and hopefully you can get out before he tatters your soul.

Amazing article. That guy gave me pause as well. You are an Inspiration to MEN, Mr. True

i read that as “he gave me PLAGUES as well..i thought “whoa, Daniel’s taken the god complex to a new level..hes causing actual plagues”

He’s probably hired help like that lift the veil turd.

viscerally, I couldn’t take 5 mins. the first time i saw him, and never went back. didn’t know why i didn’t believe him other than my body said so and that was good enough. so i understand. and bravo to you for speaking it.

“The truth is dropped and lies are always dangled.” Ugly stuff, thanks for alerting us of this PSYCHOpath.

You keep overwhelming me with the truth. Thank you so much for your work on this. It’s brilliant.

Your comments make my drums bigger! Thank you, NanaFan.

You used the word “psychopath” and “psychotic” interchangeably. This is incorrect. Psychotic people are out of contact with reality. Psychopaths are rational but they lack empathy and a conscience.

You are correct. If i fix the article, let this comment be proof it was there. Thanks!

Truth be revealed about DL.