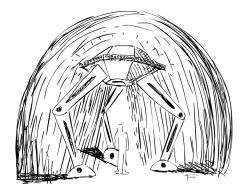 Last night I had dinner with an optical engineer who was explaining the merits of molecular tweezers. He was strumming on about lasers and spectronomy so I asked him a serious question about humanoid cloning. He mocked, “that’s a little too tinfoil hat” at the topic. The table laughed with the engineer and I found myself muted once again by the flypaper of conspiracy. Undeterred, and mostly autistic, I stopped the table of six men to explain just how crazy I was about cloning. This is a rough transcript.

As a child, I heard the military industrial complex was fifty years ahead of the market. I remember a lab in England cloned Dolly the sheep twelve years ago. I know we splice and move genes in academia. I know in fifty years, we will clone some type of servant. I know we can predict how it might function and what it might look like. For example we’d give it thumbs and fingers to be handy. We’d leave off fingernails, the sex organs, hair, or even a belly button to keep it simple. We could avoid the stomach and intestines altogether and recharge the unit through photosynthetic skin receptors like a house plant. We’d want its brain to be low calorie and predictive. We keep it simple. We could drop the outer mammalian lobes of reason and emotion. Let’s just keep the reptilian parts, the triune brain. We can rig it to work by remote control. We’ll need a big head to fit the antenna. After some prototypes, we would have a rechargeable, biological robot that’s docile and cost-effective. We would marvel at our pet snake with elbows and kneecaps. We could present it to the planet. They would hang on its every word like it was the Messiah. They would call our creature evolved and ascended. Its first word would start a religion.

I stopped talking abruptly. I had no prepared closing statement. The table begged itself for its own reaction. Someone put ice cubes in their mouth. I looked to the engineer to prove me crazy. Our table was paused for his answer. The mind control fell out of his face hole and into his nachos, “The cost. It. It would be unimaginable. The amount of time…Ridiculous.” The table exhaled in a unison of agreement. The intelligent engineer changed the subject, “Did you know L.E.D. pens aren’t technically lasers?” Someone answered, “Oooo. Really?” The tour bus drove off without me.

Modern America is in a multi-layered state of mind control. That evening I felt trapped inside an aquarium listening to a goldfish tell shark stories. I was surrounded by guppies who needed that goldfish to keep them busy. Every fish in the tank pretends this is the real ocean. I was staring through the glass, wondering why I can’t just swim right through.