We forget Trump wears orange makeup. This is a byproduct of white-collar wrestling. We root for politicians and parties the same way we root for wrestlers. All of them wear makeup now. All of us know DC is a stage but we pretend to not be pretending.

I’ve gone from joking about “Orange man bad” to feeling the reality of “Orange man sad.” It seems every President knows how to fail the truth. We learn eventually that voting is just a soothing device to help us with the denial. This is the result of Stockholm syndrome. We will reclaim our land and airspace again when we wake up. If we wake up. We used to be a confederacy of experiments. We use to have something called unanimous government. We can make government a tapestry of agreements again. All we have to do is open our eyes and get out of the van.

Tulsi, Assange, and Trump are pushing the narrative that Saudi was behind 9/11. They each speak the same words in unison but the media finds a way to frame it as opposition. Why are people still falling for this? The domestic attack on 9/11 required American military compliance. No one has been fired. No one has been punished. Those who knew it was coming have profited the most. 9/11 was a textbook pillage. During a hurricane, the poor will steal televisions under the cover of a mob. During a satanic ritual, the rich will steal everything under the cover of trauma. 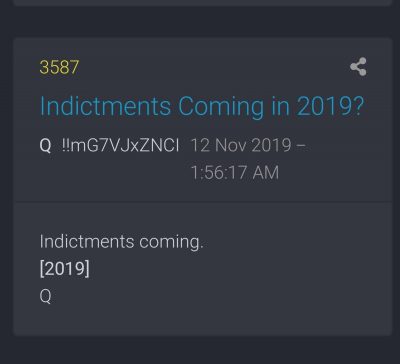 We are wrong to fight the cabal. Kabal is a more accurate spelling. The real cabal is run by kabbalists. Zionism is one of their skins. The kabal is sacrificing the cabal to hide from you. Hope that makes sense. Steve Bannon is QAnon. The evidence continues to pile up. Did you know he gets paid every time you watch Seinfeld? The man knows how to sell a narrative. Epstein had to die in public without QAnon being online. Now that Epstein is closed, Q has reemerged promising indictments again. I’ve never doubted indictments were coming. They’re an important part of the show. It’s crucial they’re released AFTER the impeachment fiasco. This will make the indictments “problematic” and therefore stretch over reelection. It’s crucial these indictments appear to “drop” but are instead dangled. Steve Bannon (#QAnon) knows this game well.

Note. If Donald Trump would have released the sealed indictments a few months ago, say post-Mueller, the entire impeachment thing would be dead in the water. It would have been seen as a reaction of the guilty. This would ruin the game we pretend is representative government. But I have been told asking questions makes me negative and ruins the show.

“How does fixing Washington DC now prevent it from happening all over again in 4-8 years?”

The more we take care of ourselves, the less we need a government. Delegation is a form of abandonment. The land needs us for its militia, not DC. DC couldn’t even protect it’s own Pentagon. The land needs us to protect its soil and waters. DC will continue to rape the land under the auspices of protection. The land needs us to connect with it and our ancestors buried in the ground. They call our ancestors demons so we’d abandon them. Once we did, they made Washington to replace them. To delegate our sovereignty is to abandon our ancestors. Real patriots are awake. They understand what their government is doing and say “no.” There is nothing righteous about trusting a plan you can’t see. That’s not trust, it’s obedience. Patriots are the antithesis of obedient.

For 11 years politicians decided Epstein was more important to them as a narrative than an incarcerated felon. And he still hasn’t faced justice. “The NWO lives under a wrestling match” The Epstein meme saturation shows just how saturating the cabal is into our minds. The name of the game has gotten really confusing now.

“Enjoy the show by trusting the disinfo that’s necessary for patriots to be in control.”

And this is the strategy we call winning. Every big account is playing along. The people who were investigating truth 12 months ago are now banging a drum. Their chemicals have fermented. They lose reputation to the Pale Horse they’ll never behold. Truth is a virgin we cast into the volcano for breakfast.

First, Washington limits you to one of two parties. Then they sponsor a parade of whistleblowers pointing to Saudi Arabia in unison. There’s no one in the media telling you the government did it. Not Snowden. Not Assange. Not Trump. Not Tulsi. Not Q. No one will tell you the truth.

The NWO wants centralization more than they want anything else. If the Clinton Foundation was running a global pedophilia network and witnesses like Epstein can’t be kept alive we need a global court. One World Court = One World Order. This narrative requires a Whore of Babylon. I don’t say that to be insulting. A witch-burning drives the cattle home every time. Hillary’s role is very important. Crucial. “They never thought she would lose” is the foundational magical thing everything else is built upon. Trump is the outsider, renegade champion who can’t show his true colors yet. Not yet. He must play along a little longer. They said the same thing about Obama.

We must ask ourselves something vitally important. What magical thing happened between Obama and Trump that ended the cabal? Was it a civil war? Was it a massive arrest? Or was it simply a change from blue to red? What magical thing happened to make us think everything is profoundly and fundamentally different now with Trump? All we can point to is a general election. A general election where only a few states decide who is the nominee. Where a handful of electoral college members vote with no scrutiny. Have you ever met your electoral college representative? Have you ever heard a losing candidate blame the college for fraud? My point is, the electoral college is above scrutiny in the eyes of our controllers because it’s part of the illusion we have in place. This is professional wrestling without a giant golden belt.

It’d be cool if we had a “thought-leaders tweet the truth” day. Where just once all the big accounts could actually tweet hard truth about 9/11, the dangers of Zionism, How Q is attached to Israel, or why Republicans can’t be the good guys. Until then, we’re dying over here. We could be working as a team but big accounts find it too risky to breach these lines. So they prop up old worn out enemies and pretend to dethrone them again-and-again for likes. It’s the same kind of professional wrestling we see in Washington right here in the truth movement. They horde their own light to spend it on the ladder going up. Once you start compromising it gets easier each and every time.

um you are right and there is a grammatical error, “Have you ever me your electoral college representative.” I just found this site, and everything you say is 100% true. and so will be sharing everywhere .

What magical thing happened? A civil war at the top of society 9 year ago, this is the aftermath. But you would know that if you really had a clue.

It is a big responsibility but with your country beng the ony modern one built on freedom the answer has to come from you ! I’ll try to have your back but we’ve been traumatised for centuries!

I sure hope you’re wrong.

wow, super piece of writing…. so well said, so important…. your leadership is showing clearly, your clear thinking is showing! That is how we tell a true leader, by CLEAR thinking unmuddied by fantastical imaginings directed and produced by theatre experts, wrestling show directors and soap opera script writers… may you be influential! Hold your center.