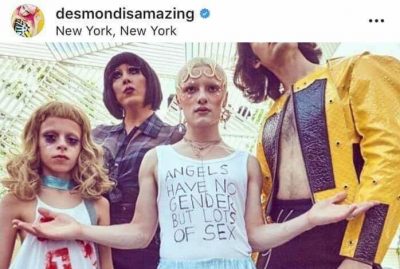 I saw a yellow jacket today through childhood eyes. I was precious in the trance. We are fully immersed in our senses. We tune so deeply into a signal we disappear into its verb. A child is lost in the department store as he ducks inside a rack of raincoats and jeans. His mother is calling only a few feet away but the boy is 20,000 leagues under the sea. He is hunting the Kraken. We are older now. But life is still lived through a trance. Adults are jaguars in raincoats hunting for food in JCPenny.

Man is a sensual creature, fully immersed in the nervous system. The deeper one is seated, the stronger the soul. And sex is more than sensual. Sex is alchemical magic. Sex opens the stargate of life. Sex magic is real whether you believe in magic or not. The sperm and egg are a circuit in the electric universe. A corporate LGBT program is stifling this magic in the height of summer when minds are out of school. There are socio-political reasons to push and install Pride Month. These reasons are eugenics and victimhood engineering.

You can be gay and object to Pride month. You can keep sex intimate and special between consenting adults or you can use it as a tool to mock and provoke people while labeling them bigot for not cheering. If we want to let our Pride out let’s be real about it. Corporations are pushing sodomy and scissoring one out of every twelve days of the year. This makes an impact on our psychology. We are called bigots for pointing this out. I have been told it’s a display of pride to say the word gay and a display of hate to say the word sodomy. Why? The definition of sodomy is sexual intercourse involving anal or oral copulation. If there is shame around that word, Pride Month should be working to dissolve it.

Is being gay partially cultural? Why is it not acceptable to ask or even think so? We are rebuked for even asking what determines our sexuality. We are told no one would ever choose to be gay. The persecution is so terrible no one would freely choose that path. Ask the politician how weaponized persecution is a motor. Study Stockholm syndrome or anything counter-culture and you will find an endocrine system feeding on being the outcast. We are told gay must be genetic in an effort to take away our volition. We are told we can’t help what we like and there is nothing we can do about it. But the truth isn’t stupid enough to buy that. What we watch and ingest will always come out in our habits and proclivities. The trance we inhabit now is determined by all of the trances we lived in our past. Media sets the pace like a psychic metronome.

In today’s world, the word homophobe means someone who doesn’t believe in victimhood. Calling someone homophobic for rejecting corporate PrideMonth is like calling someone white-phobic for rejecting Nazis. These phobic references are mental land mines and the people that plant them for you to step on are the ones who are festering a deep core shame. Shame is a commodity.

We are responsible for what we do as zombies. If you grew up victimized by the system or through epigenetic trauma you will seek shelter inside a group that caters to victims. We place victimhood on a pedestal in America precisely so we can grow more of them. Insanity is a crop harvested every April 15th. We just call it freedom. Victimhood is a pit you’ll never escape because compassionate people keep pushing you back in. This is the horror of blindfolding our empathy. We distribute victimhood on a tray like free samples at the food court.

Gay is not an identity. People who lack identity don’t know the weight of their own name. Mind control is an instrument of shame and fame. Shame is applied to anyone heterosexual while fame is applied to anyone homosexual. These are both forms of abuse. This is the blueprint of triangulation. By legislating hate laws we declare a hierarchy of citizens. The rainbow flag is a seating chart. This hierarchy will always breed injustice. Anger is a natural reaction to injustice. But anger breeds victimhood when we call it toxic masculinity.  There is no LGBT community. There is a universal pursuit of happiness shared by all people. No one objects to that.

If America was homophobic we’d throw people off buildings. Instead, we dedicate a month to pushing special legal classifications. This isn’t equality nor is it justice. It’s called narcissistic abuse. There are places in the world that are homophobic. They will throw you off a building for being a homosexual, the wrong religion, or for driving a car while having a vagina. We don’t criticize that. We can’t vote our way out of mass psychosis. People should be fighting psychopathy not homophobia. The same goes for racism in America. Both are corporate mind control tactics designed to groom victims.

Pride Month is a cover for psychopaths to do what they always do. Push infanticide, pedophilia, disassociation, and eugenics. If this was about pride, we’d be ending genital mutilations and stop calling them circumcisions. Pride Month is a form of empathy-jacking. This is a technology of mind control.

Pride Month shows us the mechanics of controlling a populace. It’s no different than a cowboy managing his cattle. Pride Month is the human version of branding and gelding. It marks each of us with a different sigil and corrals us on an island of flies. We are the lords of trauma. It’s leathered our flesh too thick to remember our skin’s true fidelity. Anarchy is too heavy a yolk for our sovereignty to bear. We want to rest here a bit longer pecking for worms on the animal farm. May the protein give us the motivation to finally rise.

Excellent piece, James! There are two genders and adult diapers (aka ass-tronout pants) are the end result of sodomy!

Difficult subject James – it may be something a straight person experiments with as a teenager when they are most fluid and confused but that is because they are already confused. If we had pride in being women or men then none of this could happen – there might be one of two who would be gay but not en masse. It is complete social engineering to promote relationships which do not produce children as part of the depopulation agenda. Very sad and very confusing for young people although it must be terrible to have to skulk in smelly toilets and possibly get goaled for your sexual proclivity. Now we have gone to the other extreme – neither were organic.

Indeed. Joseph Sciambra saw through the brainwashing after living 12+ years as a homosexual man. This is a real eye-opener!  Graphic Warning https://youtu.be/J8feLkkL7BE