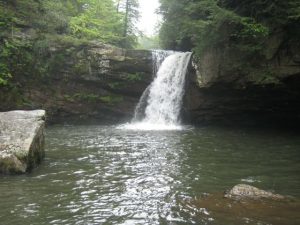 I am not “woke.” Woke is something that already happened. Life is a living jaguar. The jaguar is a smart hunter. He steals your vigilance while you are sleeping. Once gone, he no longer needs to kill you. You will do this for him. No one alive can be woke. Life is always awakening. You are life. You are awakening.

Two days ago I hiked in to Savage Gulf, the Grand Canyon of Tennessee. The worst storm of ten years decided to join me. It was my first solo trip with a backpack. I spent the first day diving from boulders into a mountain lake with beautiful strangers. Yesterday afternoon was as peaceful as the morning is now. I had staked a fresh campsite high on the southern ridge top. Black beans and white rice were boiling on a fuel stove. The calm canopy was joining me for dinner. It was the place you might catch someone whistling a tune.

The zipper in heaven came open. The ground around me turned into mudslide. The pot filled with rain in seconds, which knocked over the stove, which pierced the fuel canister, which set a fire that would not go out. In seventeen seconds the world I knew before this was over. I spent most of that night crouched on my ankles; in a tent stuffed with water, under a nature show of flames, lightning and thunder as I listened to the crashing of trees all around me.

I emerged in the morning, stunned and soggy in the gentle sunlight of dawn. With shivering arms, I pack my wet, melted campsite. I salvaged a granola bar from the disaster zone and slid it into my pocket. I am eating it now as I overlook this savage gulf. I have never been so alive. I exhale down into the valley as my troubles were finally over. What a night. As my fist formed around an empty wrapper, the sound caused something at my feet to quickly coil. Something with scales. Something with a pattern like diamonds. As quickly as I could, my legs retracted into my torso like landing gear. I moved as fast as my hydraulics would let me go. See what happened? I thought I was woke. I am awakening.