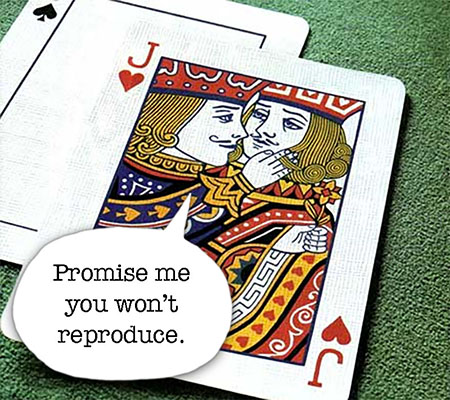 What’s the difference between saying “I am gay” and being in a genital cult? Seriously, I can’t tell the difference. In this column, I am going to argue that the LGBT community is actually a religion and our anti-hate hate laws and initiatives have violated the separation of church and state.

To begin, LGBT is not accurate. The proper acronym is GRLGBT. This correctly classifies LGBT by hive rank. At the top of the acronym we have gender (G). Gender trumps everything. Race (R) is a very close second. The bronze medal is a toss-up of genitalia blending. We can simplify the equation by removing gender from the “LG” and we see the third tier is a genitalia prejudice ranking system. For example, two vaginas will always beat a pair of penis. Since bisexuals are so non-committal, they bring up the rear. If you are wondering why “trans” is last it’s because a trans person could be a heterosexual. So to review, gender beats race, which beats genitals. Just like poker, your entire hand counts so a gay minority would trump a non-gay minority. A royal flush would be a trans-racial-lesbian combo.

The ceremony to join the equality movement is a public declaration of chastity to anti-reproduction. So if you have a “front hole,” you are promising to only have sex with other “front holes.” In a deeper way, you are promising not to produce. This core-belief is hidden under a pile of genitals. So the genital cult comes with a vow of celibacy. It’s a promise to never engage in their own reproductive power. Sadly, really kind people lose their identity in this cult. They defend this cult because they are told by the media how oppressed they are. Our compassion as humans is as giving as it is gullible. Someone says, “I identity with being gay.” They take a piece of themselves and give it to the movement so that when they see the movement they can see themselves. This is psychological projection not equality. This is how cults work.

The equality cult is an elite class in society. Membership has privileges. But a class only exists in plurality. You cannot be the only lesbian. You cannot put a lesbian under a microscope and find “the lesbian” inside her. Joining a special class is a choice of identity. It’s a part of the inside clinging to something outside. To relate to something that is external and intangible is a belief system. This is what we call a religion. Lesbianism is the religion by and for female genitalia. A religion cannot be sanctioned by government or university. Equality needs to be squelched and exposed for the dogma that it is. The hate laws on the books are unconstitutional and support collectivism.

But underneath this political grass fire. We miss an obvious truth. The LGBT agenda is destroying the herd population. The equality movement is a mind-splintering eugenics program. If you wanted a population to sterilize themselves, equality politics would be a good prescription. Hormones in our food wouldn’t hurt either. If we splinter the genders into a spectrum, how will we match up biologically? Will we even? Keep in mind, the lowest member on the totem pole is called a “cis.” Like it or not LGBT freedom fighters, you are all united by one cause, your celibacy to anti-reproduction. This common denominator of self-rejection is the breeding grounds for a shame cult. The same cult that calls you a racist unless you believe in “equality.” Or a sexist. Or a homophobe.

Indeed. Joseph Sciambra saw through the brainwashing after living 12+ years as a homosexual man. This is a real eye-opener!  #GraphicWarning
https://youtu.be/rD5VKUVPxXo

Sadly, the eugenics agenda targeted at the LGBT community doesn’t stop at ending reproduction. The LGBT community is encouraged to spread STDs, especially HIV/AIDS, through massive amounts of unprotected sex with strangers. The trans community has a ridiculously high suicide rate. There’s the “bug-chasing” where HIV is willingly passed on to others. And then there’s the bonus layer of drug addiction on top of all this misery. It all amounts to shortened life expectancies in the LGBT community.

And then when someone dies as a result of their own behavior, the whole guilt machine starts up all over again and we are reminded how its our fault they died because we didn’t accept them enough, and they are a victim- no, a hero, because they were so brave they were not afraid to be proud of who they are. They just weren’t brave enough to be proud of who they are and then live a full, happy life. But basically they are told if they attempt, or succeed at suicide, people will love and care about them. First they are told that, if they are gay or trans, then they are special and their parents will Have to give them extra love and attention. Every child wants to be special in their parents eyes. Every child wants more love and attention from their parents. So, if you aren’t really good at sports or math or singing ans dancing, and you seem kind of lost and confused like all kids do from time to time, they have a perfect solution for you! It doesn’t really work, and pretty much no gay couple lasts more than a year or two and trans people are constantly miserable, but hey, Everyone’s doing it! Even celebrities! From age 12 or so, the sexes are kind of afraid of each other… how do you kiss and make out the right way, how do you even talk to the opposite sex in a flirty way, just copy what we see on tv? With all the encouragement to do so, it’s almost easier at that point, for a lot of kids, to just… be gay. It allows you to delay having to deal with the uncomfortable situations involved with approaching and learning about the opposite sex.