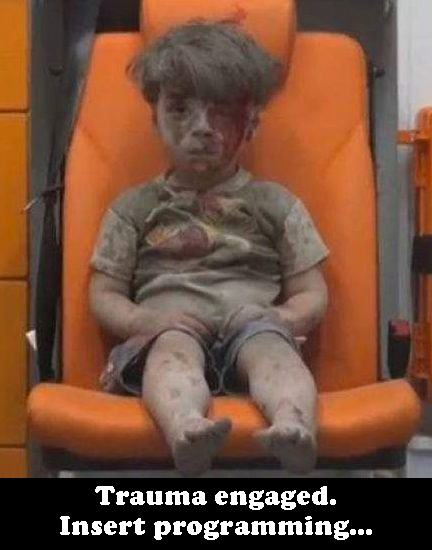 Trauma programming is a two-step process. Step one induces shock. Step two induces programming. When you freeze a mind in terror, its receptors become dilated like pupils. The programmer can insert the program like eye drops. Ingestion is automatic since it bypasses the reason. In trauma you are working directly with one’s reptilian brain. A mother uses trauma programming when she finds her toddler playing with a fork near an electrical outlet. Mom can’t reason with her child about this, this is far too dangerous and important. She must program him. She induces shock by broadcasting terror with her face, voice and body language. She uses touch to strike a sense of urgency into the skin like a lightning bolt. She might even smack the child on the bottom to induce a state of pure hypnotic reception. She knows when she has his attention. The patient is frozen like a zombie. She inserts her program, “John Jacob Schmidt! Don’t you ever do that again!” Jacob is beside himself with fright. This state lasts for a moment, and then the shock is over. As reason returns, he begins to cry. The programming session is complete.

Trauma programming also works in a group. The steps are the same. How do you traumatize a group? You shoot President John F. Kennedy in broad daylight. The assassination induces shock across the entire population. Next comes the programming. A story is inserted about a single magic bullet from a communist janitor. People in shock don’t ask questions. The mammalian center of the brain has been subdued. The reptilian has pushed itself into the captain’s chair. But a snake will always bite at what he is given. Buzzwords like “A dozen box cutters” are swallowed like mumbling flies. Trauma turns an entire nation into alters. Look at how quickly we accept a story since J.F.K. Look how we still buy narratives like Parkland. America is a nation of alters. 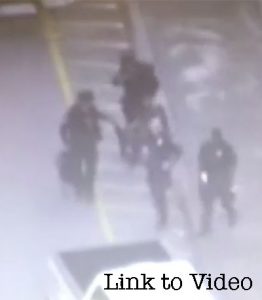 On the morning of the Parkland Shooting, five armed men in a white Ford pickup rolled up on campus. Two were wearing badges, the other three were in black Kevlar. They geared up at the truck in silence. The adrenaline was flowing. Like clockwork, the school’s shooting drill began with a bell. The contracted ritual killing had started. The driver stayed in the truck. The other badge got out to use the radio. He waited for his men to take position. He would hear them when they were ready. Each of the three men wore the same black mask. They each took a floor and in unison began shooting across the hallway. They were corralling stray students back into their classroom. Any eye-witness was targeted directly and murdered. Seventeen witnesses died in the ritual.

According to the police scanner audio LINK, the officer was asked directly for a shooter description. His answer was, “Shooter is a man. His name is Cruz.” But this is not a shooter description. This does not paint a picture for other officer’s on the radio to identify the suspect. A shooter description sounds like, “Shooter is a white male five-foot-nine inches. 130 pounds. He is wearing a gas mask.” Parkland’s on-site officer, who knows the kids personally, was off campus during a scheduled active shooting drill. Every part of Parkland and Cruz’s story doesn’t match up. Yet the nation swallowed it without a question. This is the same district as the Ft Lauderdale shooting. The same district claiming to be ground zero for the Zika virus. The same district run by Debbie Wassermann Shultz. This district has been programmed before. It is receptive to life as an alter.

Parkland is one of many false flags. America, the society of alters, has learned to accept it. We call them “tragedies” so they hurt less. We update our profile pics in a ritual to forget them. Trauma programming is the key to mind control. We are living survivors of satanic ritual murder. We are still under its spell. We have to wake up now.

The story continues in Part 2, The Vanderbilt Alters.

I love your mind James true

I agree that people too easily accept the narrative that is given to them. I used to be one of them. I knew in certain instances we weren’t getting the whole truth but never would I have imagined the satanic evil behind so many of these lies. Never did I think that my “government” was purposely setting out to destroy my country as a means to rule the world. My mind didn’t work that way. I was taught to see the good in people. Not until my search for answers to Las Vegas and then stumbling upon Q did I begin to question my belief system.