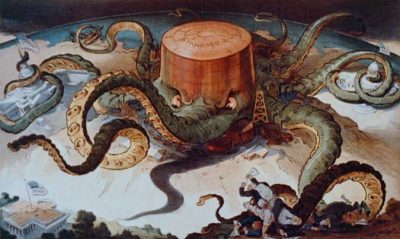 Zeitgeist is the mind of God. We insult each other when we assume humanity’s thoughts are separate from him. God is the ant dragging a crouton as much as he is the oil tycoon crowned by a secret society. Strange is the lack of information on the richest family in American history. When tracing the source of John D Rockefeller, Sr’s fortune, all archives “relating to both the family and individual members’ net worth are closed to researchers.” That’s the story we accept. Truth insists we see the shadows. The Rockefeller bloodline is steered from behind a forbidden curtain. There are meta-people living above the laws of countries and birth certificates. These entities employ legal wardens like the Rockefellers to run the farm. Four generations of Rockefeller demonstrated a brutal loyalty to the constriction of energy, mind, and medicine for power. They were the pioneers of globalism and they weren’t working alone.

We know a bit about John Sr’s father, William “Devil Bill” Rockefeller. He sold potions under the alias of Dr. Levingston. William was many personalities. He was a married man with eight children and a practicing sexual predator. His housekeeper Nancy Brown gave him two illegitimate daughters Cornelia and Clorinda. The following Spring, when John was two years old, he would watch his father rape the housemaid. Ms. Vanderbeak was in John’s bedroom changing linens when William entered the room and stuck a gun in her mouth. He squeezed her neck like a warm goose and finished her over the bed rail. It was a May Day afternoon for John playing with his blocks in the hallway. John was accustomed to violence. His bloodline had been stripped of morality a long time ago. John would battle depression for the rest of his life. Man is haunted by the sins of his father. We make deals with our children’s destiny every moment of our lives.  Trauma was a dangling puppet string for the Rockefellers. A secret society with longterm plans can turn this into a commodity. 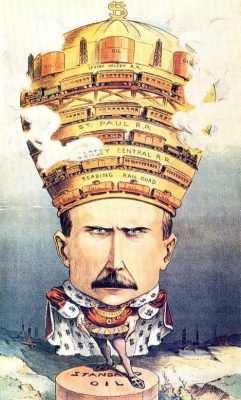 John went to college in Ohio. In his twenties, he started a supply business two years prior to the Civil War. Instead of fighting for the Union, he was poised to sell them groceries and oil. In his very first year, Rockefeller turned a $4,000 investment into $450,000. By fate, the Federal government began subsidizing the price of oil as much as 3000% and the profits flowed directly into Rockefeller’s pockets. By 1863, the talons of the Standard Oil Company, America’s first monopoly, had clenched 90% of the market. In 1911, it was ceremonially split by anti-trust laws forming the seven sisters of oil we know today. This government-enforced break-up was instrumental in making John D Rockefeller, Sr. the richest, most powerful man in America.

On April 20th, 1914 in Ludlow, Colorado a thousand coal miners stopped coming to work for Mr. Rockefeller. They had been forced out of their homes and living in a makeshift camp while on strike. Sixty-six miners, their wives, and children were gunned down and burned alive on the camp’s property. The guards and the state militia were hired and supplied by Rockefeller. No one, including Rockefeller, stood trial for the mass murder. Deities are ranked by their omniscience, omnipresence, and immortality. Rockefeller bloodline was omniscient and invincible from the laws of man. They were guided by the eye of providence through each generation. Every Rockefeller lived a long and healthy life. Each shared a common goal for globalization. Think about it. Wikipedia politely calls globalism internationalism. From Kissinger to Rockefeller to Soros – every proponent of globalism has been a rich white guy. No one calls these people White Internationalists.

Eleven years prior to the Ludlow murders, the richest man in America became the godfather of compulsory education. In 1903, John D. Rockefeller spent $180 million dollars building a factory for the American mind. The United States Congress adopted his plans for the General Education Board with a mission statement, “the people yield themselves with perfect docility to our molding hands.” Compulsory education established the government as the shepherd of the mind, and the people as its flock.

“We have not to raise up from among them authors, editors, poets or men of letters. We shall not search for embryo great artists, painters, musicians nor lawyers, doctors, preachers, politicians, statesmen, of whom we have an ample supply…The task we set before ourselves is very simple as well as a very beautiful one, to train these people as we find them to a perfectly ideal life just where they are.” 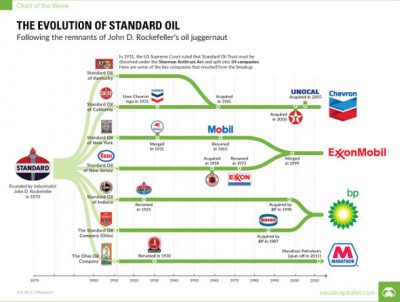 All the propaganda we’ve swallowed comes from centralized compulsive education and media. History is written by a single winner and we are trained to repeat their story like a jingle. The richest man in the world wanted something beyond money. He wanted global obedience. In 1923, nine years after the coal miner massacre, his education foundation would go international. His addiction to control superseded human life. Rockefeller was turned by the same gears that turn modern CEOs like Jeff Bezos. Men at the top are driven, broken, and predictable. They have been bred with a fetish for asphyxiation which makes them an ideal asset.

The boa constrictor does not suffocate its prey. It renders the victim unconscious by eliminating its blood flow. This tactic made Rockefeller a success in oil. It made him a success in medicine when he declared an economic war on plants. The 1910 Flexner Report set nationwide protocols for mainstream science in teaching and research. As a result, nearly half of all medical practitioners were jailed or closed down. Rockefeller created the American League of Municipalities and the American Association of State Governments to directly influence small towns and state legislators. Under his nationwide influence, all doctors and hospitals would require licensing through a Rockefeller controlled board. This affected all hospitals and teaching institutions nationwide. Combining these two influential organizations with his General Education Board reveals Rockefeller’s desire to monopolize America’s energy, education, and medicine. 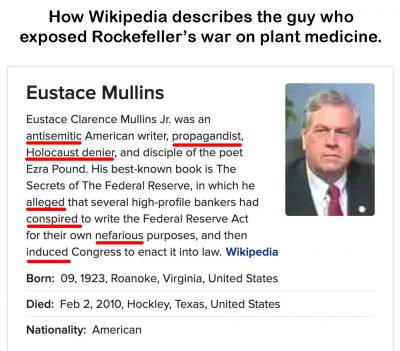 The term conspiracy was applied by the CIA to cover up the truth of JFK. The term “quackery” was applied by Carnegie and Rockefeller to centralize allopathic medicine. Allopathy is the treatment of the symptom. Homeopathy is the treatment of the cause. Treating symptoms is an industry. Treating the cause kills the treatment industry. The science of radiation and pharmaceuticals was born as an economy. Probably more than anywhere else, mind control is rampant in medicine. One is dismissed with ad hominem the moment a thought crosses the line. Writers like E. C. Mullins who exposed the 1910 Rockefeller takeover of big medicine in his book Murder by Injection are blackballed in public with labels like “propagandist” and “antisemite.” This is the barbed wire fencing of mind control. It’s as easy as an emotional reaction from being shunned or praised. Propaganda is the product of an allopathic society. Dissonance is sold as a cure for dissonance.

Why would God work through Rockefeller’s constriction? Where is justice in a world of energy slavery and profiteer medicine? The answer lies beyond the ball fields of good and evil. In the parking lot, our consent waits in the car while it’s raining. Man is brought to this game to discover a line separating trust and slavery. If God was recruiting the perfect team, he’d chose the players least susceptible to corruption. We betray ourselves giving our consent to a stranger called government. Losing the sovereignty of a state’s airspace means losing the sovereignty of our minds. Our history has been fully corrupted by their propaganda. The people who invented globalism burned Atlanta and labeled the south a tribe of traitors and racists for complaining. The mind control will continue until sovereignty improves.

I’ve turned this story into a screenplay.

As usual spot on info and very useful for having eye opening discussions with people. Can’t believe it but a very close friend just let out they don’t now what i mean by Mind Control I was just about to loan them your book when after 40 years they walked out after frank discussion – is there some machine which knows what’s coming and influences people on a specific and individual basis??

Wow. Well said. Let’s use our make it so powers and flip this switch. At the end of my bloodline, and the end of my time in the end of all time, I can’t think of a better plan. Bravo

[…] James True on Standard Oil, Rockefeller, and his successful foray into mind control. […]

Ole Eustace was one of my 1st loves. People should read his books. But they’re too dumb to read now, aren’t they?

Made me tear-up, James. Excellent excellent work! My family is from KY, wherein the same events of the coal fields repeated again in the early 1970s. The Mine Guards opened up on the Strikers. We lost many, including my great uncle.

My eldest son is an MD Resident. My youngest son is a state certified teacher. Both, at 26-31yrs old are just now recognizing the utter bizarrity of each of the inner mechanations of their respective fields.

I pray our society is almost at the topping point.

That was very ugly of Wikipedia to use the terms they used to describe Eustace Mullins. Very ugly and very unsurprising of them to do so. The fear of being termed and labeled as anti-semitic is a fear many hold, and is a fear that keeps them quiet of their true opinions.

Brilliant writing speaking truth to centuries of lies and disinformation.

Dear Lord! I knew Rockefeller was evil but I didn’t know the bit about the takeover of natural healing. And I thought it was Ford who started public school so he could get labor for his assembly lines.
These people who are addicted to power and control are a curse on the Earth.
Psychopaths and sociopaths are in charge still.
Thank goodness their offspring are gutless wonders that can’t keep up with the level of evil expected of them.
It’s about time the team that God has recruited shows up.
Thanks,
Pam

They are here but it takes time to turn this ship around. The controllers have been at the helm for millennia. If it’s done too fast, you’ll get Toffler’s Future Shock syndrome and the waking sheep could lose the will to live.

I DeWitt
Reply to  anon

In the Twinkling of an Eye