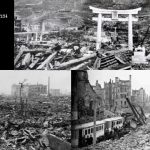 The main James True Live channel on YouTube is still under restrictions. I hope to start publishing there again after March 21st. In the meantime, I have been streaming on the DojoEarth channel and of course, Rokfin. Rokfin has yet to block or restrict any of my work and it is refreshing.

I’ve been building the idea that Project Bluebeam is bigger than we think and today’s episode added the concept that nuclear warheads are included as part of this program. Looking at these three photographs from war I challenge you to determine which were a nuclear blast vs a fire-bombing. Let’s add to this the work of Halton Arp who published his Atlas of Peculiar Galaxies containing 338 examples of anomalies challenging the understanding of space and relativity. As another example, the work of Pratt engineer Irving Mayer who paraded 2000 Davy Crockett field nukes around Europe without ever pulling the trigger. The fog of war is a popular feature as we look at the use of inflatables at Normandy as proof you could blow up tanks all day long as long as you had a good foot pump.

I think it’s worth questioning all our assumptions and assuming we’ve been lied to about everything.. but radioactivity does exist right? It’s measurable? So what are the tests that have been done on sites of bomb drops?

Why do any tests .What difference will this make to the reality we are living through. You don’t have to buy into the lies and propaganda that is coming through the media. That is not your reality.

I have been following the Pratt family for hundreds of years, ever since Disraeli’s bitch ebenezer pratt helped Cromwell orchestrate the regicide of Charles I. Led to the jewish readmittance edict and a big step toward the central bank of England everything these ppl are connected to isnt good for the home team. not surprized to see them associated with the nuke hoax

I definitely agree with PBBeam encompassing more than just alien agenda. The alien aspect of it has always been a red herring so people don’t look at the mundane seemingly trivial yet in-the-long-run impactful ‘blue-beaming bs’. I used to fear nuclear weapons like most of us were taught. Now the only that comes close to going nuclear is my dumbfounded-ness that people still choose the lies over the truth. I must have missed the PBS episode that explained how the lovely people of Hiroshima and Nagasaki evolved to withstand nuclear radiation. Maybe I was too busy going nuclear trying to fathom the radiated minds unable to choose to see truth over the cartoon-scribbled blue-beaming bs. Maybe. Love yeah brother, always have, always will.