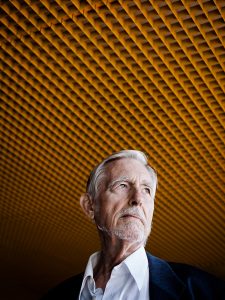 Big Bang is the only theory taught in school. It is the only opinion introduced or ever presented. It seems to be a form of mental programming. Consider the ramifications of believing in the Big Bang. It makes use feel small in a randomly exploded universe that’s 13.8 billion years old. We don’t feel important as a fish that crawled out of pond scum to fornicate into a monkey. We don’t like being considered a creatures from a black lagoon. We lose confidence in our humanity as a tiny cinder of a random cosmic detonation. The psychology of Big Bang controls our every outlook. It puts us on the outskirts of a spiraling arm, orbiting the center of a vacuous black hole eating every form of light without prejudice. And none of this can be directly observed. These secrets were scribed by the hands of an elite few in academia. What is the weight of their feather on your mind?

Halton Arp pulled up to the train tracks and shut off his motor. He could have made it across, but he wanted to feel the train’s energy. He got out and sat on the hood of his Buick with his arms folded. Stillness settled across his mind as he saw the train approaching. A giant steel centipede of wheels and coal was barreling down the track and Halton was as cool as a cucumber. He understood the universe and closed his eyes as the doppler effect raised the pitch of the train whistle. He felt torque vibrating the road moments before a gush of wind smashed him in the face and kept pounding. He opened his eyes to a cold fast blur of metallic snake segments carving a thundering will through the atmosphere. Nothing can stop a train that’s coming. Halton feels the rumble of passage in his kneecaps. The arthritis was killing him and he wanted to get home. The train was so loud he missed his cell phone ringing. There was a message waiting for him on his voicemail. He lost his job as the train was passing. He knew that call would come eventually. Halton didn’t believe in Big Bang.

Big Bang cosmology is massively flawed. It contradicts itself in cosmic homogeneity. We see a universe of smooth peanut butter while a Big Bang model should look chunky.  Our observation directly contradicts what we are taught yet the scientific community still enforces it. The Big Bang is cosmic dogma. The Big Bang is based on telescope red-shift measurements. Red shift is like the Doppler Effect of the train whistle but with starlight instead of sound. The pitch of the red shift determines the direction and momentum of its signal. It’s why they think the universe exploded. It’s how we measure its size, shape, and distance. The red-shift is the keystone of astrophysics and the cornerstone of Big Bang theory. 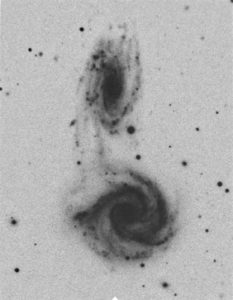 Deep past the northern wing of the Milky Way galaxy is a little known binary star system. The bigger star is sucking the tail out of the smaller star like a Frappuccino. Halton discovered these stars presenting a conflict of red shifts. They should be light years away from each other. Yet here they were, one drinking the other like a liquidated coconut. Halton added this image to his collection of 386 galaxies in his, Atlas of Peculiar Galaxies. His colleagues had finally had enough. They cleared their throats as they explained the observatory owed the scientific community an obligation to not squander the facilities’ resources on claims that have little or no merit.

The Big Bang universe has always had a big weight problem. To compensate for the physics they invented a substance called dark matter. Big Banger’s insist 96% of the universe is hidden in a veil of darkness. Dark matter or dark energy can only be perceived by a few elite theoreticians and each one’s work depends on the accuracy of red shift. The clergy of academia is as rampant in astronomy as it was in climatology. How does a dark matter psychology change your experience? Do you feel more confident being told you only have 4% visibility?

How much does Big Bang’s feather weigh on your mind as a belief? How small are we in an ever-expanding explosion? How weightless, rudderless and unimportant is a man in a soup that’s 14 billion light years across and still spilling? Evolution is an expensive psychology in a cold vacuum that doesn’t match our observations. So why is it such a large part of our programming?

Think of the weight of every feather placed on your mind by our programmers. Do you stand tall under a psychology of Big Bang? Beware the theory that makes you into a kernel of gruel in a dark cosmic spittle. You are a living Sequoia of breathing skin with feet. Let the moon see your fingertips reach for splendor. Unlock your psychology from the barrel of monkeys. Place yourself back in the center of a torus. Make this your universe and take its feather as your new psychology. How heavy is your mind now?

This is great, love your writing! So… we’re we going with this, what’s your conclusion? Read some unsettling things recently – the stars aren’t planets, just dots in the sky…