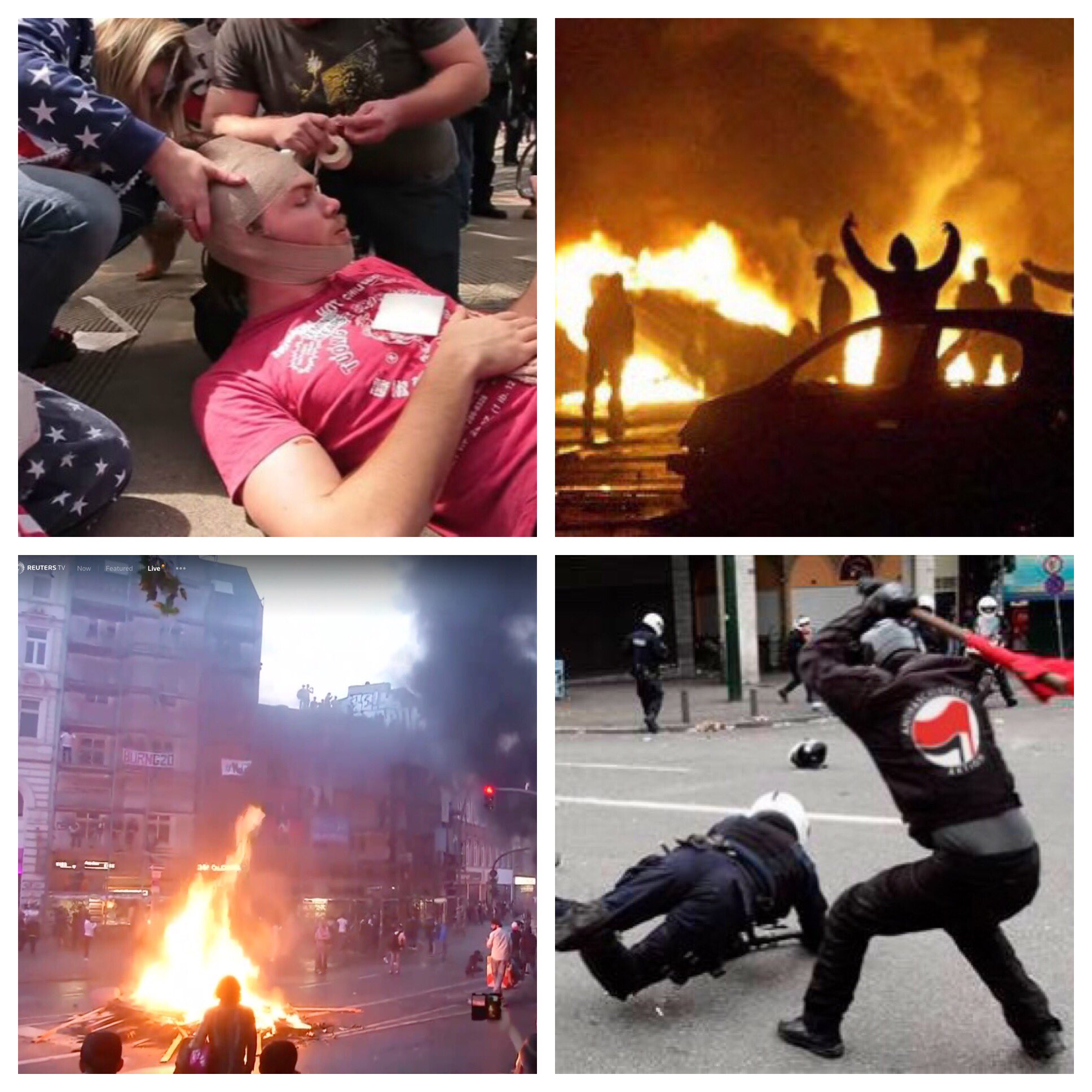 Brim opened his rucksack and pulled out five walkie-talkies. They were made of hard rubber and colored bright yellow. The yellow had been painted over with a black magic marker that had smeared off a few minutes later. Someone wrapped each one haphazardly in black duct tape. He seemed to read my mind looking at them. He jiggled the unit and said, “The black helps you stay Ninja.” My chest began to fill with adrenaline. We were going into battle.

A guy named Chris was in the bathroom on his knees with the door open. He was leaning over the tub silk-screening a blood red fist on a black hoodie. I sat down at the kitchen table to inspect my walkie-talkie. I pretended it was an older model I hadn’t seen before. My eyes peered concernedly as if I had found something peculiar. Then I decided it was alright after all. I was completely full of shit. But that didn’t matter. I was a one of the hive.

When we observe Antifa, there is no designated leader. They are cells each responding to orders that bubble up from the center. No one is the tip of the spear. The females tend to speak for the group and invoke confrontation both verbally and physically. Long-range projectiles, and running striker attacks keep the pack together. Antifa is a matriarchal conglomerate. If you want to understand their actions, you must stop treating them as individuals. They are a group biology. Antifa is a hive, I don’t mean this metaphorical.

Anti-Hate Group – NOUN – When more than one thug with a bat bash property or people they have deemed “fascist” via an informal mob tribunal.

There is a psychology to wearing a mask in public. Sure to be anonymous, but non-violent Antifa members wear masks too. This is about identity and they feel naked with their face showing. They have abandoned their identity for the hive. It’s physically uncomfortable for them to be an individual. There is camaraderie in their abandonment because in Antifa, having privilege is a form of sin. Showing your face is a form of supremacy. It flaunts a pride in the self. It takes away from the power of the group as a collective. Behind the mask, their moral code is surrendered. They identify with anonymity. It is safer there. Consider how adamant they are about doxing their enemies. Exposing people as individuals is their idea of terror.

Each hive cell has a mean group age. In public, they tend to align by class and color. Most of their demonstrations start with an announcement for anyone with privilege to go to the back of the crowd.  This is almost always white males, but the group has a system for determining who has more/less privileged. White males are not allowed to represent or speak for the group. White females seem to command a lot of influence but they yield the public floor to women of color. From the videos I have seen, this is mostly a matriarchal setup. Rarely is a male in a leading role. They do provide muscle and retribution for their females who tend to verbally provoke and direct the action of combat. They are hive commanders.

Joining the hive requires self-abandonment. Struggling youth find refuge from facing themselves in a world where identity has turned into a commodity. This is the reason we have seen a huge spike in people who identify as transgender.  This gender dysphoria is misunderstood by forgetting that age and race/class dysphoria are also symptoms of self-abandonment. The hive feeds itself through virtue currency. Proof of this can be seen at public self-flogging ceremonies where speakers expound on their own privilege and invent new ways of calling out their own evil. The hive is projecting their own evilness out into the world and absolving itself of responsibility.

Equality is Suppression pretending to be compassion 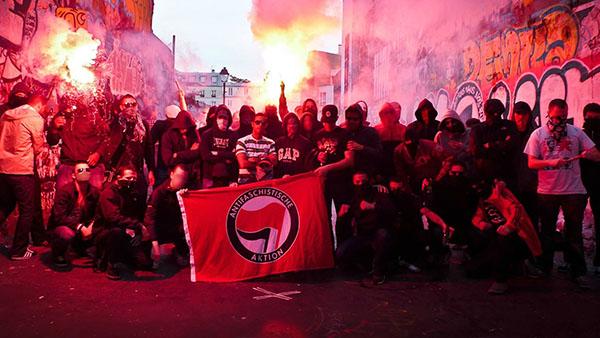 Progressivism has turned the flag of unity into a seating chart. A guilty conscience finds comfort in this hierarchy. The shame of everyone’s privilege is projected outside their system. They will ask you how you feel about equality and turn on anyone outside the religion. Resistance, aka liberty, is a violent act of evil. They have a righteous obligation to cleanse the world of this display of freedom.

Racism is a mythology used to control you. If you look through history, compassion has been used against man to control and subdue him since the beginning. We fight wars, render crusades, and hang monsters at the power of compassion. This movement puts a ring in the nose of America and walks it through the china shop of liberty. Progressivism dips our chains in gold and calls it privilege. This yoke of shame is only possible through self-abandonment. A true progressive has abandoned his or her own identity. This happens easily when we don’t support our men having boundaries. They call borders “racist” for this very same reason. The horizontal bars on their flag betray the hierarchy of progressivism. It is multi-tiered oppression with females above all males (regardless of color). Trans-people are above all females. Progressivism is racism cubed.

“The French Revolution unfolded under the banner of a self-contradictory and unrealizable slogan, ‘liberty, equality, fraternity.’ But in the life of society, liberty and equality are mutually exclusive, even hostile concepts. Liberty, by its very nature undermines social equality and equality suppresses liberty.”
— Aleksandr Solzhenitsyn

Cults follow a very simple three-step process to convert a victim. Convince a victim of the following things and you have a mindless drone:

I keep seeing people try and use reason with Antifa members which is pointless. And it’s not a matter of a lack of intelligence. It’s important to remember the Antifa cult link is an emotional one. They feed off of the hive virtue and projection so when you try and pry them away from the hive they will feel threatened and act dangerously. They view non-hive members as detached “garbage humans.” They are untouchable, expendable, and dangerous to the hive. To them, “hate speech” is anything that reminds them of their individuality. They react to public displays of individuality as a direct threat. This is why they tend to dismiss individual conversation and react with so much force.

The true meaning of calling you racist

Racism is the boogie man of prejudice. It’s an intangible, unchangeable, untouchable characteristic that is purported to be inherent to a person’s being. This invisible trait is exploitable. This exploitability is intentional. The same thing can be said for “sin.” These fishhooks are used to capture us by our compassion. It’s ironic that the way to convert someone to your cult is to leverage their own compassion against them by convincing someone they have no compassion. By admitting you are a racist, you are in effect abandoning yourself. You are telling the cult you can’t navigate your own moral forest. This is indoctrination and we’ve been subjected to it our whole lives.

Our identity is our prejudice. This word needs cleansing because prejudice is a good thing. Prejudice is our identity manifested in the real world. Our style is a direct reflection of who we are. Concepts like “cultural appropriation” are more accurately the hive mind moving into the individual. When we give in to the label of “racist,” we are letting go of our own liberty to live moral lives. Instead, we accept a mantle of evil and slipping into unhealthy behavior and more self-abandonment becomes much easier. This is why you find Antifa constantly asking someone to denounce their whiteness. It’s a secret knock on their door. It’s how they know you’ve “turned.”

Collectivism is ‘sin’ for hipsters. It attacks our liberty like a cancer and turns us into violent drones.

We have all been brainwashed by something or someone. Racism is modern society’s version of “sin”. The goal is to abandon your own moral compass and submit to the group. Consider the case of Allen Armentrout, a fourth generation Civil War descendant. Allen stood watch for an hour holding a quiet salute while a crowd screamed at him. These people saw Allen standing in his own identity with zero shame for his history. This is perceived as a violent act to the hive. When people abandon themselves to the notion that they are so inherently racist, they will righteously participate in publicly shaming Allen and his attempts to honor his lineage.

I believe the “Men’s Rights movement” is actually mislabeled the white male movement which is really White Lives Matter. Notice how BLM marching through the street drew sympathy while the C’Ville incident drew blood. These men were outed and shamed for advocating for an identity. On many media platforms their message was distorted for the purpose of slandering the group. This is the hivemind shaming into obedience. I encourage everyone to take a look at this video for another side of the Charlottesville incident: https://www.youtube.com/watch?v=9jts0jHaUlA.

Individual freedom comes from objecting to all forms of identity politics. The “hive mind” holds its power through collective shame and self-hatred. The only way we can protect ourselves is to cast off the yoke of racism, sexism, and sin. This allows us to take up our own moral compass and hold ourselves accountable for our own actions. Indeed, it makes us more virtuous. Wearing our own compass can be a difficult burden. We confuse “hard” with “wrong” and can quickly take the easy way out. We have to reward individuals for their achievements and shun groupthink and identity politics. This is difficulty because the hive mind appears to be a natural effect of humanity. I think historically you could argue we have been bred by kings and lords to be this way. As men, we live as giants. As a hive we become an expendable drone of collectivism.

This is video from my call into Lift The Veil Too where I talk about this article.

Your 3 step cult program sounds like the Christian Church:

… interesting. Maybe everything is bullshit.