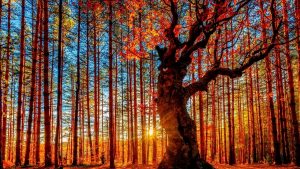 Yoki would not miss her sunrise ceremony to the ancestors. It was midnight now and Constantine’s war party was still camped below the tree she had climbed to hide. She had been laying up here in the branches unnoticed since midday. She watched the Roman heathens build their sloppy fires. Their skin leaked the aroma of beer and meat. They were oblivious blind men with steel skin and spears. They carried giant crossbows pulled on a sled. Yoki had twelve arrows in her quiver. She made four more from the branches she could reach. One tent had been pitched between her tree and the mound; a dozen more were scattered around the meadow. Tomorrow’s dawn would be her only chance to call the mound with her song. She was only four-years-old the last time the stars aligned. She might not be alive for the next passing. She remembered her mother’s song reverberating up through the roots as she lay flat on her belly in the grass listening above her.

Constantine sat at a table inside his tent considering his options. Subduing the heathens had been exhausting. He thought back to the cults in the streets of Rome. The Jews circumcised each other by blade and sealed it with their lips. They posed the most danger to political stability. They were the last to break under interrogation. He understood the power of a tribe bound by fear and trauma. It reminded him of these pagans infesting his father’s Britannia. Their resolve was as thick as root. They had no central leader to corrupt or install. Constantine’s own men were easily controlled by coin and violence. Each soldier made a public display of sacrifice to a common fire. Desertion by one man meant every tenth soldier was put to death. They were bound by a code of violence. Their obedience was rewarded with land, honor and the spoils of plunder. Morale was at an all-time low. His centurion had complained about the spoils, “Their only valuables are pelts. Their tools are bone. They grow fungus in their hair on purpose.” Constantine knew the pagans would need culture before they could be conquered. These human animals knew nothing of sin or salvation. They were relentlessly content in their own breath and this made them a formidable opponent.

We are children of Rome. We are ancient grandchildren following those same traditions. We pretend to be civilized by adorning ourselves in the robes of initiation. We mutilate our boys for allegiance. Our leaders parade themselves in fancy motorized chariots. We the people survive by clumping ourselves together in secret. Religion in Rome was as precise as a baker. Do ut des, “I give that you might give.” Each God had a particular recipe and flavor. The religious ritual drove the entire city’s commerce. It was precise, predictable, and in unison. There was attention to every detail and practice. Religion was social conformity. There was a proper prayer, ritual, or sacrifice for each occasion. We are the scattered tribes of Rome clumped now as Christians, Jews and Muslims. A tribe is bound by the pain of self persecution. We are the trauma alters of ancient civilization. We still live by their reset calendar. We forgot ourselves as we cast our wild selves into the fires of obedience. The natural law of man is found in one’s posture. Each of us a castaway from ourselves. Our beliefs are tainted by conformity. We see each other now through black mirrors as we sit on cushy thrones with wheels and swivel. We are subdued by the heat of luxury. We watch our kingdom kill for security that never seems to make it. Complacency pours out with our attention. We withdrew our own creativity by following the same tainted book of politicians. 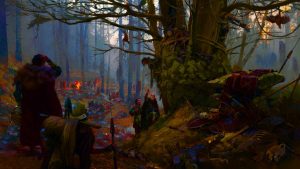 This is not a sermon or even a call to change. I merely drag a lead mirror into the middle this sentence. I polish it so you may look back into the centuries at your own reflection. We are the same now as before when we clumped in comfort and fear. Every animal migrates to a safe spot. A deer finds the high ground when it senses danger. The hunter leads the stag down the edge of a ridge to its own demise. The elite have been leading us this way for centuries. They know we never choose to turn and face our own discontent. We remain children of Rome running the predictable ridge.

Night fell and the stars came out as Yoki greeted the Milky Way from her tree. The soldiers were still camped all around the ancestor mound. She only had a few more hours to get in position. She climbed down the tree like a squirrel as the pads of her feet touched dirt without a sound. She darted away from the mound entrance to check the incoming sunlight’s vector. One of the tents would be blocking the way. She ran northwest to fetch a store of roots for a potion. It felt good to stretch her legs and lungs in the night air. She returned to the mound and listened to the tent for breathing. She crept her way to the mound door and tore the bottom of the moss blanket covering the entrance. She placed the moss on a flat stone and rolled it between her palms like flat bread. She split valerian root lengthwise with a bone dagger and mixed the juice with a tincture paste of red poppy. She gathered the oil in a pocket of stone and soaked moss in her tranquilizing potion.

She inspected the tent like an dog tracking bacon. She found the long iron tent stakes driven into the dirt that she removed and placed in her quiver. She held one tightly in her hand. In one deep breath, Yoki did the unthinkable; she climbed inside the soldier’s tent. She heard him breathing. She could smell his crotch and hot sweat. Yoki squatted beside him waiting for her eyes to adjust. The man was sleeping on his back. She shook the moss poultice to loosen any fibers. She tucked the first clump into the man’s nightshirt like a feeding bib. It draped softly around his chin like a mossy beard. She surrounded his head from every side with her potion of earth as she watched the lines of his forehead for signs of trouble.

While Yoki waited for the valerian potion to take effect she emptied his tent carefully and lifted each tent pole onto young logs she could drag like a sled. As an extra precaution she sewed the entrance of the flap together with straps of leather and rib bones sealing the soldier inside his own tent. She cleaned the doorway to the mound rock by rock so the sunlight could pierce through the keyhole entrance. When she was ready she came back to the tent. If he would wake up it would be as she was dragging him. She ran the soldier’s spear along the back of the tent and connected both poles of her sled. She gathered pieces of rope from the tent stitching and formed a sling she could wrap around her shoulders. She leaned against his weight and gentle dug her legs into the dirt until the tent yielded to her determination. Yoki drug her bearded burrito away from the entrance. 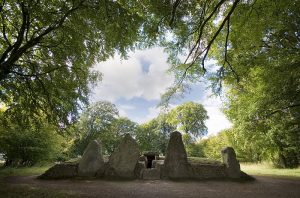 Yoki dove into the mound just in time as two watchmen walked the perimeter. They would soon hear the mound singing her song below their feet. She would not fail her ancestors. She would die here if it were needed. She knelt before her grandmother and whispered she had returned. Yoki removed her clothes and covered herself from head to toe in ceremonial white chalk. She smeared honey in her hair and all down her belly. She marked herself with black walnut powder in a spiral pattern of 13 rotations starting from her navel. She sang the name of each ancestor as she completed a revolution. At number 13, Yoki drew the line straight up her sternum stopping at the collarbone. She smeared the rest of the honey on her chin, neck and throat. She opened her mouth wide and stuck her tongue out as she poured the rest of the walnut powder into her mouth. She nearly lost consciousness as the dank spirit of the tree filled her nasal passages. Her eyes watered over and her nostrils heaved while she suppressed a cough. Her vision changed to shades of deep purple as her pulse began to race. She lowered her headdress to cover her eyes. She felt her way into the center of the four tall stones and sat down in lotus position. Yoki had no children anymore to hear her song. She bent her head back as far is it would go and began humming straight up at the ceiling. She felt each root bouncing their shape back from the vibration. She would hum softly until the morning light came. She was calling every ancestor back to the mound like a bell.

Yoki’s biggest fear was dying in the forest with no one to bring her bones back to the mound. She prayed everyday for the forest to make her this one promise, “Let me rest with my elders.” Yoki made the sun rise early with the love from her voice. Her body told her when to stop humming as it broke into a singing prayer. She sang and cried the name of each skull inside the mound. She was singing louder and louder as the bones activated from each family called to prayer. She could here the echo from the marrow in-between her breaths. The entire mound was teaming in electric purple luminesce secreted from the roots above her. Outside the mound, the grass was humming her song. Birds from miles away had gathered nearby in the trees and joined in. Dawn came like a ship pulled by golden sails and flying a flag of victory. Hung-over soldiers stumbled out of their tents to their feet to look around. They rubbed their eyes but it would not change the color of the music. The sky was an emerald pink fire and the grass was glowing from the tasty hue of mint. The men all looked up at nothing as Yoki’s song came bleeding from every leaf.

The trapped bearded soldier awoke inside his sealed tent and tore himself out with an angry knife. The poultice convinced him this wasn’t a soldier prank as he determined what had happened. Yoki felt the bolt from his crossbow poke through her lung and out her breast. She dare not look down. She would finish her song before the blood reached her mouth. She was crying through the final verse in joy as she realized the forest had kept its promise. She would die inside with her elders; the very last child of the pagan mound.

Dear friend,
After your great posts about satanism I watch you painting some completly deluded, whitewashed version of paganism impersonated by an innocent white witch, named Yoki. If we are all Aztecs, as you claimed, so wasn’t she an Aztec too? You seem to seat on the new-ageian fence and to crusade against Lord Jesus Christ. Paganism was never innocent in my opinion. You are seemingly under great delusion. Will you wake up?