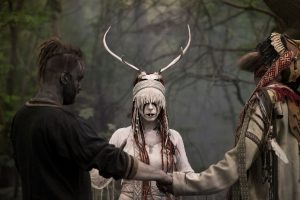 Yoki wore a headdress of stag antlers wrapped in fringed fox skin that covered her eyes so she could see. She was seeing with her ears now as she wiggled her toes and heels deeper in the thick cold gray mud. White chalk covered her entire body, face and neck like war paint. Dried black walnut powder stuck to her chin and lips and filled her head with the dank aroma of Samhain. She placed yarrow seeds in her gums that seeped a slow bitter taste that mixed with her saliva. She was a pagan light mother and her antlers vibrated the coming danger. She felt an army of 72 men on 36 horses. The clomping of each horse hoof from eighteen miles away rang like a bell through her body. Her antlers were a kind of radar dish she could feel in her skull. She bent her hips and wrists to pick up the intricacies of their signal. She turned and spun her head like an owl listening in three-dimensions.

Yoki was not nervous; fear was a new spice from a foreign land. Death no longer chased Yoki. It preferred her among the living. She promised him lots of trouble if he took her before she was ready. Yoki pushed the headdress up above her hairline so she could see again. She unglued her feet from the mud and climbed the ridge top to run west. She wanted to secure the ancestor mound before they got here.

Constantine’s war party had pushed north past Hadrian’s Wall. He was fresh from Rome to help his father’s campaign in Britannia. The ancient pagan tribes that infested the forest presented a challenge to traditional extermination. If only the climate were dry, he could smoke them out with fire. Their strongholds were getting more elaborate the further north he pushed. Their weapons were rarely forged and mostly consisted of slings, flints, and sharpened antlers. They were easy kill with a sword but the forest made it difficult to find them. He needed a way to control them. They were wild and unbroken. They spoke to God with their imagination. They were grown children without leashes living in his forest for free. For Rome it was taxable territory. For Constantine and his father it was chaos with teeth.

Yoki arrived at the mound and gathered her dress around the thighs and plopped her bare knees in the soft dirt. The doorway to the mound resembled an upside down keyhole. She squeezed herself into the bottom and crawled several yards towards the center before she could stand up again. This was the turtle mound and the light of the equinox would penetrate the sacred chamber tomorrow morning. In the center, four clean stones reach up to the vaulted mud and timber ceiling. They collected light from the entrance that reflected into four niches cut into the stone-stacked interior walls.

The rounded den is surrounded with skulls and bones. They have been meticulously cleaned and arranged by family tribe and age. Yoki places her headdress next to her Mother’s bones. She puts her soft lips on grandmother’s skull and tells her about the visitors. She is humming the message as all the bones in her family begin to vibrate from resonance. Yoki’s family shares a common tone; like the same key on a piano. Each generation is a higher octave. She is listening to her ancestors for advice. She promises to return before the ceremony. Once outside she covers the entrance with rocks and smears creek mud and sod in the cracks. She gathers thick blankets of fresh moss and the entrance disappears into the hillside. Yoki is armed with a longbow and quiver. She wraps sharpened antlers with leather and fastens them to her ankles like a pair of thorny spurs. Her kneecaps are wrapped in long straps of leather and she tucks river stones into a hip pouch for bullets. She is heading northeast to return to main camp.

Constantine was up against a decentralized tribe of pagans who followed their own intuition instead of an emperor. Constantine understood the heathen’s power could only be controlled by psychology. Pagan gods are manifestations of a man’s spirit. They are raw intuition running naked in the forest. Children are natural pagans. Adults are pagans that have been broken like horses. Imagination is the direct channel to our divine creator. Constantine’s personal vision of a cross revealed in the clouds was a consult with his own intuition. After all, he had a job to do. He needed pagans under his boot. Twenty years later, in 325, Constantine would convene 318 Bishops at the First Council of Nicaea to adopt the Nicene Creed. This centralized and defined a consensus of belief. The creed removes all elements of a personal and fluid imagination from the religious experience. It sets a central pyramid of focus to a single God. It defines it in black-and-white; right and wrong. There is one God. There is one Lord. There is one holy church. There is one baptism. This creed delegated belief to an external central source and established a bureaucracy that removed the creative and living divine relationship. The council of Nicaea was a senate body assembled to subdue the pagan imagination and curtail the jewish cult. 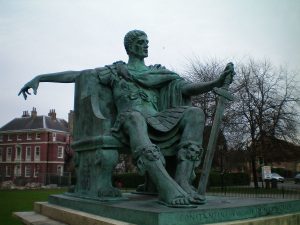 The very same Constantine would later order the death of his second wife Fausta and his own son Crispus who died at the hands of her false allegations. Constantine would spend the rest of his life cementing Saint Peter as the divine prophet of God by building the Basilica surrounding his tomb. The church adorned a mortal’s tomb with lavish riches and claimed him a member of a spiritual elite; everyone else is pushed further down the pyramid and away from God. Constantine removed our history and connection to the earth. He changed our entire calendar. We are still under the vision of a grand Roman Catholic Church ruled by Luciferians.

Satanism is not paganism. Paganism is the natural connection to our own bodies and the earth. Jesus was more pagan than jewish. According to the Gospels of Mary and Thomas, Jesus found the Cross, the Christ, inside himself. He used his divine intuition. The church and the state were institutions that sought to control and curtail man. The church convinced us we are broken. It slipped a golden yoke across our shoulders and told us our power came from staying meek. We are so much more than meek. We are crouching giants. Shame is a tool of manipulation. A life debt is a form of slavery. Constantine could not control a million wild thoughts in the forest. Every pagan held the truth that man is the living soil. God’s infinite seed is your body’s intuition. We are God’s moving definition written in flesh and bone.

We believe in one God, the Father, the Almighty, maker of heaven and earth, of all that is, seen and unseen.

We believe in one Lord, Jesus Christ, the only Son of God, eternally begotten of the Father, God from God, Light from Light, true God from true God, begotten, not made, of one Being with the Father. Through him all things were made. For us and for our salvation he came down from heaven: by the power of the Holy Spirit he became incarnate from the Virgin Mary, and was made man. For our sake he was crucified under Pontius Pilate; he suffered death and was buried. On the third day he rose again in accordance with the Scriptures; he ascended into heaven and is seated at the right hand of the Father. He will come again in glory to judge the living and the dead, and his kingdom will have no end.

We believe in the Holy Spirit, the Lord, the giver of life, who proceeds from the Father and the Son. With the Father and the Son he is worshiped and glorified. He has spoken through the Prophets. We believe in one holy catholic and apostolic Church. We acknowledge one baptism for the forgiveness of sins. We look for the resurrection of the dead, and the life of the world to come. Amen.

If history is correct. Like all projects, scripture is a script.

This spoke deeply to me. Cities and roads, commerce and civilisation, herding us like mindless sheep down the path toward the inevitable conclusion of this world system. The quiet call of God within, outside of convention and rules, outside of mind control and group think, the call to freedom, free reign and the infinite. Thank you James.

I completely agree with you. I was born into the Catholic Church and reading the Nicene Creed in your article–well, even though I haven’t attended church in many years, I know every prayer, can remember every word to every song. I can remember the smells, the holy water, the pews with the kneelers…but mostly what I remember is the FEAR the church put in me from the moment I was a part of it. Fear is a terrible way to live a life.

The weird thing about being Catholic though was that no one ever had us read the Bible. We heard the little stories (Noah, the birth of Jesus etc.), but were never encouraged to read the Bible. When I was an adult, I felt compelled to read it and I read it cover to cover three times, studying what was written. What stunned me about the Bible was how violent God was, how vindictive and murderous. And it was through reading the Bible that I came to realize how ridiculous it was that I was told (and believed) God had “chosen people.” God says in the Bible as one of His rules that He is the only one and to put no other Gods before him which implies there IS more than one God.

Long story short: After studying the Bible for at least a year, the one thing that rang true for me was when Jesus was asked in the New Testament when the kingdom of God should come and he told us the kingdom was INSIDE us (Luke 20-21). We’re always being told to look elsewhere for answers in an effort to take our power from us. The answers are inside! This is why I dislike the victimhood movement where everyone loves to be the biggest victim. We need to trust our intuition and listen as it guides us. We need to take our power back and stop looking for someone else to save us.

I often think we’re born knowing everything, and life is the process of forgetting all that we were born knowing, that life is the journey to finding our way back to that place. This is why I love spending time with children. They hold the secret to what I want to get back to…to what I have forgotten. They are real, they live in the moment, they are fearless, their imaginations hold the creative genius we are taught to ignore. We can create the reality we want, but we’ve forgotten how to do it, we’ve been told we need help from government and from an off planet God. The kingdom of God is inside us. We have everything we need inside.