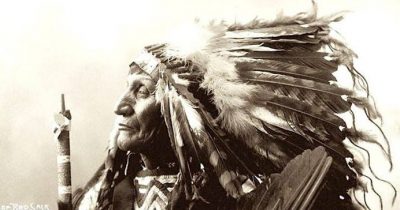 We traded our elders for politicians. The Wounded Knee massacre was the same blueprint as the Waco siege. The government did not change or learn. It simply got stronger. These horrors were done by the government not the people. We are under the possession of the State. We cannibalize ourselves by chewing away our own feet. Crazy Horse was stabbed in the back. Sitting Bull was shot by his own people. Spotted Elk was shot by his own army. Geronimo died a war prisoner. Regardless of your race, these are our elders. These are forefathers of American soil.

History is a commodity and government hordes it. We literally pay them to take vital information away from us and bury it. In the first colonies of America, it was illegal to run off and join the natives. You were shot and killed for integrating with the soil and its history. The government renamed the land to own it. It erased it’s identity with labels like North and South. The same government today tells you it is wrong to wear or possess a feather of the eagle.

“When the Eagle returns, we will again be a great nation.” — Jonas Shawandase

Sovereignty is a golden eagle. Our elders were sovereign chiefs. The government gave them poison. How is that poison any different than today? Does the EPA protect and honor your land? Does the CDC protect and honor your DNA? How is today’s poison different from blankets with smallpox or Indian whiskey? How is the Trail of Tears, not the doing of government? We must give the land back to the Indians and integrate. We must build a tribe of campfires and recall the songs. We must exchange the feathers of eagles, hawks, and owls. We must carry ourselves as the living soil. We must do the very thing government says we can’t. We must be free.

The purpose of the Civil War was to build up an army to exterminate sovereignty. Nearly one third of the Eastern Cherokee nation was white. Nearly half of the Seminole tribe was black. Integration was happening naturally by bioregion. Creek became Cherokee. French became Huron. Pilgrims outlawed long hair to stop their influences from emptying their villages. The Roanoke Colony abandoned England to merge with the Croatan. Hernando De Soto posted guards to keep his villagers from defecting. This was a problem for the machine as more settlers were joining the nations. The People of the Longhouse, The Iroquois Confederacy, was a working government in place for 500 years. We fell when we became too centralized. We preserved a union by destroying each of its states.

“No European who has tasted Savage Life can afterwards bear to live in our societies … The Care and Labour of providing for Artificial and fashionable Wants, the sight of so many Rich wallowing in superfluous plenty, whereby so many are kept poor and distress’d for Want, the Insolence of Office, all contrive to disgust them with what we call civil Society.” – Ben Franklin

We are victims of our own Leviathan. America was made into a puppet with strings. Those strings were pulled a committee of men in the business of slavery. General Custer and his men were ordered to leave Appomattox Courthouse when the Civil War ended. They drove north to focus on Indian removal from Ohio to Montana. His job wasn’t over. The Civil War was phase one of an extermination program disguised as emancipation. Burning the south was necessary to break the spirit of the land.

We know the truth when we listen to the land.

So listen to the land. The way out is in. Tap into the sigils of nature before they are gone. Learn to draw a charge from what brings you back to the soil. Abandon the sigils of Babylon. Welcome the sigils of nature. Know the icons of the forest better than the logos of Baal. Asherah is the spirit of the grove. Baal is the spirit of concrete. Asherah has been cut down and forgotten. The Indians call this circumcision, wetiko – the walking psychopathy. It is a possession caused by self-mutilation and cannibalism. It’s the shock from our lack of connection.

We grow new roots in the soil. We find home in grounding. God is not in the sky. God is the ground underneath. I know because God is good. Evil magic is overpowering. It comes from above and makes you shrink. White magic is empowering, it comes from below to raise you up. Our ancestors are underneath us. We gain charge by remembering. White magic always remembers. Black magic always forgets.

Early eighties I took lessons from Hief Two Trees,medicine man of the Cherokee Nation chief of the Bear clan ,in Old Fort N.C.
At the tme I was keen on Hermes,still am . The Chiefs visions of I had always considered it only from above.
“As above so below ” spoke to Mother Earth producing human Nature .
And as an elemental salt . Hmmm

It all comes down to: God is Good. 🙂 Well written, and very wise and important words.

The Eagle conveys the powers and messages of the spirit; it is man’s connection to the divine because it flies higher than any other bird. The eagle is symbolic of the importance of honesty and truthful principles.

Remember: The government has NO power. It is WE the people who give them power.