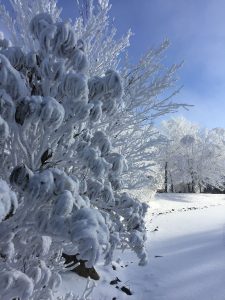 The trees were crusted as I take a bite of last night’s snow from the spoon of a branch. My posse of canine grabbed all the sun we could catch with our tongues in the twelve degrees of cold. The sky was clear despite the sound of snow machines blowing their product on the resort across the road. Artificial snow has no crystals. The flakes look like tiny snowballs dipped in ice. I see a neighbor and we discuss the new wolf-coyote hybrid spotted recently in the hood. It pushes the deer into my yard for shelter. This morning a four-point buck caught me looking at his doe. She’s carrying already. The red boomer squirrels have been pushed out by the larger grays. This mountain is shifting its habitat. I feed the dark-eyed juncos as much sunflower as their wings can carry. A feral cat has moved below the porch. My hounds are too old to give notice.

The truth is a bitter root. I ask Twitter today, which is more likely to be true: A) Every news story is scripted or B) Trump is a Time Lord. The responses leaned on the belief that Trump had mastered time travel. This experiment reminded me of why I have been so quiet lately. My truth has been shaken instead of stirred. I watch the reality of human trafficking marketed alongside a story of blue birds from outer space. There is a fine line between the truth movement and a belief movement. This line has grown too squiggly for my feet. I worry we are slipping into relativity – something very dangerous to an individual’s power. It reminds me of the day someone posted “Everything is scripted.” This idea hit me in the gut and I rejected it. It stripped me of all my passion for the world to think it was all just furniture on a stage; Wikileaks, QAnon, atomic weapons, political parties, mainstream media, the oil crisis, and every Middle East war. I refused to accept every bit of it was a lie. I used to believe a majority of what we have been told was true. But now I accept the deeper pill. Everything we learn in compulsory school is tainted in programming. Every piece of media we are exposed to nationwide has been chosen first as a tool of manipulation.

My next novel is in a conundrum. It’s a compelling story of artificial intelligence and one of the main characters is a satellite. I created this character two years ago. Since then, my mind has been dragged along the cobblestones through the Great Awakening. I am a bit scuffed and frankly, I don’t even know if satellites are real. All we see is 3D renderings. It’s reported we have tens-of-thousands in orbit from the size of school buses down to small drones launched from the ISS. I find myself wanting to draw a line somewhere. I do not have the ability to experience a satellite directly. Indeed, everything I have been told about space is hearsay and/or theoretical. The same institution tried to sell me on evolution, JFK, and 9/11. It’s like our partner has cheated on us again but we are totally sure it’s the last time.

It makes me grateful for the comfort of direct experience. Our senses come with an integrity we never have to question. It reminds me again of the true power of good psychology. How does a belief make you feel? What is the cost of believing it? The truth movement is built on assumptions. We build towers on hearsay because it’s the only information we have. But living on a scaffold of assumptive truth is dangerous to our psyche. We need to come down once in a while and plant our feet in the soil. What you directly experience is the only thing you know is true. I have lived on this mountain for over a decade and never seen a wolf/coyote hybrid. It’s a truth my neighbor and I share. We share truth as a communion. Truth is the fruit of our experience.

I believe this is the meaning of the rise in flat earth psychology. Flat earth is a direct energy weapon against implanted propaganda. It requires the practitioner to reevaluate every feather of belief that’s been laid on the mind with no direct experience. When you start to carry thoughts of flat earth in public the ridicule and counter-programming is brutal. This is a blessing for it causes you to center yourself deep in your skin. I recommend holding flat earth psychology in your mind as a type of meditation. Let it center you directly inside the authority of your experience. Tell the mind everything you’ve been taught was just a painting on a canvas from someone who painted you a story.

I love empiricism and stand firm that earth is exactly what we experience it to be, not something I’m simply told it is without falsifiability.

Biomimicry. Nature has all the answers to all of our questions. To glimpse at our potential we need not look any further than the Orchid species. For me, the Orchid is natures voice. It tells us what we are capable of. Look at a photo of the Clown Orchid, nature is laughing. Look at the Bee Orchid, it has created the exact same chemical pheromone as the pollinator it requires. This is created, not evolved. The Black Orchid defies the laws of nature, nothing else in nature is black.

Whenever you are low or in doubt about your potential, look at photos of orchids. Buy some for the house, have them near.

Enjoy James, you are a great man. Your work is beautiful, no doubt you suffer pain to produce it. Every master suffers great pains to create masterpieces.

Thank you James for fighting for the truth. You’re a warrior-poet. A sage on the mountain. You helped me to see that Dostoevsky is right that “beauty will save the world.” You’re already doing it with your art. You helped me to realize with your life and work that beauty, like truth, is hard-fought and hard-won. Beauty will save the world, but it won’t be easy at all. I’m just starting to make sense of this dark world ruled by evil monsters.

Your message is a synchronicity for me right now as I center myself deep in my skin and the authority of my experience. I’m getting off the internet for a while to rebuild the sacred shrines of my body and mind that collapsed under the burden of truth. I exorcised the Luciferian programs in my Self. I started to pray to and worship the only deity I can ever really know and experience—the God within. I hope my words will help you in some way to solve your conundrum. You’re already winning. Keep winning some more.

A direct energy weapon is the removal of empathy. It’s the string that binds humanity. It’s being pulled like a loose thread in a sweater. Soon we’ll be naked.

BEAUTIFUL PIECE! You are gifted (and handsome lol)