On Oct 13th, a Honduran horde formed a caravan around a barrel of cash and set a vector for the U.S. border. Right now, they are 7,000 refugees strong and traveling 1,700 miles up the artery of Central America. Trucks and supplies are dispersed through crowds that push through police barricades made mostly from paper. The truth movement calls it the handiwork of George Soros but consider who else benefits from this serpent winding its way up the giant bird of Mexico. 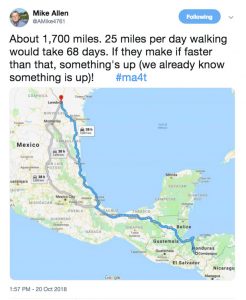 This crisis smells like the Democratic party’s staged riot in Charlottesville. Finding that many tiki torches within a hundred miles of the city would have been impossible. The local police were seen on camera squeezing red protestors through a gauntlet of blue protestors like a push-pop into a desperate hot mouth. Even Heather Heyer’s cardiac arrest was mislabeled a vehicular homicide. Charlottesville was corporate propaganda delivered from a convoy of chartered buses from out-of-state. The goal was racial trauma through a camera. The Honduran caravan is scripted by the same media. It started in the streets with a few sacks of cash and a crowd of desperate people. The media will sell free tickets to Trump the Xenophobe versus the Honduran Exodus of Children. Their timing before the midterms is impeccable. As impeccable as the NBC tape dropped during the last election. Trump is the lion speared into the media’s colosseum. The stakes were already high in Charlottesville and they’ve raised them by five countries and thousands of people. The media is actively working against our President. They are working against foreign nations under cover of our First Amendment. The media isn’t even a person; it’s a subversive machine of deceit in the hands of the vapid. They have sparked a civilian army of foreign flag-waving refugees pushing themselves through police and smiling for the camera. Mexico sent 500 police to the Guatemalan border and it did nothing. This is all the proof an independent voter needs to vote red in November. Could the opposition be this desperate and out of touch with their own propaganda? This tactic seems like a desperate move from a bleeding monster. If you want to build a wall, hire a Honduran horde for motivation. This is so much winning before the midterm elections. Even Trump’s threat to cut aid to Mexico is a win-win for his administration.

You can be certain someone with deep pockets is helping. These same pockets own the media. NBC News even admits the caravan grew from their own coverage. Desperate families in need of work are unable to travel without resources. Imagine thousands of average people hiking the Appalachian Trail without supplies or money. Their numbers should be dwindling the further they travel but the crowd keeps growing. NBC News calls it a migrant caravan “from the impoverished, violence-plagued country.” This tells you the goal of media to divide the nation by its sense of compassion. The only time we are brought together by the media is after a national tragedy. But most of those are used as cover for something sinister. Imagine we had no central media. This kind of propaganda would be difficult to instigate and distribute. Right now it’s as simple as a 4AM email from a satanic rooster.

When a country is sick, it needs antibodies to fight infection. The media is bleeding Honduras by instigating a mass exodus of its lifeforce. How does a body heal by sending its most hopeful away? Why are they not organizing a local march into their own towns and capitals? They can’t because the people are not in charge of this migration. The media pulls the reins. The people are misled by promises and propaganda from an American cabal. American news outlets will never be held responsible for what they’ve done here or in Charlottesville. NBC News thinks people and country are expendable. We are watching the media throw everything they’ve got at Donald Trump. When will we hold them responsible for international political terrorism? Seriously, when? I keep calling it out but they always seem to get a free pass.

My new book is on shelves now! Click here to add it to your cart.