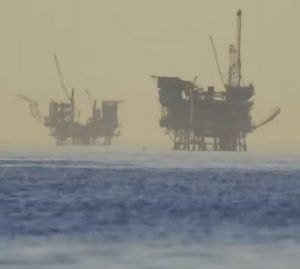 Before sunset, on the coast of Miramar, Hardy walked Lyra down to a crashing beach. He gives her the camera as he points her hazel eyes out at two oil platforms and names them, “Platform Habitat, nine miles. Platform Hillhouse, six miles.”  She placed her eye in the viewfinder to zoom in on the steel rigs sticking out of the sea. She sees the silhouette of industrial flamingos hanging their necks over the edges. Hardy asks her, “Can you see the pillars under the platform?” Lyra answers, “Yeah. So?” Hardy explains, “So, you shouldn’t. Nine miles is over 20 feet of curvature. How does a satellite orbit a flat world?” Lyra stood erect and looked at Hardy square in the face, “Why are you doing this to me?”

Hardy answered, “Because NASA is a psychological space program. And all six lunar surface missions fell under the Nixon presidency. Is it that hard to believe he’s a crook? Companies like yours convert their business from war to space. What’s the markup on a Pentagon-grade hammer made for space? Understanding how a conspiracy as big as 9/11 could happen is easy when you understand Nixon and NASA were lying about the moon. Even easier when you understand they lied about JFK. If you think we can’t be that gullible consider how many still believe in the integrity of Clinton; or anyone in the Bush syndicate. The list is long and drenched in bloody gravy. Put yourself in their shoes.”

Lyra is speechless so he leans in, “If you thought people were crops you’d treat them like animals. You’d keep them on an island and farm them like a resource. You’d build a wall of ice around them. You’d geld them psychologically. You’d keep them separated and play music to make them dance. You would breed them to manage themselves and you’d care little about the quality of their experience. We are crops, Lyra. Instead of roots we have veins. They dump coins in our trough and charge interest on what we eat. We are living on their property. Each of us are sharecroppers on an island of meat toys. Everyone sleepwalks insisting it can’t happen. Not here. Not now. Not today. Society is far too clever and shrewd to fall for something so monumental.

The strength of a fence is found in its material – but the power lies in its ability to provide distraction. An animal sees no future behind the pickets. A cow will only go where its mind thinks. We look up to the sky because there’s no fence. We grip our toes to a pinball of scarcity and insist our footprints are ruining it for the planet. We cosplay gasping fish who fornicated ourselves into balding monkeys with tools. We are desperate for a savior as we reach for anyone but each other. We are a planet of alters with constant amnesia who don’t even know where we live.”

“You’re an asshole, Hardy Maxwell.” Lyra slapped him fast and hard across the mouth. He saw it coming. He had been more concerned about his testicles. She spit to his face from her teeth, “You know what I do for a living. What the hell is wrong with you?” Lyra was enraged at this assault. it felt like her gut had been winded. A man she loved telling her the last decade of her life at Lockheed was a lie. She wanted to say it was because he was jealous. Her endocrine system was building pressure. It needed Lyra to render her verdict so it could store these feelings properly in her bloodstream. She told her body it was because she wasn’t good enough. She told every one of her blood cells Hardy never believed in her. No man ever had. Her system responded to the order and the industrial line continued as new T-cells were formed in the truth. She was reborn in that moment. The steel thought was hammered into her RNA. All of these amino proteins sparked from the lips of a man she wasn’t even touching. She forgot she could be vulnerable in the ocean of men. Lyra watched the sky sink with her mood. She was too thirsty to throw her drink in his face. She considered a knee to his testicles but deflated herself instead, “This is why you live in a gas station, Hardy.”

That was the second time Lyra would abandon Hardy on the beach. The last time there were howler monkeys laughing in the trees. Hardy was used to the laughter. His planet had lost orbit a long time ago. He was living in an electric universe.

Make truth your experience. Place your feet behind those eyeballs and grab the reins of your optic nerve and say, “Whoa, fella.” Pat the neck of your horse till she blinks. Both of you are animals peering through the fence. Gather your questions like arrows. The true shape of this pasture lies beyond this fence. We will blow it down with the power of observation.

I was 12. It looked fake to me. Odd brightness. I took pictures of it with my camera as the tv blinked its images. I still have them.

Perhaps I should study them.

The only thing that is a certainty is that the “official” story is a lie. Whether it is a lie of omission, misrepresentation, outright fabrication or some combination of the three remains to be seen.