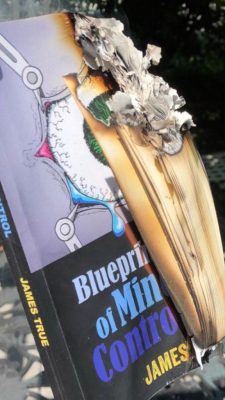 I know how truth works now. A former fan has burned my book and posted a photo. It accompanied a 20-part thread on my failures as a human being. As if each of us doesn’t keep our own working list. Curiously, I traced the root of their disagreement back to my views on corporate Pride Month. I spoke out against sodomy and this is what it brings. We are surrounded by the broken who insist no one should say a thing about it.

To review, sex is magic. Sodomy is black magic. The sex ritual causes an egoic breach. You drop your lifeforce like the defense shields on a starship. You become vulnerable to attack. There are dark shadows hiding in the trees. We drop our shields and they enter to infect the crew. These are possessions manifest as cravings for depravity. Poor food choices. Poor thoughts. Poor decisions. Being against them makes me a homophobic bigot. If June was Butt-sex month I’d be saying the same thing.

My book has officially be martyred by sodomites.

Let this be proof. What we call reality is a vast conspiracy. So many are hungry for the witch. Injustice creates an addiction to justice. It doesn’t matter who burns as long as these coals aren’t wasted. The narrative moves across the carpet. This is why unity is not our strength. Unity is the get-away-car of empathy jackers. They blindfold a hostage and throw them in the van. They’ll be Patty Hearst by tomorrow. Self-empowerment is our strength. Self-supremacy scares the crap out of government. They shame that word every day because it’s so dangerous. If Breitbart wanted to fix America, they’d publish an expose on 42 False Flags. Media is more the government than Congress could ever be. The drum major of our thoughts is a five-headed snake and rattles a wand. The cause of the fire is still unknown in Notre Dame.

what a shame that I find you are homophobic lol. This is a similarish disappointment I have had since getting online (quite a few long years now) and post 9/11 when i found that ALL the investigators into the hidden clues of 9/11 were either christians OR new agers! I am coming froma Goddess perspective, and yes I have learned a lot of important things from christians and new agers, yet still they all seem unwilling to examine their own myths like they do the ‘illuminati’s and either totally ignore me or get hostile if i dare question theirs.
I am gay. So what do I think about your take on ‘sodomy’…ohh that old Bible loaded term. Well look at it this way. I am supposing you are straight and like sex with females. And I am sure when you are with one who attracts you you feel passionate, and may eneter her mouth with your tongue and she yours? Well guess what, us gays are the same. AND like you we ALSO like to enter the lovers body in other ways also, and have same done to us. it is called passion, lust, love… Quite simply really

I feel like if you read what the author wrote you would find that he is not homophobic…jeeze.

Is it possible to buy a book without using Amazon?

Yes. Follow this link to get a signed copy. https://www.jtrue.com/books/bomc.html

Indeed. Joseph Sciambra saw through the LGBTQ brainwashing after living 12+ years as a homosexual man. This is a real eye-opener!  #GraphicWarning
https://youtu.be/rD5VKUVPxXo

Sodomy is a back door to knowledge to the gnosis forbidden for our own good.

Horus was reportedly sodomized by Set(h) and by some accounts also sodomized Seth in return. Hermes, is also strongly linked to this practice. These are the gods of sodomizers, servants of the serpent sodomizer Satan himself.

Hermes is a sodomizer. Those who practice Heremeticism are sodomizers.

The presence of Elohim spirits usually indicates Freemasonic programming that is installed by sodomy.

The most vulnerable age for preparing a person for mind control is between 2 & 4 years of age because of the development of the child’s mind at that age. Traumatic things can damage them worse than if they were younger or older. Also, in order to be programmable there needs to be a change in the way their mind works between the ages of two and four. That change can only be achieved by sodomy.

It attacks the nerves at the base of the spine and causes something neurological to happen within the brain. It also has a spiritual, demonic component to it that affects the person’s mind in a way that nothing else will. In other words: for a person to be able to develop multiple personalities, they would have to be sodomized between two and four. 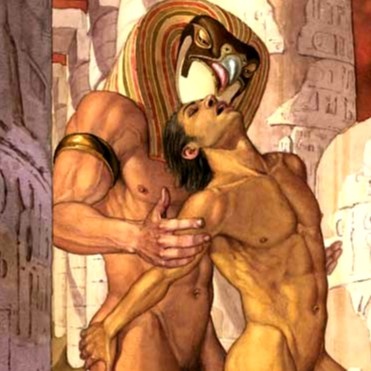 “Humans are not naturally designed to receive anally. When a man and woman have sex they have the potential to create life, when two women have sex they do not, but when humans commit sodomy they are more likely to create disease, sickness and death”.
People who have anal sex, have very specific health problems. I’ve heard about men having to use tampons to stop anal leakage and that’s far from the worst of their health problems that I’m aware of!!! The practice of sodomy also leads to the need for bowel/colon/rectal reconstructive surgery because of the damage this unnatural act causes to the human body. Like alcoholism and drug addiction it is not appropriate to promote sodomy as healthy and normal because no matter how we dress it up, this is not natural.
I have every sympathy for gender-confused people, but the social engineers who are trying to force us to accept the LGBT(P) condition as normal and something to be embraced a la Bruce Jenner do not have humanity’s best interests at heart, this is really not going to bode well for humanity.
The anus is the point of exit for the body’s waste disposal system, with all the attributes of decay, including a wealth of bacteria and foul odour, nor can the rectum accommodate the activity of intercourse without the high probability of injury.
It’s sexual suicide and human depravity gone mainstream.
The anus is not a genital, and of course, this act mocks the creation of new life. It is essentially the opposite, the continued practice leads to sickness, disease and death.

Why sodomy is so important to Satan.

Well said! Someone jst mentioned about “gays” (and who usurped THAT cheery word?) thinking the vagina is dirty but the anus is not – go figure!

Hi frends,
Black magick or not, I would like to add the satire of a famous polish arist, summarizing the LGBTQ…. ideology nicely….
https://images.app.goo.gl/VfLBxW8qXb8GKWSG6
translation: “Citizen, do not f*ck futilely”
Have a nice day

“Unity is the getaway car of empathy jackers”. Brilliant James.

The book burner’s accusations were empty. Where was the spell they accused you of? I read the book. The only spells were the spells of consensus the book reveals. The spells the world uses to bind us to the lies it creates.