The 2015 Electric Forest Earth Dragon occupied the heart of Sherwood Forest in Rothbury, MI for a crowd of 40,000+ and the finest String Cheese Incident I’ve seen to date. The Reincarnation Crew welcomed me into the fold and we joined creative forces to create a magical village of light and magic. The crew consisted of artists, builders, craftsmen, gardeners, engineers, climbers, mechanics, lighting designers, zen masters and pirates. The cohesion was rampant and addictive. Everyone’s project belonged to all of us. Ideas were sparking everywhere and the creativity soaked every pore. The family atmosphere was instant and each day we required less words to convey our feelings and direction. It’s what you dream of plus all of the unexpected magic that comes with it. This is my third dragon sculpture in less than a year and i can’t believe i’m along for the ride.

About the dragon. This dragon was made with 1150 bamboo scales cut in my lab on Beech Mtn and brought to the site. Upon arrival we picked a spot and wrapped the irrigation tubing around two trees. The idea was that the dragon spiraled around one tree before digging into the earth and rising again and spiraling around another tree and reach up about twelve feet out of the ground and staring visitors in the eyes from a stair platform on the newly constructed art gallery in the sky. We used three guy wires to suspend the dragon and the wind played well with the dragon head and neck giving it a beautiful wind dance to watch. There was a severe winds warning and the dragon help it’s ground without any problems. For the eyes we suspended two Himalayan Salt Lamps and wrapped the head in appalachian moss. We gave the dragon some hand scraped bamboo teeth and a third eye. This dragon totaled 25′ in length and stood 12 feet above ground. It had a mane of living Ivy and was adorned with flowers. Below the dragon we built an infinity bed of boulders and added some plants for a mood. The festival’s response was very positive. A spontaneous giving tree was formed under the dragon which got so big we had to move the giving tree to another location with a dedicated sign. Energy healers gathered around the dragon to practice their craft and Krystal, one of the live painters, incorporated the dragon into her canvas.

Listen to your Papa and, “Dream out loud, And make no sound. Find your cloud and ride it ’round!” Thank you forest family, thank you Reincarnation Crew, this was so much fun to create with all of you! 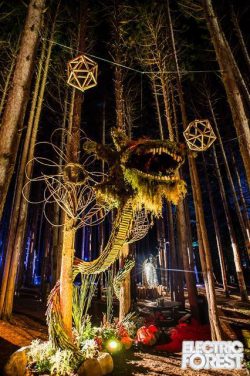 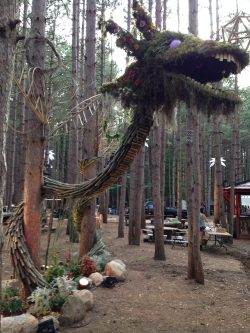 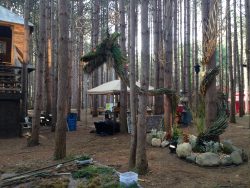