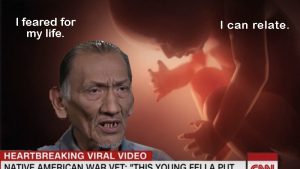 The March for Life Rally in Washington DC took place last weekend. Nathan Phillips was there to hunt white buffalo with his camera. Nathan is an activist. He was there to prey, not pray. He does this for a living. He found a group of calfs on Friday waiting for a school bus outside the Lincoln Memorial. Nathan spotted a young, healthy buffalo and cornered him with his drum. He played a song of protest telling the tale of white settlers murdering his people but said it was just a song of prayer and meditation. The white buffalo calf he stalked bore a red MAGA crest on his head and would make the perfect kill for the camera. The student never blinked as Nathan approached him. He was stunned by white guilt and committed the face crime of smiling.

Nathan subdued his prey and pounded his drum in the child’s face for the cameras. The students were there to participate in the March for Life. Nathan’s tribe was there for the blood of attention. I know this because Nathan tried again at a church mass on Sunday two days later. I would say Nathan was brave but he was a coward. He said so in an interview on Democracy Now. 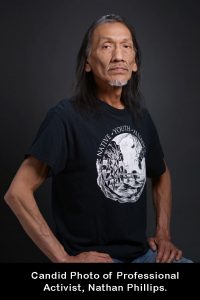 Interviewer: “The young man who was staring you down, did he say anything to you?”

Phillips: “God help me. I was absolutely afraid. There was a group of over 200 young, angry white men. Who were displaying mob mentality and they were facing down just four individuals.”

Nathan was referring to a small group of Black Israelites were also hunting the young white buffalo. They were recorded on film taunting the students with racial slurs. The students were taunting back. Nathan used the black tribe as cover for moving in on the teenagers.

Phillips: “When we came face-to-face with Mr. Sandman (a student) I looked to the Lincoln Memorial as the high ground,” and “closed my eyes and prayed.” “They surrounded us.” “He stood in front of me and blocked my path.” “I was just praying.”

Despite all the prayer and fear, the weekend wasn’t over for Nathan Phillips. On Sunday, he wanted more buffalo. Him and his hunting party would use the March for Life as an excuse to empty their horns of powder. Nathan was versed in the black smoke of media. He used the black magick to infiltrate a Sunday Mass at a Catholic Church on Sunday morning. “Just tell them we are here to pray” was heard as some of his men tried to enter the cathedral during the service. The ushers at the church were much older than the students waiting for their bus. They stopped Nathan’s men at the door. The white guilt failed to charm them.

About the only thing worse was it happening on Martin Luther King Jr. Day weekend. This is how black magicians recharge their sigils. First they create the martyr by propping him up and killing him. Then they collect the energy of self-hatred by blaming it on racism. They’ve been running this harvest since Memphis in 1968. These are black smoke warlocks with experience. Consider the latest ingredients: There was a red MAGA hat. There was an indigenous drum. There was an assassinated civil rights leader. This is how you poison a Pro-Life Rally.

Our media is at war with our people. The same black magick that convinced people Donald Trump raped someone on an NBC News tour bus is still behind the wheel infecting our minds. Our tribe has no defense against these kind of arrows. We insist we can live out in the open with trust for anyone who sends news into the village. We must grow up now. We must start our own fire and send out the white smoke of truth. The media is a marauding horde and our brains smell of sweet fat for the taking. How can we raise our children in the mental pollution of black smoke. There are thousands of Nathan Phillips out there waiting to take the stage. They are charmed so easily with the shiny beads of attention.

I was talking with friends on Twitter this morning about Nathan Phillips and his hunting. It dawned on me we weren’t discussing the March for Life at all. We weren’t discussing how New York just legalized abortion up to the date of birth. Nor are we discussing that you don’t even have to be a doctor to perform the mutilation. None of us are talking about this because of Nathan Phillips’ hunt for the white buffalo. We are surrounded by distractions from clowns pulling the strings of smaller clowns. I see Nathan on a mission for attention. He was used by a media mega-monopoly to subvert the efforts of hundreds of thousands who attended a March for Life Rally. Did you know over 350,000 signatures were amassed on a petition to end abortion? Did you see how many cities had huge turnouts over the weekend? This did not make the news. An event millions of people across the country participated in was overridden by a story of four black Israelites, a high school class waiting for a school bus, and an activist pounding a weak narrative on a drum during a life rally.

Abortion is murder at worst, and mutilation at best. If society wants to fund or protect the right to mutilate oneself with a SCOTUS ruling or a constitutional amendment, something is wrong with that society. The media knows this. It’s why they have to hijack the narrative. At some point you need to start questioning why the media is always on the side of eugenics.

Says you who has never had a period…or skipped a period. Who has no knowledge of living in a female body. Who has never been pregnant. Who doesn’t get the concept of old men (priests and their politicians) that hate women and will go to any length to devalue and control them and their bodies.

Someone on Twitter suggested that the moms who abort their full-term babies be forced to eat them.

Snowflakes can’t handle the truth what happens to these babies after they’re aborted. The Alyssa Milanos don’t want you to know that’s what happens to your aborted baby. Better the mom to eat it than strangers, right? Then they would repent, and keep the baby, stop the abortion, right? Realize the absurdity of eating their own child.

Would that stop them, though? Or is their mindset on “kill”?